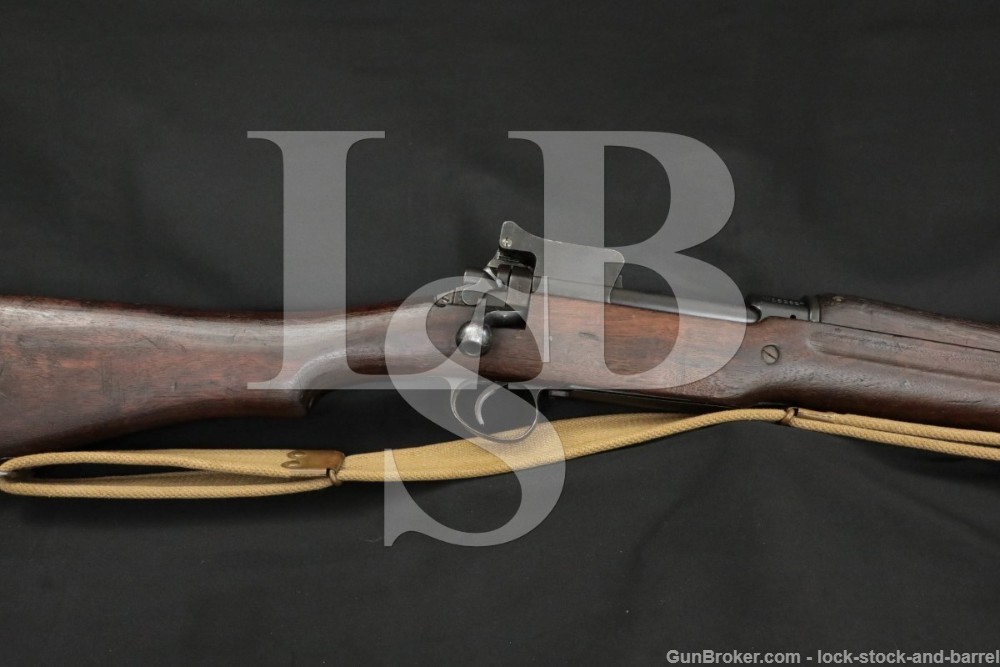 Stock Configuration & Condition: The wood stock shows numerous scrapes, scratches and compression marks. Several have damaged or removed small portions of the surface wood. Most of the marks have been finished over. The buttplate shows scrapes and discoloration from oxidation. The refinished stock hardware shows scrapes. The LOP measures 13 ¾ inches from the front of the trigger to the back of the buttplate. The stock rates in about Very Good condition as refinished.

Bore Condition: The muzzle & grooves are grey. The rifling is deep. There is fouling and intermittent erosion at the muzzle and in the grooves.

Overall Condition: This rifle retains about 95% of its metal finish, as refinished. The metal shows scrapes, small scratches, and a few small areas of oxidation. Most of the markings are deep. Overall, this rifle rates in about Very Good condition as refinished.

Box, Paperwork & Accessories: The rifle comes with a web sling. It shows discoloration & light soiling on the webbing as well as oxidation on the metal. Overall it is in about Very Good Plus condition.

Our Assessment: This Pattern 1914 Rifle made by Winchester as a contract rifle for the British during World War I. This P14 has been refinished but still retains many of its original markings. The rifle’s volley sights are intact. The rifle is in Very Good condition and can still do a ton of work out at the range.