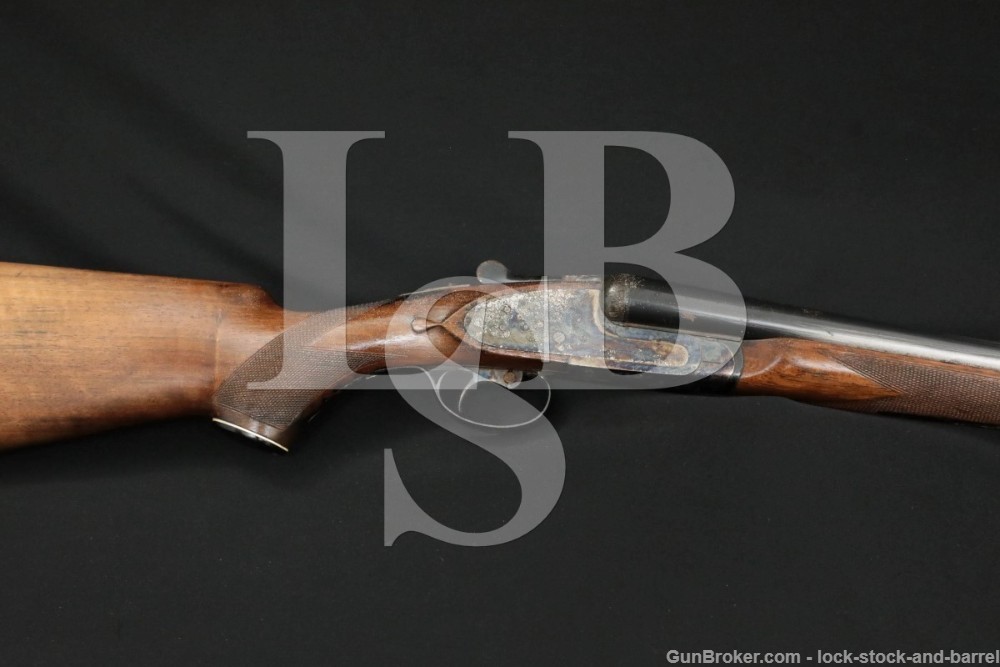 Markings: The right barrel is marked “AYA–AGUIRRE & ARANZABAL – MADE IN SPAIN”. The underside barrel flats and barrel lug feature various factory stampings and proof marks as well as the AYA logo, “O*1” Spanish date code, indicating the year of manufacture as 1970, and the serial number “336672”. The interior of the forend iron and wood are marked with the serial number, “336672”. The water table is marked with various proof marks and factory stampings as well as the AYA logo and the serial number, “336672”. Areas of the barrel, barrel rib, receiver, and trigger assembly feature fine scroll engraving. Both Holland & Holland-style side panels are marked “AYA AGUIRRE & ARANZABAL”. The barrel latch has a gold AYA logo over “II”, the barrel latch is marked “II” and the top-rear of the rib is marked “I”.

Sights/Optics: There is a silver-colored bead fixed to the front of the barrel rib. The top of the rib is textured to reduce glare.

Stock Configuration and Condition: The stocks are two-piece checkered walnut with semi-beavertail forend, capped pistol grip, straight comb and checkered black plastic AYA buttplate. The forend has a few scattered minor marks, spots of dark discoloration, some tiny spots of white residue toward the rear, and a small spot of warping at the bottom-rear. The buttstock has a dusting of white residue in the wrist and just behind, scattered dark discoloration in the wrist and there is some light sanding behind the grip back to the buttplate. There are a few scattered nicks, dings, scuffs and scratches. The checkering is well defined. There are no chips or cracks. The LOP measures 13 1/2” from the front of the trigger to the back of the buttplate. The plate has light wear with some white residue in the checkering near the toe. Drop at comb is approximately 1 1/2″, drop at heel 2 3/8″. The cast is about neutral. Overall, the stocks rate in Good-plus condition.

Finish Originality: The finish is Original to the parts, the “I” and “II” markings on the barrel, lever and latch strongly indicate that this was originally a two-barrel set and the second barrel set is missing.

Bore Condition: Both bores are bright and there is no erosion. There is a line of defined wear inside the left bore near the muzzle.

Overall Condition: This shotgun retains about 50% of its metal finish. The balance is mostly in scattered light-moderate oxidation, erosion, and areas which have been scrubbed bright to remove oxidation and erosion. The finish is thinning at all edges. There are some scattered light nicks, scuffs and scratches. The action shows operational wear. The screw heads range from sharp to tool marked with strong slots. The markings range from clear to obscured by erosion. Overall, this shotgun is in Fair-plus condition (see Mechanics).

Mechanics: The top tang is missing a screw and this may be why the trigger does not function consistently. Sometimes, the trigger can be made to function by alternately engaging and disengaging the safety, operating the barrel selector, and pushing the trigger forward, but most often the trigger does not function. Otherwise, the action functions correctly including ejectors. The lock up is tight with no play. Each side panel has a cocking-indicator, but they are slightly obscured by erosion. We have not fired this shotgun. As with all used firearms, a thorough cleaning may be necessary to meet your standards.

Our Assessment: The Eibar region of Spain has long been a center of arms manufacture in the region. While there has long been a large range in quality, since the 1950s Aguirre y Aranzabal has been recognized as the best of the “Best” in Spanish shotguns, rivaling even the British “Best” gun makers such as Holland & Holland and Westley Richards. This Side-Lock model was a sterling example of their craftsmanship, but appears to have had a rough time more recently. This is a wonderful project gun well worth restoring, but could also serve as a good source of parts for another AYA sidelock of similar vintage. Please see our photos and good luck!