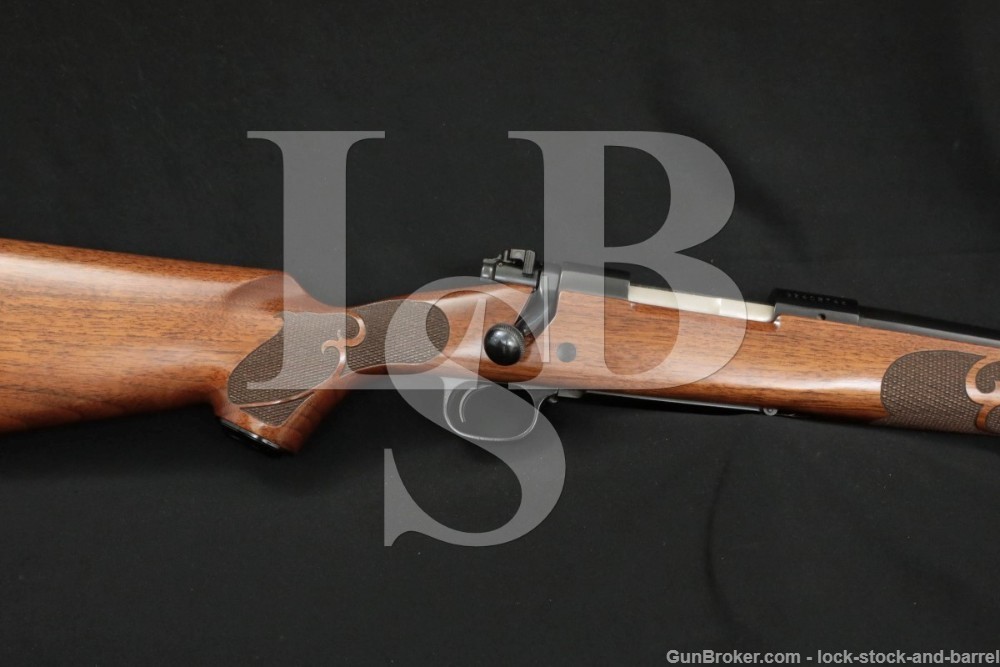 Sights / Optics: There are no iron sights. The top of the receiver has four unfilled drilled and tapped holes for scope bases.

Stock Configuration & Condition: The stocks are a checkered one-piece with capped semi-pistol grip, straight comb, and red rubber Winchester recoil pad.  Fleur-de-lis are engraved on both the grip and the forearm.  There are scattered nicks and scuffs all throughout the stocks. The checkering is sharp.  The recoil pad shows some minor use, specifically around the edge.  There are two separate sling swivel studs on the underside of the belly and the forearm. There are no chips or cracks. The LOP measures 13½” from the front of the trigger to the back of the recoil pad. The stocks rate in about Excellent Overall condition.

Overall Condition: This rifle retains about 98% of its metal finish. The balance of the finish exhibits little operational wear.  There are no major defects for an out of the box hunting rifle. The screw heads are sharp.  The markings are sharp.  Overall, this rifle rates in about Excellent condition.

Mechanics: The action functions correctly.   We have not fired this rifle. As with all used firearms, a thorough cleaning may be necessary to meet your maintenance standards.

Our Assessment: The Winchester Model 70 is a bolt-action sporting rifle. It has an iconic place in American sporting culture and has been held in high regard by shooters since it was introduced in 1936, earning the moniker “The Rifleman’s Rifle”. The action has some design similarities to Mauser designs and it is a development of the earlier Winchester Model 54, itself based on a Mauser 98-type action.

The Model 70 was originally manufactured by the Winchester Repeating Arms Company between 1936 and 1980. From the early 1980s until 2006, Winchester rifles were manufactured by U.S. Repeating Arms under an agreement with Olin Corporation, allowing USRA to use the Winchester name and logo. Model 70s were built in New Haven, Connecticut, from 1936 to 2006, when production ceased. In the fall of 2007, the Belgian company FN Herstal announced that Model 70 production would resume. As of 2012, new Winchester Model 70 rifles were being made by FN Herstal in Columbia, South Carolina. In 2013, assembly was moved to Portugal.”

A sharp-looking and fully-functional rifle in a unique caliber.  Perfect for the range or collection.