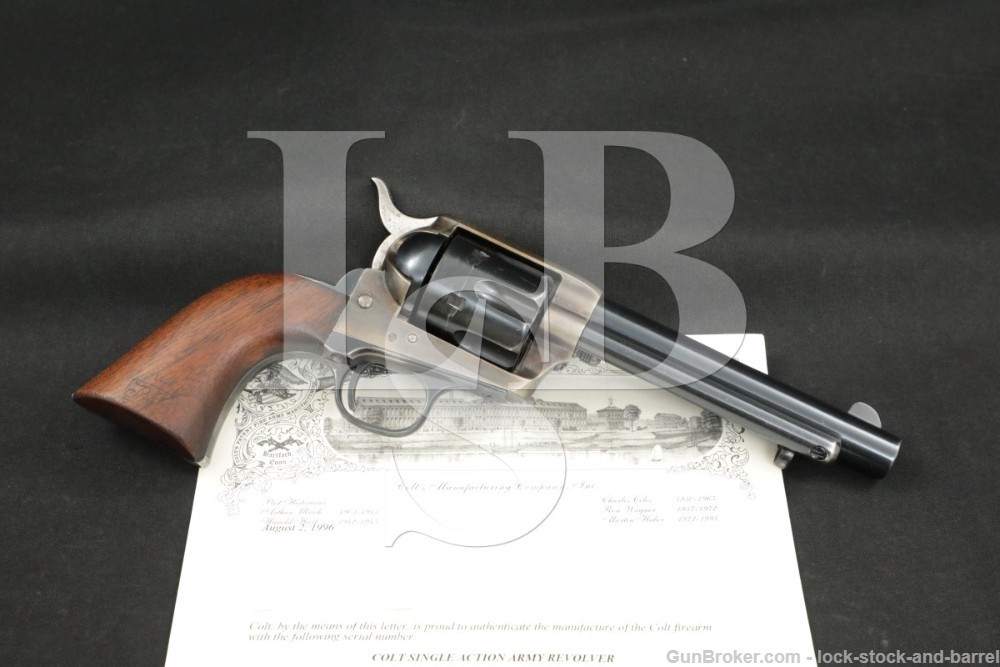 Stock Configuration & Condition: The grip is one-piece smooth walnut. The grip has minor handling wear with a few scattered light nicks and scuffs. There is a tiny loss at the bottom-front corner on the right. There are no cracks. Overall, the grip is in Fine condition as refinished Antique.

Finish Originality: Factory Refurbished. According to the included Colt letter, the revolver was returned to Colt and refurbished, then returned to Springfield Armory by Colt in 1903.

Bore Condition: The bore is mostly-bright with sharp rifling. There is infrequent minor erosion in the bore.

Overall Condition: This revolver retains about 87% of its current metal finish. Most of the balance is in handling wear in the grip areas, trigger and hammer. The finish is thinning at most edges. The frame has some scattered muting, but generally retains good case color. There are some scattered light nicks, scuffs and scratches. The action shows operational wear including a turn-line on the cylinder. There is infrequent minor oxidation, most on the unfinished side faces of the hammer. There is a small patch of erosion under the finish to the right of the trigger guard bow at the front. The screw heads range from sharp to tool marked with strong slots. The markings range from clear to worn, but legible. Overall, this revolver is in about Fine condition as factory refurbished Antique.

Box, Paperwork & Accessories: This revolver comes with a Colt Historian letter showing this revolver frame’s serial number shipped March 21, 1887 to the United States Government. The letter also notes that the revolver was returned to the factory for refurbishing and subsequently returned to the Springfield Armory on May 18, 1903.

Our Assessment: Colt’s Single Action Army is, perhaps more than any other, an iconic American pistol. It was the U.S. issue sidearm for the last two decades of the 19th century, used by pioneers, outlaws and lawmen across the expanding nation, and captivated audiences on the silver screen and television (and still does, today). This is an interesting example of the “Artillery” model, the product of re-working by a U.S. Arsenal in 1898 and again by Colt in 1903. The original arsenal refurbishment included cutting the barrel down to 5 1/2″ from the original 7 1/2″ and was performed in preparation for use in the Spanish-American War. After the war, revolvers were sent back to Colt for a second refurbishment. Since then it appears to have been well cared for, retaining the great majority of its metal finish, a nice bore and strong mechanics. This is a revolver with a rich history, it will make a great addition to even advanced Single Action Army collections. Please see our photos and good luck!