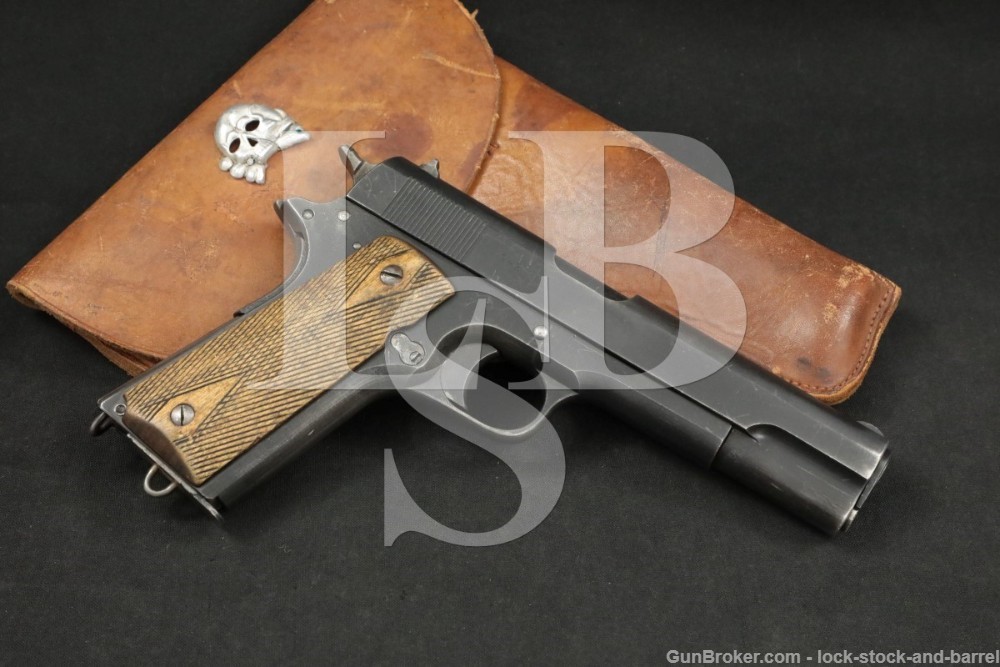 Year of Manufacture: 1942, Under Occupation By Germany

Stock Configuration & Condition: The grips are checkered hardwood with smooth diamond shapes around the grip screws. The grips appear to have been painted black originally, and the paint has mostly worn off except for in the grooves of the checkering and on the inside faces. The grips show moderate handling wear with some scattered light nicks, scuffs and scratches. The checkering is visible, but is generally smoothed, with the most notable wear on the right panel. There are no chips or cracks. Overall, the grips are in Good-plus condition.

Bore Condition: The bore is light gray. The rifling is sharp where not interrupted by erosion. There is scattered light erosion in the bore.

Overall Condition: This handgun retains about 75% of its metal finish. The finish is thinning at all edges. The grip areas show handling wear. There is some scattered light wear on the slide, most notable on the top-left. There are scattered light nicks, scuffs and scratches. There is a patch of more notable wear on the left of the frame around the slide stop. The action shows operational wear. The screw heads are tool marked with strong slots. The markings are generally clear. As noted, the slide and frame serial markings have the last digit stamped over a “7”. Overall, this pistol is in Very Good condition.

Mechanics: The action functions correctly. The slide has light play to the frame. The trigger pull is a little stiff but crisp. We did not fire this handgun. As with all used firearms, a thorough cleaning may be necessary to meet your maintenance standards.

Box, Paperwork & Accessories: This pistol comes with a brown leather flap-holster and a single 7 round magazine. The holster has a metal totenkopf attached to the flap. The holster shows scattered light wear and discoloration, verdigris at the brass stud, and intact stitching, in about Good-plus condition as not original to the gun. The magazine appears as though it may have been blued around some edges, some surfaces appear as though they may have been plated, but most surfaces are worn to white. The magazine shows operational wear with intact feed lips and a strong spring, in about Good condition.

Our Assessment: In the early 1900’s, the Norwegians were looking around for a pistol to replace their aging Nagant revolvers. They held several commissions to evaluate pistols, but they all came back recommending Colts – at first the Model 1902 in .38 ACP and finally the Model 1911. The Norwegian parliament kept refusing funding for the pistol, holding out for a “homegrown’ design. They finally gave up in 1914 and allowed the 1911 to be adopted. Norway held discussions for Fabrique Nationale, Browning’s representative in Europe, to secure a license to produce the pistols in Norway. Production finally began in 1917 with a few hundred produced. In 1918, a few slight changes were made, which resulted in a slide release that was both extended and lowered, which makes one wonder “Why didn’t we think of that?”. The Germans occupied the Kongsberg factory in 1940 and remained there until 1945. During their occupation, production of pistols ceased in 1943 and 1944, with priorities given to rifles. Under occupation, the pistols made in 1940-1942 were inspected by a civilian inspector, Jorgen Bjornholt, who was forced into service after all of the regular inspectors at the factory refused to serve the Germans. His “JB” inspection mark and an “N” which is believed to be the mark of Oberfuhrer Neumann, the German supervisor at the facility, were marked on these earlier occupation guns and only the few hundred guns made in 1945 were marked with German waffenamts. To add further value to these guns, the Kongsberg Colt and the Argentine Model of 1927 are the only two legitimate licensed copies of the Browning designed Colt 1911 produced overseas. This pistol was made in 1942 and is in Very Good condition with about 75% of its original finish remaining. It has matching serial numbers on the external parts, though the slide and frame’s serial markings curiously have the last digit double-stamped, with an “8” over a “7”. Quisling and his ilk aside, the Norwegians were generally none too pleased with the occupation, and it is possible that this is a factory error, indicative of a lack of motivation on the part of the Norwegians to produce arms for use by their occupiers. This, or perhaps simply a demand for increased production by the Germans, may also explain why some pistols in the occupation serial range are reported to not have serial markings on their recoil spring plug or barrel bushing, as was common with earlier Norwegian production. The checkered wood grips resemble Colt grips with smooth diamonds around the grip screws, but were made with a lighter-colored hardwood and painted black. This is a very nice find for collectors of European firearms as used during WWII, for those of Scandinavia in particular, but are also a great addition to a 1911 collection. There were only about 30,000 of these pistols made in total, and only about 8,200 during WWII, making them quite scarce today. Please see our photos and good luck!