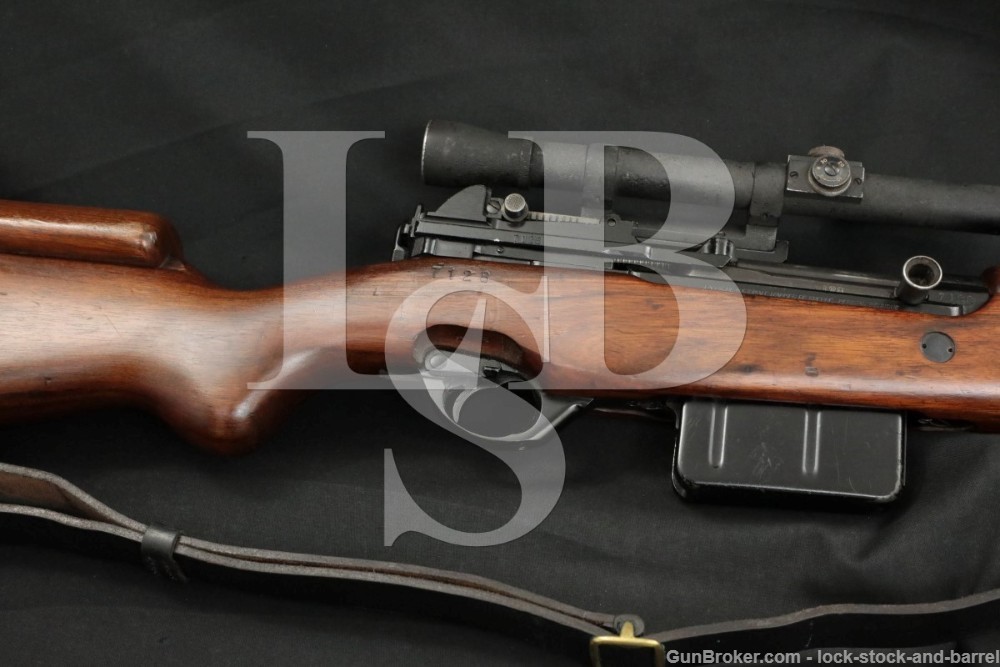 Sights / Optics: The front sight is a bladed post set between two protective ears. The rear sight is an aperture tangent sight marked from “1-10”.
The left side of the receiver has a permanently attached raised scope mount. It holds the upper mount & scope. The upper scope mount is a commercial variation of the Military contract mount. The scope is a fixed 2.5 power M82 U.S. Sniper Scope. It uses a tapered post reticle. The glass appears clear and the adjustment knobs turn. The scope & upper mount have been refinished. They show scrapes & scratches and are in about Very Good Plus condition.

Stock Configuration & Condition: The two piece hardwood stock has a pistol grip, raised cheek piece, finger grooves, metal nosecaps, barrel band, 2 sling loops and a metal buttplate with hinged door for storage in the butt. The buttplate shows scrapes and thinning. The wood shows scrapes, light scratches and compression marks. Most of these marks have been oiled over. The LOP measures 13 ¼ inches from the front of the trigger to the back of the buttplate. The stock rates in about Very Good Plus to Fine overall condition as refinished.

Bore Condition: The lands are bright. The grooves are semi bright, and the rifling is deep. There is a small amount of frosting in the grooves near the muzzle. The bore shows an M.E. of -2 (negative 2).

Overall Condition: This rifle retains about 94% of its metal finish. The metal shows scrapes & scratches. Some have damaged or removed areas of the paint finish. The most prominent marks are on the barrel. The bolt shows light thinning consistent with cycling. The screw heads show moderate use. The markings are deep. Overall, this rifle rates in about Very Good Plus to Fine condition.

Our Assessment: This is Rare Luxembourg FN 49 Sniper is in nice shape. Luxembourg FN 49’s are chambered in .30-06 and marked distinctly on the top of the receiver with a large “AL”. This Sniper also has a permanently attached raised scope mount and a raised cheek piece. The rifle comes with a commercial variation of the upper scope mount and a U.S. M82 Sniper Scope. This FN 49 will add nicely to a Military collection.