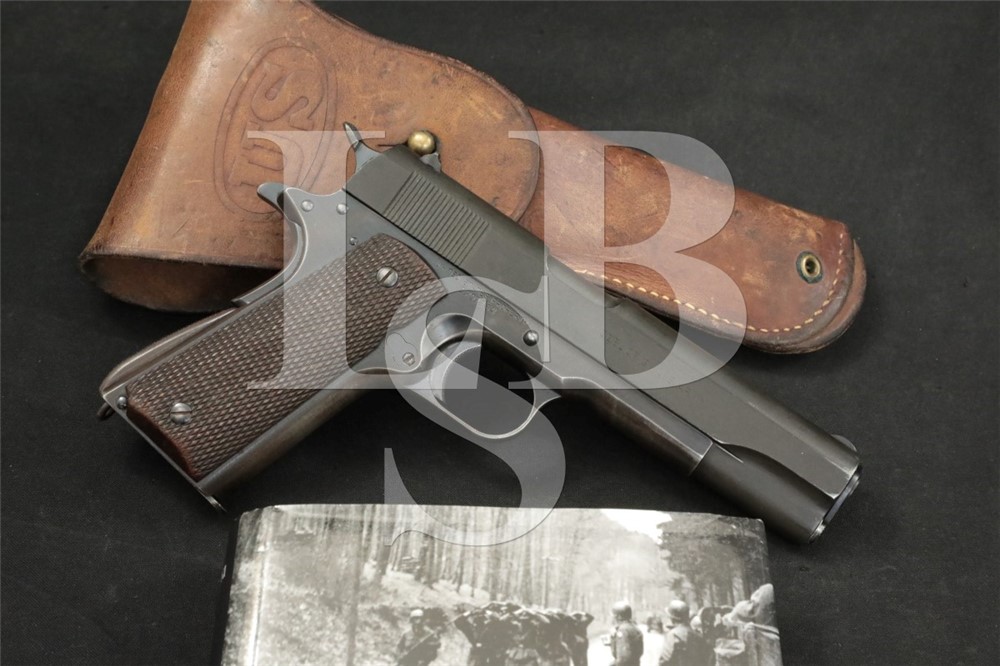 Sights / Optics: The front sight is a short rounded blade with flat, not tapered sides. The rear sight is a “U” notch dovetailed into the slide.

Stock Configuration & Condition: The grips are two-piece fully checkered walnut panels. The grips have light handling wear with a few light nicks, scuffs and scratches. The checkering is well defined. There are no chips or cracks. Overall, the grips are in Very Good-plus condition.

Finish Originality: The frame’s finish is Original, the slide has been refinished. The barrel is not original to the gun.

Overall Condition: This pistol retains about 75% of its metal finish. The finish is thinning at all edges. The slide’s finish is generally strong with some scattered minor nicks, scuffs and scratches. The frame has handling wear in the grip areas and finish wear on the bottom of the dust cover, with generally strong blue finish on the flats. The frame has scattered minor surface oxidation with a few light nicks and scratches, including an “idiot mark” under the slide stop. The action shows operational wear. The screw heads range from sharp to lightly tool marked with strong slots. The markings are clear. Overall, this pistol rates in Very Good condition as partially refinished.

Mechanics: The trigger pull is crisp and the slide is tight on the frame. The action functions correctly. We have not fired this pistol. As with all used firearms, a thorough cleaning may be necessary to meet your maintenance standards.

Box, Paperwork & Accessories: This pistol comes with one 7-round magazine. The magazine has light operational wear and infrequent minor erosion, intact feed lips and a strong spring, in Very Good condition. Also included is a brown leather flap-holster marked “US” in oval on the flap and “BOYT / -42-” on the belt-loop. The holster shows scattered wear and discoloration, verdigris at the metal components, a missing rivet on the belt-loop, and intact stitching in Good-plus condition. This pistol will ship with a copy of “In Final Defense of the Reich” by Stephen Rusiecki. The book includes information regarding its owner, Col. Carl Elliot Lundquist. Also included are photos of Col. Lundquist, partial resume, images of command patches, images of medals received, and a signed letter from family member Cynthia Lundquist.

Our Assessment: This firearm comes from the personal collection of Col. Carl Elliot Lundquist, whose distinguished military career spanned 30 years, starting with his 1927 graduation from West Point to his retirement as Colonel in 1957. In 1945, he commanded forces that would see to the ultimate destruction of the 6th SS Mountain Division—”Nord”—in the final months of World War II. He passed away in 1980. The 1911 and 1911-A1 pistols served the military of the United States from 1911 to 1985, through two World Wars and the Korean and Vietnam wars. They gained a reputation as a reliable handgun with plenty of stopping power, and are held in high regard by those who have used them. This is a Colt Model 1911 “Transitional Model” made in 1924. It is slightly different than the 1911 pistols made during WWII and incorporates many of the changes Colt put into their commercial pistols as well as changes suggested by the government, almost all of which are found on the 1911A1 models, but the slide is still marked “1911” (These pistols were retroactively given the 1911A1 designation in 1926) and has a rounded front sight blade, rather than the later serrated, ramped blade. There were 10,000 made, in serial number sequence between 700001 and 710000, with a thousand at the end of the sequence designated National Match pistols. The transition models retained their rounded front sight, but the sides are straight, not tapered, for better visibility, and the “U” notch rear sight was made slightly larger. The recoil spring and mainspring were made slightly weaker to make it easier to rack the slide and the grips were changed to eliminate the smooth diamonds around the grip screw. The pistol is in about Very Good condition with 75% of its current finish remaining. The slide has light wear in its new parkerized finish while the frame retains much of its original blue finish. The bore on its post-war barrel is bright with sharp rifling. The checkered walnut grips show light wear. This pistol, as well as its connection to Col. Lundquist make it a great find for collectors of WWI and WWII 1911 and 1911A1 pistols, as the transition models are quite rare compared with the standard 1911 or 1911A1 models. Please see our photos and good luck!