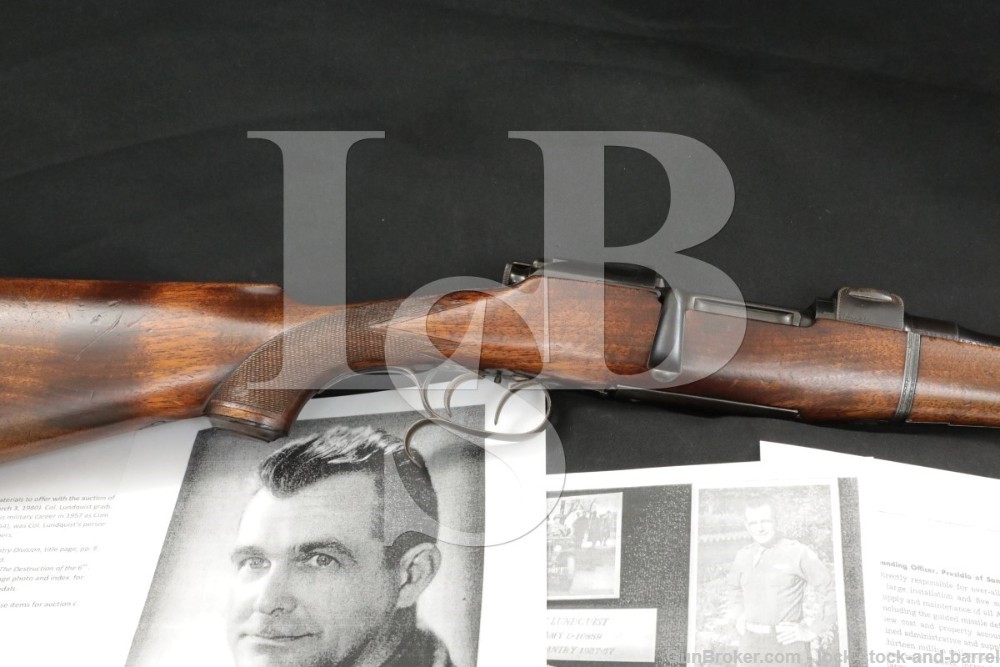 Sights / Optics: The front sight is a beaded blade dovetailed to a textured ramped base fixed to the front of the barrel. The base is grooved for a hood which is not present. The rear sight is a fixed “U”-notch with a taller folding “U”-notch marked “300” dovetailed to a banded base at the rear of the barrel. There is provision for mounting some kind of scope a two-slot base dovetailed on the chamber ring and a single-slot base screwed in the left of the split-bridge. We do not know what scope rings/mount are appropriate for this mounting system.

Stock Configuration & Condition: The stock is three-piece checkered walnut. The forend is two pieces, split at the front edge of the checkering. Each portion is held in place with a wedge and the forward portion is also held to a barrel band by the front sling swivel. The takedown lever is in the bottom-rear of the forend, allowing the barrel to be threaded out of the receiver (when the bolt is not forward). The buttstock has a capped pistol grip with a straight comb, European-style cheekpiece, basketweave-textured brown rubber Pachmayr buttpad and a sling swivel in the belly. The forward portion of the forend is missing a nosecap and has provision for a cleaning rod, but none is present. The heel has an inlet for the original buttplate, left empty by the current pad/spacer. The stocks have some scattered nicks, scuffs, scratches and general handling wear. There are some small losses around the takedown lever assembly and magazine assembly with one more notable loss at the right-rear of the magazine assembly. The checkering is well defined. There are no cracks. The LOP measures 14 1/8″ and 13 1/8″ from the fronts of the triggers to the back of the buttpad, 13 1/2″ and 12 1/2″ to the back of the wood. The pad has some light wear at the heel. Overall, the stock is in Very Good condition.

Finish Originality: Most finish is Original, the trigger guard has had a finger extension welded on and was then refinished.

Overall Condition: This rifle retains about 85% of its metal finish. The finish is thinning at most  edges. There is some scattered minor finish wear. There is light handling wear in the bottom metal and bolt handle. There is infrequent minor surface oxidation. There are a few light nicks and scuffs. The front optic base has light tool marks on each side. The action shows light operational wear. The screw heads range from tool marked with strong slots to disfigured with questionably usable slots. The markings are clear. Overall, this rifle is in Very Good condition.

Mechanics: The action functions correctly. The trigger is light and crisp when set. There is a Mauser style safety on the back of the bolt which blocks the trigger and locks the bolt. The rifle has a rotary magazine with a push-button release on the right side of the receiver at the port. There is a bolt release on the left rear of the receiver. The takedown lever is on the bottom-rear of the forend, pulling down allows the barrel to be threaded out of the receiver (the bolt must be open). We did not fire this rifle. As with all used firearms, a thorough cleaning may be necessary to meet your maintenance requirements.

Our Assessment: This firearm comes from the personal collection of Col. Carl Elliot Lundquist, whose distinguished military career spanned 30 years, starting with his 1927 graduation from West Point to his retirement as Colonel in 1957. In 1945, he commanded forces that would see to the ultimate destruction of the 6th SS Mountain Division—”Nord”—in the final months of World War II. He passed away in 1980. The Mannlicher-Schoenauer rifle dates to 1903 when the 6.5x54mm cartridge and both military and civilian rifles to shoot it were introduced. Austria and Greece adopted the 1903 military rifle and the 6.5×54 cartridge that same year. The 1903 Mannlicher rifles and carbines were the last designs of Ferdinand Ritter Von Mannlicher, who died the next year, and his friend Otto Schönauer who designed the exceptional rotary drum magazine intrinsic to all Mannlicher-Schoenauer rifles. Mannlicher-Schoenauer rifles and carbines were exclusively manufactured at Oesterreichische Waffenfabrik Gesellschaft Steyr in Steyr, Austria. This Mannlicher-Schoenauer is quite interesting as it is a takedown design and is also chambered for the 7mm Mauser cartridge rather than one of the proprietary M-S cartridges. This is a very nice-looking rifle built with typical German-Austrian craftsmanship during the inter-war years. This rifle would be a nice addition to any collection of fine European sporting rifles. Please see our photos and good luck!