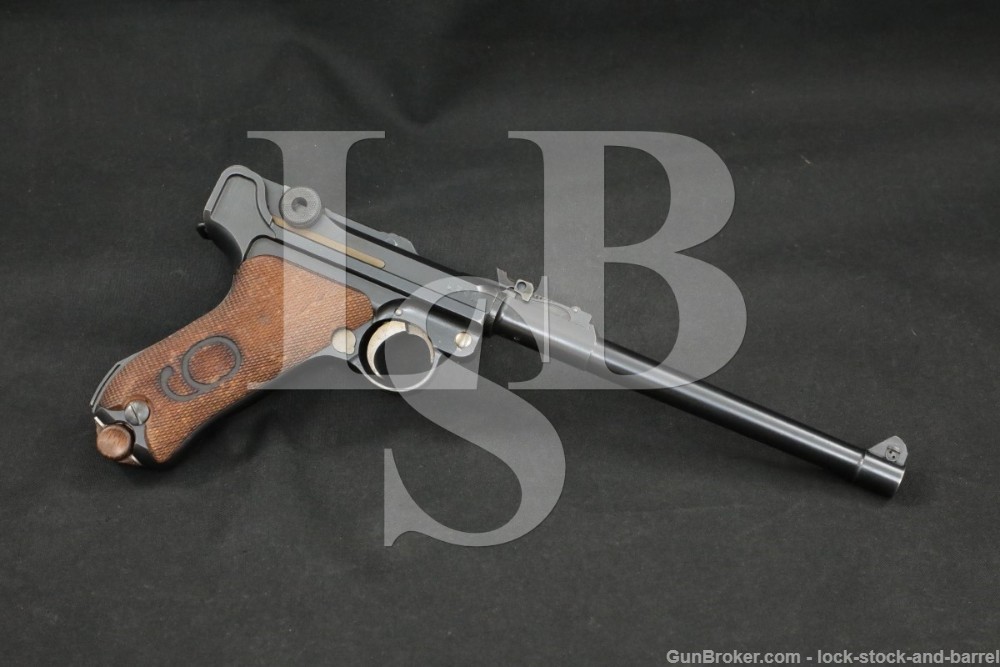 Sights / Optics: The front sight is a serrated blade dovetailed to a serrated, ramped base fixed to the muzzle. The front sight is fine-adjustable for windage via a spanner-wrench screw on the right of the base. The tangent artillery rear sight is flat topped with a “V” notch and the elevator has graduated markings from 1-8. The elevation can be fine-tuned via a spanner wrench screw adjustment. The sights are known as the “Fine Tuning” Artillery Sights.

Stock Configuration & Condition: The grips are two-piece checkered walnut. Each grip has a large “9” branded into the checkering toward the bottom. The grips have a few scattered light nicks and scuffs with a more notable scratch on the right panel near the top. The checkering is generally well defined. There are no chips or cracks. Overall, the grips are in Very Good-plus condition.

Bore Condition: The bore is mostly bright with sharp rifling. There is infrequent minor erosion in the bore, mostly at the muzzle-end.

Overall Condition: This pistol retains about 96% of its finish. The finish is generally strong throughout. There are a few scattered minor nicks and handling marks. The action shows minor operational wear. There are infrequent spots of minor surface oxidation. The screw heads are sharp. The markings are clear. Overall, this pistol is in about Fine-plus condition.

Box, Paperwork & Accessories: This pistol comes with a single tin plated magazine with a wooden floorplate. The magazine has light operational wear, scattered minor discoloration from oxidation, intact feed lips and a strong spring, in about Very Good condition.

Our Assessment: This is a Long P.08 Luger, also known by collectors as the “Artillery Luger”. The model was originally issued to field artillery, airmen and fortifications. The model had a longer, 8″ barrel and was equipped with more precise sights than the standard P.08. Later, it was designated for use by Sturmtruppen and other assault forces trying to breach the trench lines. It was the first Luger to use the 32 shot snail magazine. With its “Fine Tuning” front and rear sights, this pistol is probably second to none in long range accuracy among the Great War issued sidearms. This pistol has its original finish and the remaining serial numbers are all matching, though the grips have been replaced. Interestingly, the grips have large 9s marked on them, reminiscent of the Mauser C96 “Red Nine” pistols. The Red Nines were issued around the same time as the Long P.08 model pistols and it appears that some armorers mis-understood the directive to mark the new Mauser pistols’ grips with a “9” to denote their caliber. These armorers proceeded to mark all of the new incoming pistols with “9”s, Mauser or not. The grips are not serialized and the “9” markings are quite clean and crisp, possibly indicating that they are not original. That said, the whole pistol is quite clean and crisp, so the grips’ condition matches the rest of the gun. The artillery models are always collectable: they are a very interesting looking weapon that almost everyone wants to own. This is a really nice example, sure to end up in a collection of Lugers alongside its P04 and P08 cousins. Please see our photos and good luck!