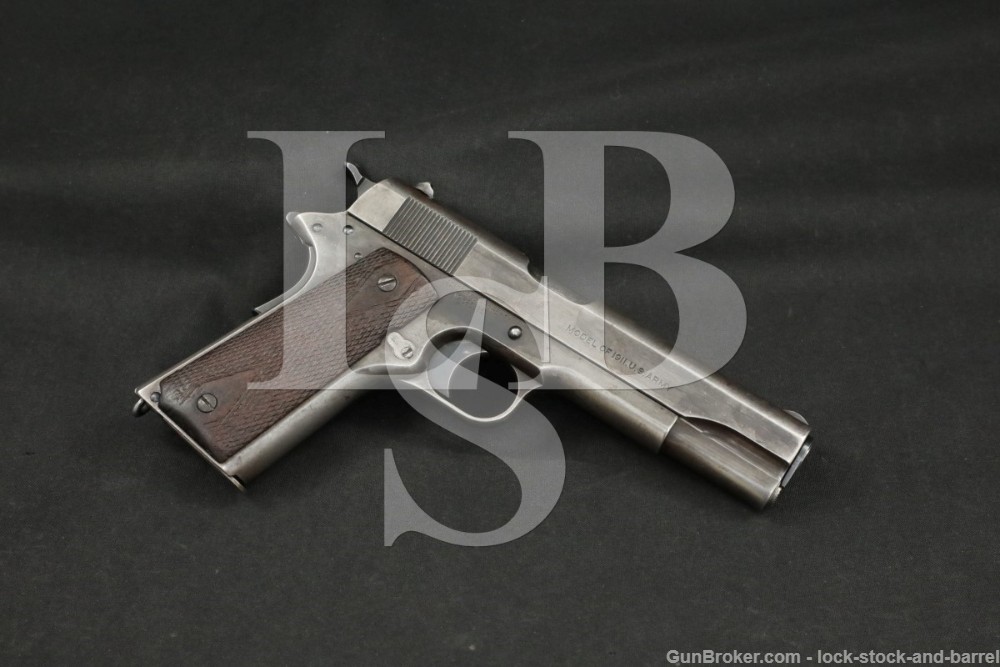 Stock Configuration & Condition: The grips are two-piece checkered walnut with smooth diamonds around the grip screws. The grips show moderate handling wear with some smoothed checkers at the bottom edges. There are some scattered nicks, scuffs and scratches with tool marks around the screw heads. The checkering shows wear, but is fairly well defined. There are no chips or cracks. Overall, the grips are in about Very Good condition as not original to the gun.

Finish Originality: Most parts have Original finish, the thumb-safety has been refinished.

Bore Condition: The bore is gray and the rifling is sharp where not interrupted by erosion. There is scattered light erosion and infrequent minor pitting in the bore.

Overall Condition: This pistol retains about 30% of its metal finish. Strongest finish is on the sides of the frame around the trigger and under the grips, on the left of the slide in front of the serrations, and in the controls. Other areas show infrequent remaining finish, mottled with areas worn to white and some gone to a light patina. There are some scattered light nicks, scuffs and scratches. The thumb safety has some scraping. The action shows operational wear. The screw heads range from sharp to disfigured with useable slots. The markings are generally clear, the rampant colt and eagle’s head inspection mark are poorly struck. Overall, this pistol is in about Good condition.

Box, Paperwork & Accessories: This pistol comes with a single 7-round magazine, blued in the bottom portion and in the white toward the top. The floorplate has a lanyard loop and the body comes down flush with the bottom of the plate. The magazine shows scattered wear and minor surface oxidation, with intact feed lips and a strong spring, in about Very Good condition.

Our Assessment: The 1911 and 1911-A1 pistols served the military of the United States from 1911 to 1985, through two World Wars and the Korean and Vietnam wars. They gained a reputation as a reliable handgun with plenty of stopping power, and are held in high regard by those who have used them. This is a U. S. Government marked Colt 1911 pistol made toward the end of WWI in 1918. The pistol is in about Good condition, retaining about 30% of its late war bluing, sometimes referred to as a “black army” finish. The pistol shows wear which could be considered light for a military sidearm that’s more than 100 years old and appears to have seen use in the field. This should make a nice addition for the 1911 collector and should still make for a good shooter. Please see our photos and good luck!