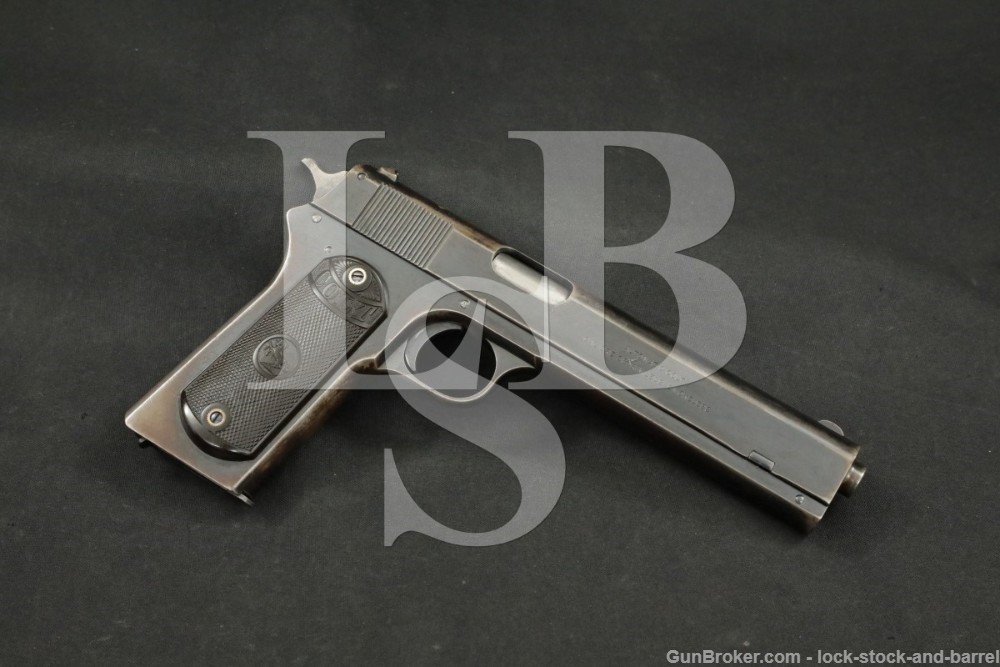 Stock Configuration & Condition: The grips are checkered black hard rubber with “COLT” in a banner across the tops of the grips and a circled Rampant Colt logo in the center of the grips. The grips show light handling wear with some scattered minor nicks and scuffs. The checkering and lettering are well defined with good detail on the rampant colts. There are no chips or cracks. Overall, the grips are in about Fine condition.

Bore Condition: The bore is semi-bright. The rifling is sharp. There is some scattered minor erosion in the bore.

Overall Condition: This handgun retains about 80% of its metal finish. The finish is thinning at all edges. Most of the balance is in handling wear in the grip areas. There is some other scattered minor finish wear. There are scattered light nicks, scuffs and scratches with a few more notable dings on the slide flats. Most worn areas show discoloration from oxidation. There are light tool marks on and around most pin-heads as well as the slide wedge. The screw heads are sharp. The markings are clear. Overall, this pistol is in about Very Good condition.

Box, Paperwork & Accessories: One 8 round blued magazine is included, the top portion is in the white and the floorplate is marked “MIL. / COLT / 38 CAL.”. The magazine has light operational wear, minor surface oxidation, intact feed lips and a strong spring, in about Very Good condition.

Our Assessment: The 1902 is one of the most beautiful handguns ever made and an important link along the evolution line of the 1911. The wear on this pistol is honest and could even be considered light for a pistol that’s been around for more than a century. This pistol was made in 1920 after WWI, and toward the end of the 1902’s production. While sales continued through 1928, most after 1920 appear to have been sold out of existing inventory with production itself ending earlier. This is a nice example of the 1902 military, a wonderful find for the Colt pistol collectors. Please see our photos and good luck!