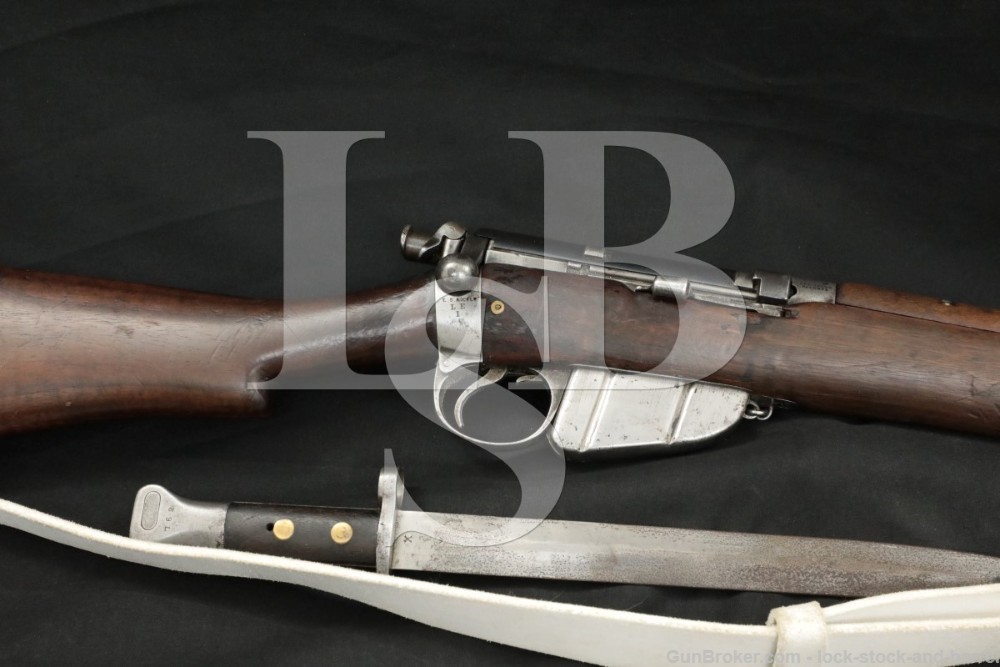 Model: Lee-Enfield MkI. This rifle was originally produced as a Lee-Metford MkII. It was later Arsenal Converted to use Enfield Rifling and remarked.

Markings: The top rear of the receiver is marked with the serial number. The front of the receiver is with a “crown / V” and “LEE-SPEED / PATENTS”.  The right side of the stock collar is marked 1892 / L.S.A. Co. LTD / L. E. / I”. The rear of the bolt handle is marked with a number that does not match the serial number. The rear of the bolt handle and rear of the cocking piece are marked with inspection stamps that include “crowns”. The right side of the butt is marked “”M & D” and with a faded stock roundel. There are a few other small stampings on the rifle.
The base of the bayonet blade is marked with several inspection stamps and with a faded production date “crown / 1 92”. It is also marked “00” which appears to be a reissue date. The pommel is marked “762”.

Sights / Optics: The front sight is a small Inverted “V” post set atop a ramped base. The rear sight is a “V” notched blade assembly attached to a sliding escalator. The left side of the rear sight base is marked “200 300 400 500” for use with the escalator. It flips up to become a sight ladder. The ladder uses a separate sliding “V” notched blade and is marked from “6-17”. The front volley sight is a rotating dial with a point at one end and the front volley sight at the other. The sight is rotated to the desired distance. It is marked “1600” and from “17 – 28”. The rear volley sight is a tall flip up aperture attached to the safety.

Stock Configuration & Condition: The wood stock has a straight grip with finger groove, barrel band, nosecap with bayonet lug, hole for the included cleaning rod, scallop for the front volley sight, stacking loop, 2 sling loops and a brass buttplate with hinged door for storage. We found cleaning gear in the butt. The buttplate shows light oxidation as well as several small scratches & small dents. The stock hardware shows areas of surface erosion. The wood shows numerous scrapes, scratches & compression marks. Several have damaged small portions of the surface wood. These marks have been oiled over. The rear of the handguard shows a hairline edge cracks at the front & rear. The rear hairline crack flexes slightly when pressure is applied. The LOP measures 13 ½ inches  from the front of the trigger to the back of the recoil pad. Overall the stock is in about Very Good condition as an antique.

Bore Condition: The muzzle is grey, the grooves are dark and the rifling is deep. There is erosion present; more prominent in the grooves.

Overall Condition: This rifle has lost its metal finish to oxidation & cleaning. The metal shows scrapes, small scratches and several areas of light surface erosion. The screw heads show heavy use. The main markings are deep. Overall, this rifle rates in about Good condition as an antique.

Mechanics: The action functions correctly. We have not fired this rifle. As with all used firearms, a thorough cleaning may be necessary to meet your maintenance standards.
The bayonet mounts to the rifle properly.

Box, Paperwork & Accessories: The rifle comes with a Pattern 1888 Mk. I bayonet which is correct for this rifle. It shows scrapes, small scratches and surface erosion. Overall it is in about Fair to Good condition as an antique.
The rifle has a sling and magazine attached. The unmarked white leather sling is the correct style for this rifle. It shows scrapes, light discoloration and some areas of surface loss. Overall it is in about Very Good Plus to Fine condition. The 10 round magazine is attached to the rifle by a small metal link. It shows thinning, scrapes, small scratches and areas of light surface erosion. The magazine is in about Good condition. A pull through twine thong with weighted end is stored in the butt. It is about Very Good Plus condition.

Our Assessment: This Lee-Enfiled MkI was made by the London Small Arms Company Ltd (LSA Co) of England back in 1892. This rifle was originally produced as a Lee-Metford MkII. It was later Arsenal Converted to use Enfield Rifling and remarked. Our consignor advises that it was part of a contract to re-arm the Afghanistan Royal Army. This 129 year old rifle is a piece of British Military history and will add nicely to your Military collection.