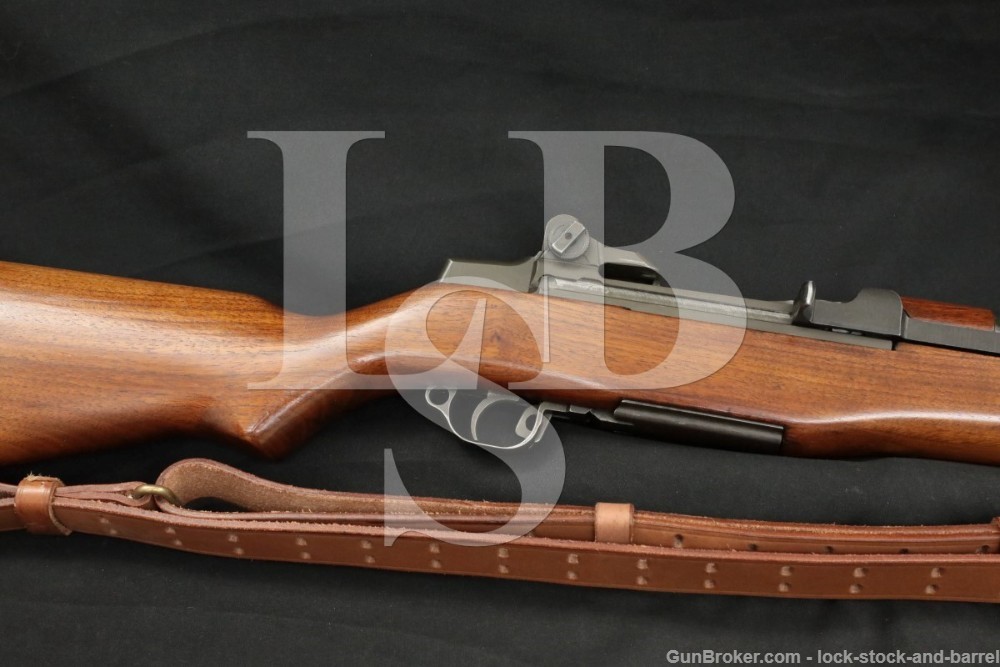 Markings: There are no import marks.

Stock Configuration & Condition: The hardwood stock has a pistol grip, metal nose caps, a stacking loop, two sling loops, and a metal buttplate with hinged door for storage in the butt (there is cleaning equipment in the storage). There is an incomplete circled “P” mark in the face of the grip. The buttplate is slightly worn and has well defined checkering. The stock shows some scattered nicks, dings, and scratches, some of which have damaged small portions of the surface wood. There are no chips or cracks. The LOP measures 13 inches from the front of the trigger to the back of the buttplate. The stock rates in about Very Good overall condition as refinished.

Bore Condition: The bore is mostly bright and the rifling is sharp. There a few scattered spots of erosion, mostly toward the muzzle-end. The bore shows an M.E. of 1.5. The throat shows a T.E. of 3.5.

Overall Condition: This rifle retains about 87% of its metal finish. The finish is thinning at all edges. There are some scattered light nicks and scuffs. There is some finish wear on the trigger and floor plate.  The action shows operational wear. The markings are clear. Overall, this rifle rates in about Very Good-Plus condition.

Box, Paperwork & Accessories: Included with the rifle is a military style leather sling and cleaning equipment in the buttplate (oiler, lube, cleaning rods, patches and combo tool). The leather sling has minor handling wear and slight discoloration on the brass hooks, in about Fine condition.

Our Assessment: This WWII Springfield Armory M1 Garand was made back in 1942. As was the case in the previous Great War, the outset of WWII found many nations starved for small arms, procuring just about anything they could get their hands on to arm their troops. Prior to the United State’s entry to WWII, there were various methods of supplying the Allies with defense products while maintaining neutrality, the final being the Lend-Lease Act which permitted the sale, lending and leasing of defense equipment to Allied nations by the U.S. government. This Garand’s British proof markings indicate that it is one that was sold to the British government under the Lend-Lease Act. A total of 38,001 M1 rifles were sold to the British before deliveries were cancelled in June, 1942, making this one of the last rifles which would have been sent. These Lend-Lease Garands were some of the first available to American collectors, as the M1 was still in service when the British rifles started coming back across the pond for commercial sales. This example is still in nice shape, and will make a nice addition to a military rifle collection or a fun shooter.