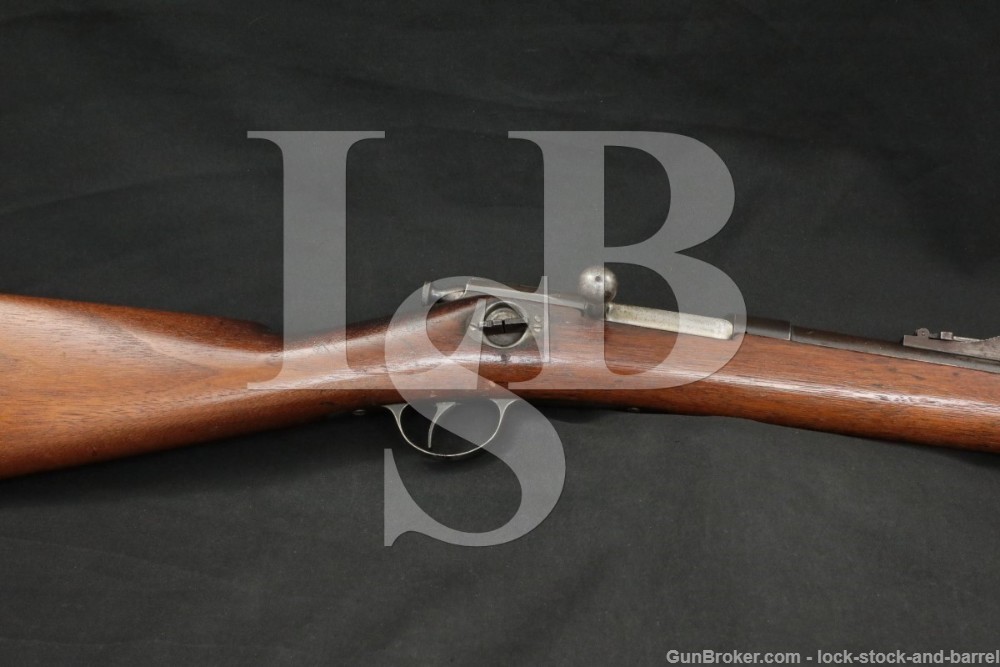 Sights / Optics: This rifle is mounted with a fixed post front sight and a flip up ladder rear sight adjustable to 1,000 yards.

Stock Configuration & Condition: The stocks are smooth walnut with a straight wrist, barrel band and carbine style steel butt plate. The stock has likely had a very old and very light coat of finish applied, but no sanding. The wood to metal fit is great, the piece is darkening appropriately, and we think the newer finish is barely notable. There are no cracks, but a tiny loss at the toe. Other scratches, scuffs and marks are present, though for their age, the stock is far better than average. The LOP measures approx. 13 ½” to the steel buttplate which has lost its finish and begun to erode. The stocks rate in about Very Good – Fine overall condition.

Bore Condition: The bore is dull, and the rifling is still sharp and deep. There is minor erosion present, but this is far better than expected with no pitting and probably rates a solid 6 out of 10.

Overall Condition: This rifle retains about 20% of its metal finish, only in protected areas. The balance of the finish shows mostly brown patina and gray metal. The patina is dark and thick, more so on the barrel than the frame. The frame is a little lighter and has some finish loss along the edges of the wood from an aggressive cleaning. The Screw heads are lightly marred but still attractive. The markings are clear. Overall, this rifle rates in about Very Good condition and has an untouched “Antique” appearance.

Mechanics: The action functions correctly. The bolt cocks the firing pin and the trigger releases it. We did not fire this rifle.

Our Assessment: “The Winchester Hotchkiss was a bolt-action repeating rifle patented by Benjamin B. Hotchkiss in 1876 and produced by the Winchester Repeating Arms Company and Springfield Arsenal from 1878. The Hotchkiss like most early bolt-actions had a single rear locking lug integral with the bolt handle, but was unique in feeding multiple rounds from a tubular buttstock magazine similar to the Spencer rifle.

The .45-70 Hotchkiss was acquired in limited numbers by the US Navy as the M1879, and (in a slightly modified version) by the US Army and several state militias as the M1883, making it the first bolt-action repeater to be adopted by any major military. The Chinese Empire purchased 15,000 Winchester-Hotchkiss rifles in 1881. However, the result of the US Army’s 1883 field trials was the rejection of the Hotchkiss and Remington-Lee bolt-actions for general issue, and the retention of the single-shot “trapdoor” Springfield Model 1873 as its primary longarm for another decade.

Winchester also produced a civilian sporting version of the Hotchkiss, likewise in caliber .45-70 Government, until 1899.”

This is a solid example of a seldom seen gun. It is a commercial carbine that remains attractive, untouched (but for some light cleaning) and belongs in a good Winchester collection.