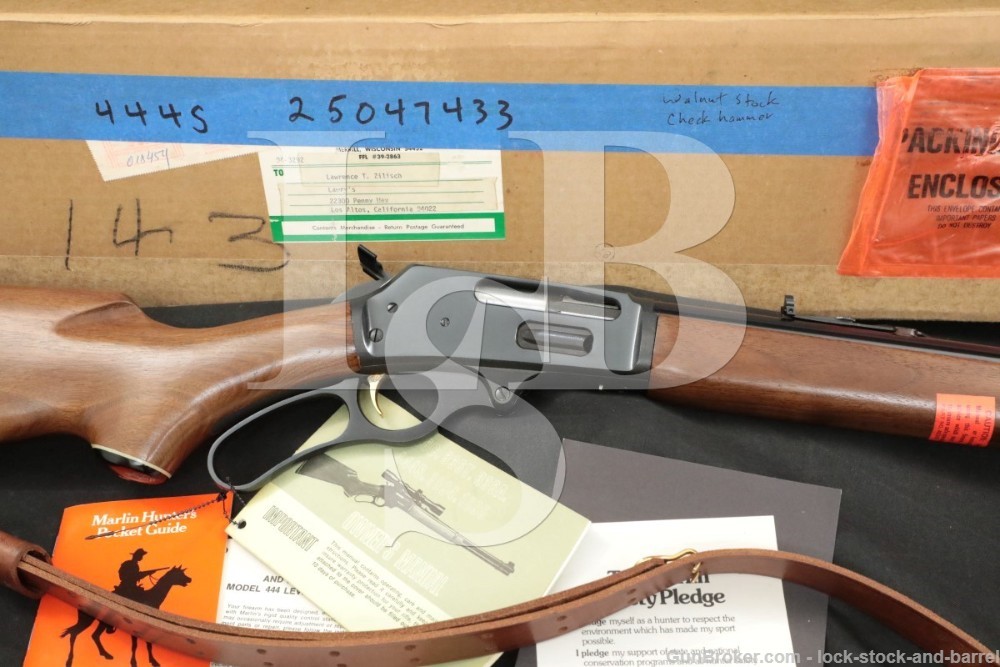 Sights / Optics: This rifle is mounted with a “U” notch folding rear sight which can be adjusted for elevation which is dovetailed to the rear of the barrel. The front sight is a hooded beaded blade on a serrated ramped riser which is screwed to the barrel. The top of the receiver is drilled, tapped, and filled in four places for mounting an optic (none included).

Stock Configuration & Condition: The stocks are two-piece smooth walnut with a capped pistol grip, fluted straight comb, and a brown ventilated rubber White Line Pachmayr recoil pad. There is one barrel band that secures the forend, the band has a sling swivel and there is another in the belly and attached is a brown leather sling. The sling shows some light rubs with thick verdigris on the bases of the securing loops, rating in about Fine condition overall. There is a Marlin bullseye in the belly as well. On the bottom of the forearm, there is a factory Caution sticker and another sticker marked “SOLID AMERICAN / (walnut tree) / WALNUT”. The only noticeable imperfection is a couple of light marks on the right side of the buttstock. There are no chips or cracks. The LOP measures 13 3/4” from the front of the trigger to the back of the recoil pad. The recoil pad shows light wear and has remained pliable. The stocks rate in about Fine-Plus overall condition.

Bore Condition: The bore is bright and the Micro-Groove rifling is well defined. There are scattered tiny pinpricks of erosion in some of the grooves.

Overall Condition: This rifle retains about 96% of its metal finish. There is some oxidation on the male dovetail of the rear sight. There is a row of consecutive tiny spots of finish loss on the right shoulder of the barrel. There are other infrequently scattered marks throughout the metal. There is some finish loss and oxidation on the right side of the barrel. The screw heads are sharp and the pinheads are unmarred. The markings are crisp. Overall, this rifle rates in about Fine-Plus overall condition.

Mechanics: The action functions correctly. The lever locks up well and the hammer has a half-cock safety position in addition to a lever safety. We did not fire this rifle. As with all used firearms, a thorough cleaning may be necessary to meet your maintenance standards.

Box, Paperwork & Accessories: This rifle comes in its original serial matching box with the previously mentioned sling and an original receipt of sale within a larger shipping box. The factory box shows a couple of minor tears on the inner components that hold the rifle in place. The outside shows a few minor creases and light edge wear. The box rates in about Very Good-Fine condition.

Our Assessment: Created in 1964 as a joint venture between Marlin and Remington, the .444 Marlin cartridge was developed to fill the space left after .45-70 lost popularity in the United States. Able to push a 240 grain projectile at 2,400 FPS, the cartridge can be used for even the largest game North America has to offer. It has an advantage over the .45-70 in that it was designed for use with smokeless powder, not for black powder. After the cartridge was completed, the Model 444 was released in 1965 and is just like a 336 with strength upgrades to handle the potent round. This rifle would be great for hunting or for a Marlin collection which doesn’t yet have a .444. The rifle is in about Fine-Plus condition with strong mechanics and a bright bore. Please see our photos and good luck!