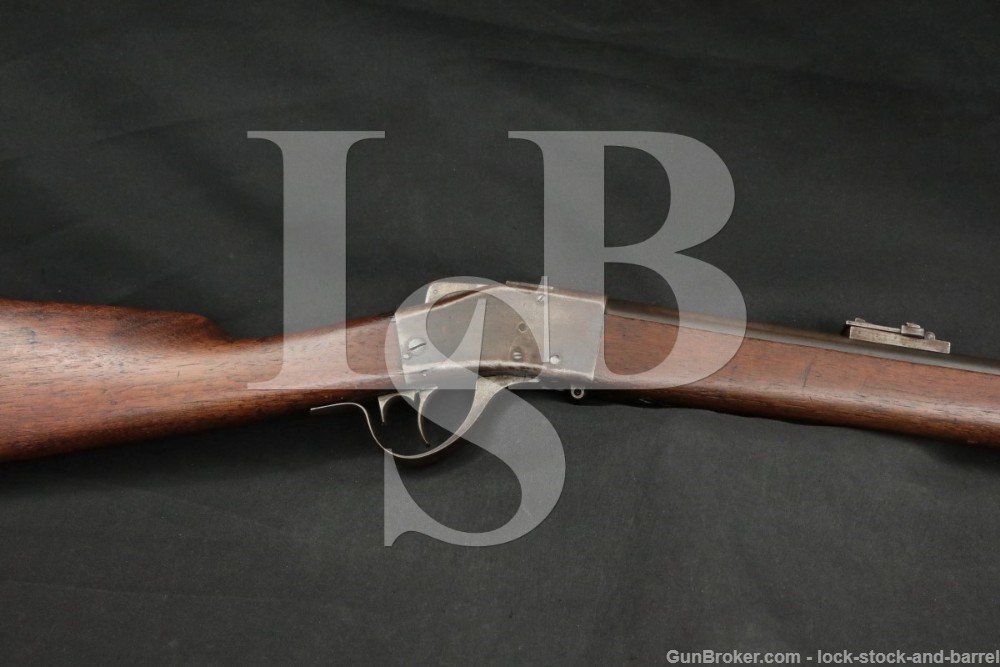 Bore Condition: The bore is gray. There is some scattered erosion. The rifling is strong with some light wear to the edges.

Mechanics: The action functions correctly. The rifle has a unique safety, which looks like a rear trigger. It is engaged when the lever is opened and must be slid rewards before the trigger can be pulled. We have not fired this rifle. As with all used firearms, a thorough cleaning may be required to meet your maintenance standards.

Our Assessment: The Sharps-Borchardt rifle was designed by Hugo Borchardt who became more famous in later years for his automatic pistol as well as the basic design for the Luger pistol. The hammerless Borchardt design came out too late to participate in the great bison slaughter, and as a consequence didn’t sell very well. Three variants were produced: Military, Sporting, and Express. The Military Sharps-Borchardt was made only in .45-70 with 32 1/8″ round barrels, whereas the Sporting and Express models were offered with octagonal barrels of varying lengths and calibers. The Military version was purchased by the Militias of the states of Michigan, North Carolina, and Massachusetts, and was also sold to foreign countries. About 6900 of the Military version were produced. Notwithstanding its lack of commercial success, the Sharps-Borchardt is admired for its strength and accuracy: reputed to be one of the strongest if not the strongest rifle action ever built before the 20th century. The gun was revolutionary at its time for its use of coil springs as opposed to flat springs. This one has had the forend cut but has nice mechanics and a lot of finish remaining, it will make a nice addition to your collection or fun restoration project. Please see our photos and good luck!