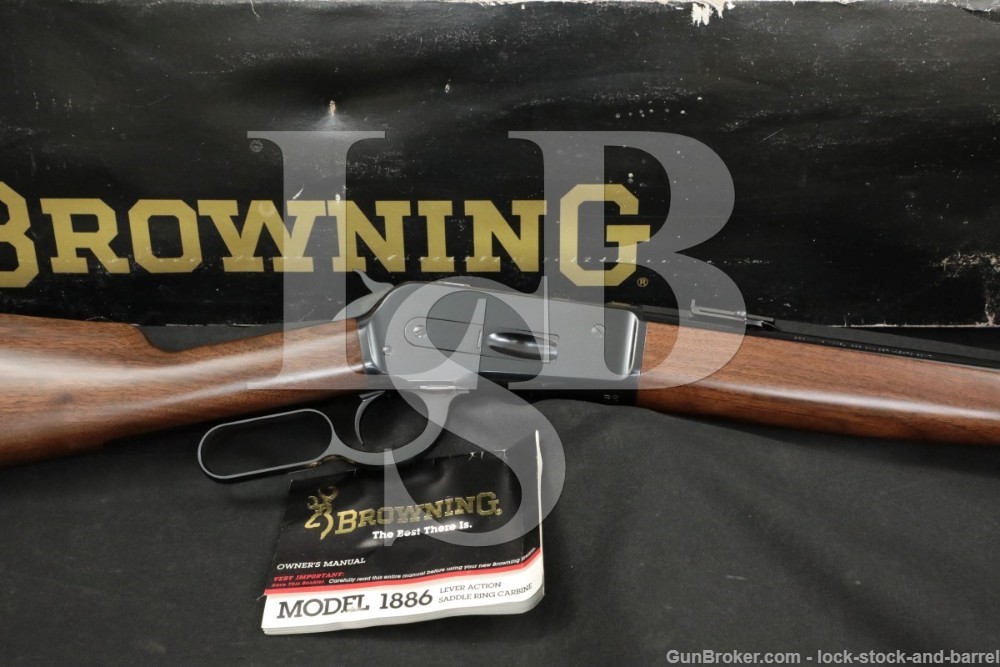 Sights/ Optics:  The front sight is a blade pinned to a mount atop the barrel in front of the barrel/magazine band. The rear sight assembly is dovetailed into a slot in the barrel. The assembly consists of a battle sight with a flat top and U groove, and a fold up ladder sight with markings from “0-20”.

Stock Configuration & Condition: The stocks are two piece walnut with a nice grain and a satin finish. The buttstock has a metal carbine style buttplate and the forend is held with a high luster blued band. The LOP measures 14” from the trigger to the end of the buttplate. The plate has no notable wear or damage. The stocks rate in Excellent overall condition.

Overall Condition: This rifle retains about 99% of its original finish. There is no notable wear or damage, only light handling marks. The screw heads are sharp. The markings are clear. Overall, this rifle rates in Excellent condition.

Box, Paperwork & Accessories: The rifle comes in its original box. The box is in Good condition but has wear from past use and storage, notably around the edges which have discolored. The top and sides have also begun to discolor with patches of cardboard showing through the paint job. The owner’s manual is included in the box, but has been folded, but is still fully readable and in Very Good condition. The original styrofoam cover and case for the rifle are included but the cover has some grease stains on it.

Our Assessment: This is a Browning model 1886 Carbine, a reproduction of the original Winchester which was, ironically, designed by John Browning. The 1886 followed up the 1876, providing a much stronger action which was able to withstand larger and more powerful cartridges such as the .45-70, the issue rifle cartridge of the U.S. Army at the time. The design would later be shrunk for the model 1892. This modern reproduction has the same action and was produced as a limited edition between 1992-1993 with only 7,000 Grade I rifles made and an additional 3,000 High Grade rifles. This one doesn’t appear to have seen much use, in Excellent condition. It retains 99% of its metal finish with a great bore, strong mechanics, and would make a great addition to any collection. With its 22” round barrel it’s fairly handy as .45-70 lever action rifles go. This would make a nice hunting rifle that could take just about any game in North America, though in such high condition, it will likely see interest from both Browning and Winchester collectors. If you’re looking for a .45-70 lever gun, you can’t do much better than this. Please see our photos and good luck!