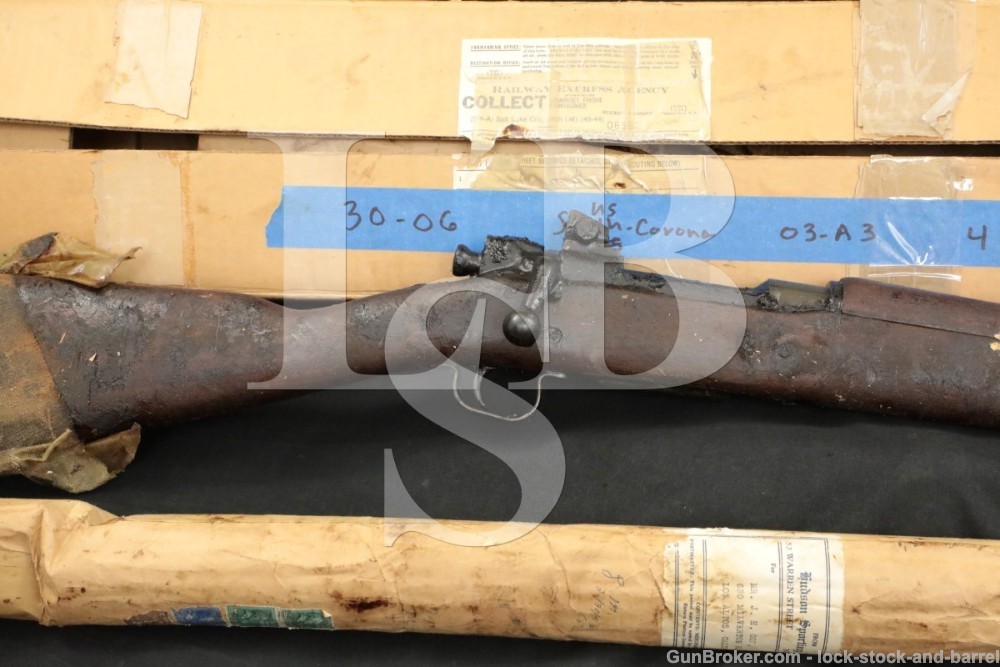 Markings: The rifle appears to have been shipped in 1956 and was in long term storage paper and cosmoline. We have only removed a small amount of cosmoline to view essential markings.
The top of the receiver is marked “U.S. / SMITH-CORONA / MODEL 03-A3 / 4817319”. The top of the Smith Corona barrel is marked “S C / flaming bomb / 10 43”.  The left side of the stock, above the trigger, is marked “RA” (Remington), “FJA” (inspector’s cartouche) and with an Ordnance Department “crossed cannons” cartouche.  The bottom of the grip is marked with “circled P” proof. The wood in front of the magazine floor plate is marked with a few inspection stamps that consist of “boxed & circled numbers”.
The top of the extra Reminton barrel is marked “R A / flaming bomb / 9 – 43”.
The shipping box for the rifle is marked with postage and with a shipping label from the”NATIONAL RIFLE ASSOCIATION OF AMERICA”.
The packaging for the extra barrel has postage & shipping on it. The markings include “Hudson Sporting Goods Co.” and a date in ink, “2/20/56”.

Sights / Optics: The front sight is set atop a raised base. The rear sight is an aperture sight.

Stock Configuration & Condition: Much of the wood is coated in cosmoline. The stock appears to be in about Very Good condition. It may be in much better condition but we cannot tell due to the cosmoline.

Bore Condition: We did not view the bore as it is filled with cosmoline.

Overall Condition: This rifle is coated in cosmoline. From the small amount we viewed, the finish appears intact. The rifle appears to be in about Very Good condition. It may be in much better condition but we cannot tell due to the cosmoline.

Mechanics: We have not cycled the action. We have not fired this rifle. As with all previously owned firearms, a thorough cleaning may be necessary to meet your maintenance standards.

Our Assessment: This Smith Corona 03A3 was made during WWII. It appears that it was shipped by the National Rifle Association sometime back in the late 1950’s (the newspaper in the box is dated 1958). The rifle was in long term storage. Much of the storage paper has been removed but the rifle is still coated in heavy cosmoline. The rifle comes with an extra Remington Model 1903 barrel that was purchased through a sporting goods company at about the same time. The extra barrel is also coated & filled with cosmoline. Many collectors prefer to leave surplus rifles in long term storage condition, for that reason we have not cleaned the rifle or barrel.