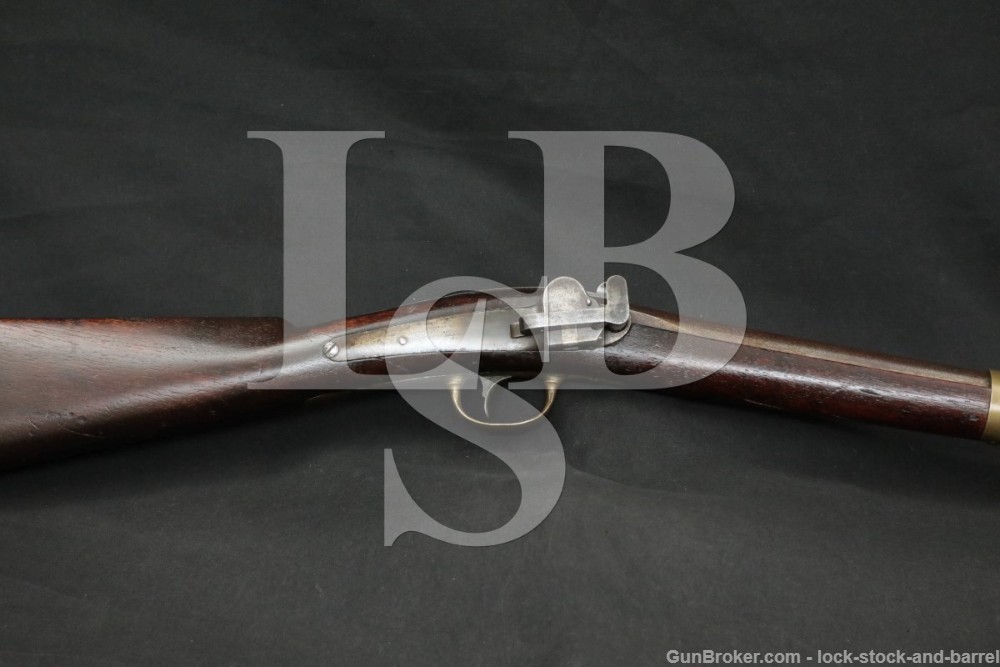 Markings: The lockplate is marked “REMINGTON’S / HERKIMER / N.Y.”. The top-rear of the barrel is marked “W. JENKS” and “&&& / R.P. / P / 1847 / CAST STEEL” the & signs are marked over “U.S.N.” markings. The underside of the loading arm is marked “4 / 22”. The top and bottom tangs are both marked “P” at the rear, the trigger guard is also marked “P”. The left side of the stock above the front of the trigger guard is marked with an “R.P.” inspectors cartouche, the same initials that are on the barrel. The interior of the primer door has a faded number that looks like “16”.

Sights / Optics: The front sight is a short rounded blade integral to the front barrel band. There is a small “V” groove in the top of the loading lever that can be used for sighting.

Stock Configuration & Condition: The stock is one-piece smooth walnut with two brass barrel bands, straight comb, straight grip, and a brass buttplate. There are cracks on the wrist, some are on the sides of the bottom tang and some are at the rear of the top tang. The cracks on the top of the wrist have been repaired and have some filler. The stock has scattered compressions, draglines, scuffs, and dings scattered throughout. There are some light scratches and scrapes, some have removed light portions of surface wood, the most noticeable are on the right side of the forend, left edge of the forend, and left side of the buttstock. Many of the defects have aged and darkened. The LOP measures 14 1/4″ from the front of the trigger to the back of the buttplate. The plate has mottled tarnish with a few scattered little dings. Overall, the stock is in about Very Good condition.

Bore Condition: The smooth bore is gray with scattered patches of erosion.

Overall Condition: This rifle retains about 45% of its metal finish. This rifle has not been altered for paper cartridges or rifled. The barrel has scattered discoloration from previous oxidation, mottled thinning, patina, light scabbing, and some erosion. The lockplate has some dark patina, finish loss, spots of dark discoloration from previous oxidation, and a few pinpricks,. The top tang, loading lever, and lock components have some light erosion, dark discoloration from previous oxidation, scratches & finish loss from abrasive cleaning, and some spots of erosion. The erosion is heaviest on the hammer. The brass components gave tarnish and verdigris patina. The nipple is in surprisingly good shape but is obstructed. The markings are clear. The screw heads range from sharp to tool marked with strong slots. Overall, this rifle is in about Very Good condition as Antique.

Our Assessment: Between 1843 and 1846 the NP Ames Company of Springfield, Massachusetts produced 4,250 of the standard Jenks breechloading percussion carbines for the US Navy. In 1847, an additional 1,000 “improved” Jenks carbines were ordered from E. Remington & Sons of Herkimer, New York, which included the automatic Maynard Patent Tape Priming system. With the coming of the Civil War, nearly all of the carbines were subsequently altered. The round loading port which was designed for loose powder and a round ball was enlarged to an oval opening which allowed the loading of paper cartridges. The majority of the carbines were also rifled during the alteration process. With the beginning of the Civil War in 1861, the majority of the Jenks carbines were altered by rifling. Arthur Eastman & Simon Stevens contracted to alter 2,800 of the Jenks carbines by rifling their barrels. The Navy preferred this “improved” version of the Jenks carbines and made a concerted effort to issue the tape primer-equipped carbines to their small fleet of newly built screw frigates and according to John McAulay, each frigate typically received 70 of the Remington made Jenks carbines. This is one of the Remington-made models, with only 1,000 made these are already rare but this one is made even more scarce by the fact that it is unmodified. Today, it is very difficult to find a smoothbore Jenks carbine and nearly impossible to find an original configuration smoothbore Jenks with a round loading hole like this one. If you are a Remington or collector of American martial arms this is a rare opportunity so don’t miss out. Please see our photos and good luck!