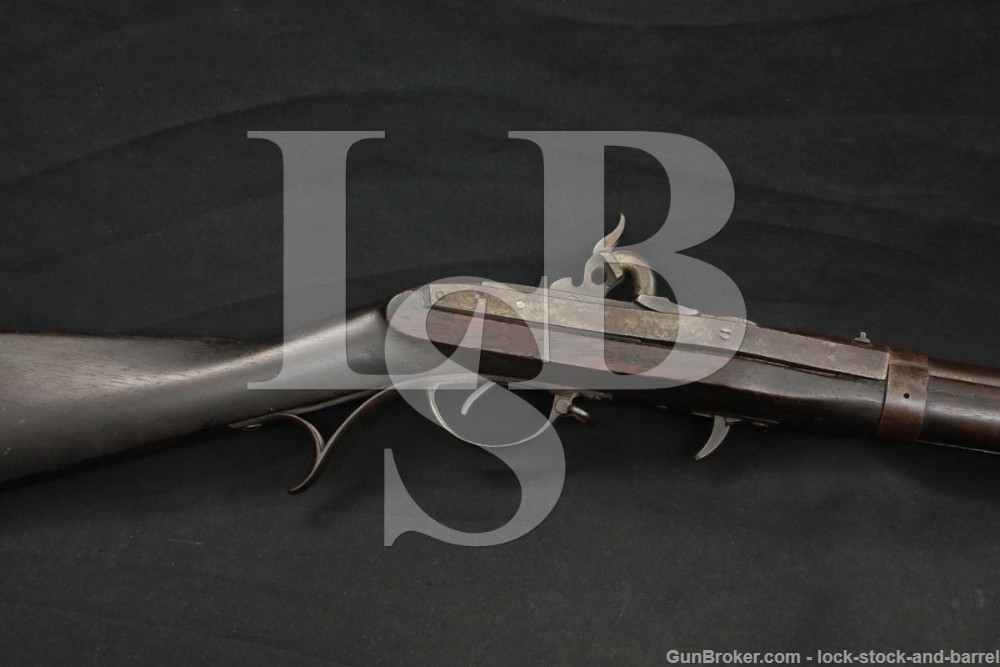 Sights / Optics: The front sight is a blade dovetailed into the barrel. The rear sight is a “V” notched base that is dovetailed onto the barrel; the sight is off-center by design, as the hammer sits in the way of a normally ‘centered’ sighting system. The base has a small hash mark that is aligned with a centering mark on the barrel.

Stock Configuration & Condition: The smooth walnut stock has a straight comb, steel buttplate, and three barrel bands; the middle has a sling swivel, the forward one has two top straps and houses the steel ramrod. There is a crack on the top of the wrist that has been repaired. There is a crack on the right side of the buttstock at the rear and what is either a deep scratch or a split in the wood grain on the left side of the buttstock down by the belly. There are some scattered compressions, dings, little scrapes, and a few scratches. Most of the marks have colored with age. There is some material loss at the toe. The LOP measures 14 1/4” from the front of the trigger to the back of the metal buttplate. The plate has some scattered erosion, patina, and scabbing. The stock rates in about Very Good overall condition.

Bore Condition: The bore is dark and the rifling is pronounced; the rifling stops 1.3” from the muzzle. There is erosion and oxidation in the bore.

Overall Condition: This rifle has lost its finish and has turned to a patina. There is a coat of scabbing, discoloration from oxidation, erosion, and some scuffs. The metal shows some little dings. The screwheads show use with tool-marked heads, a couple are sharp. The markings are a little rounded but easily read. Overall, this rifle rates in about Very Good condition.

Our Assessment: ”In March 1819, the government hired John Hall to oversee the manufacturing of his patented rifles at Harpers Ferry Armory. Over the next 25 years, Harpers Ferry produced 19,870 flintlock and 3,000 percussion Hall rifles. Additionally, 5,700 flintlock Hall rifles were contracted for and manufactured by Simeon North of Middletown, Connecticut. The first deliveries to the field occurred in September 1825. One hundred twenty Hall rifles were sent to Fortress Monroe, Virginia, for use by the artillery school of practice. On July 27, 1826, 87 Hall rifles were issued to the two light companies at the school. They were used for guard duty, parades, drills and practice. The rifles were subject to all services performed in a garrison environment. The day after their issue to the two light companies, test trials were conducted on the rifle’s serviceability. These trials lasted for the next five months. In trials for accuracy, at a distance of 408 yards, the Hall struck the 12-foot-square target 21 times, while the Model 1803 rifle struck the target 14 times and only four times for the smoothbore musket. A Hall rifle was discharged 8,710 times and found still in serviceable condition. The December 11, 1826, report from the school was of the opinion that the Hall rifle was superior to all other types of small arms then in service. With these favorable results, the four light infantry companies at the infantry school at Jefferson Barracks Missouri were directed to be issued Hall rifles.” – McAulay. This rifle has a well-preserved wood stock with nice markings and is in good working order. The rifle was converted to percussion which was commonly done by the Confederacy during the Civil War. This highly historic rifle would do well in ANY early American or military firearm collection. Please see our pictures and good luck!