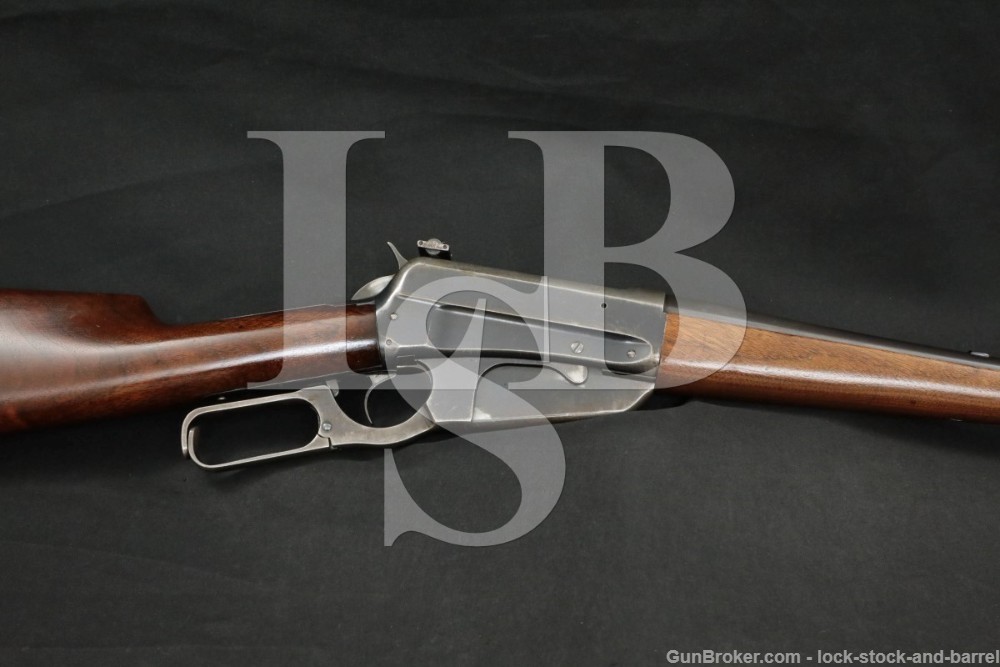 LSB#: 210606JV57
Make: Winchester
Model: 1895
Serial Number: 410339
Year of Manufacture: 1924
Caliber: .30 Army (.30-40 Krag)
Action Type: Lever Action with Internal Box Magazine.
Markings: The left side of the receiver is marked “MANUFACTURED BY THE WINCHESTER REPEATING ARMS CO. NEW HAVEN, CONN. U.S.A. / PATENTED NOV. 5. 95. NOV. 12. 95. AUG. 17. 97. JAN. 25. 98. AUG. 23. 98. AUG. 6. 1907.”. The upper tang is marked “MODEL   95 / -WINCHESTER- / TRADE MARK REG. U.S. PAT. OFF. & FGN.”. The lower tang is marked “410339” and “B”. The left of the barrel is marked “-NICKEL STEEL BARREL- / ESPECIALLY FOR SMOKELESS POWDER” and “30 ARMY”. The top-rear of the barrel and the top of the chamber ring each have an ovalled “WP” proof.
Barrel Length: 24”
Sights / Optics: The front sight is a blade, missing the bead atop a serrated ramp. The rear sight is a Lyman peep sight mounted to the left of the frame. The rear barrel dovetail is filled with a blank.
Stock Configuration & Condition: The stocks are two-piece smooth walnut with a Schnabel forend with ebony tip, straight wrist, straight comb, and steel crescent buttplate. There is an inlaid black circle on the forearm behind the tip. Both pieces have been lightly sanded and varnished, though the fit remains very good. There are scattered dings and marks – mostly to the toe and belly. The LOP measures 12 3/4″ from the front of the trigger to the back of the buttplate, which shows about 80% finish and little wear. The stocks rate in about Very Good – fine overall condition.
Type of Finish: Blue
Finish Originality: Factory Original
Bore Condition: The bore is a little dark, especially in the grooves and the rifling is pronounced. There is even but mild erosion in the bore. The bore would benefit from a good cleaning.
Overall Condition: This rifle retains about 75% of its metal finish. The balance of the finish shows surface marking and edge wear. This was a working rifle and though it still has a lot of finish, it has the appearance of having served its owner well. The tangs, lever, receiver ring and magazine show the most thinning. The screw heads are lightly worn but still very usable. The markings are clear. Overall, this rifle rates in about Very Good condition.
Mechanics: The action functions properly. We did not fire this rifle. As with all used firearms, a thorough cleaning may be necessary to meet your maintenance requirements.
Box, Paperwork & Accessories: None
Our Assessment: The 1895 Winchester was the first lever action model to incorporate a non-detachable box magazine. This is the model Teddy Roosevelt called his “Big Medicine” that he used in hunting here and in Africa. With its quick handling characteristics, box magazine and spitzer bullet capability, the Model 1895 changed the world of sporting rifles forever. The 1895 was used by major powers worldwide, with Russia alone purchasing nearly 300,000 1895’s to supplement their own arms production during World War I. In 1898, the United States ordered 10,000 of the rifles in musket form with handguard for use in the Spanish-American War, but the war ended before they could be delivered. One hundred were issued for field testing in the Philippines and the remaining 9,900 were sold to M. Harley Company. Many of these were shipped to the new Cuban government in 1906 and some found their way to Pancho Villa’s troops in Mexico. The U.S. Government also ordered carbines, but we can’t find records as to how many.
This 1895 “Model 95” was made in 1924 during the inter-war years. It is chambered in .30-40, which is suitable for some of the more common North American game. This example shows wear consistent with use in the field over the last 100 years and is in great mechanical shape with a very shootable bore. This should make a nice addition to a collection of Winchester lever-action rifles or could still be used as a hunting rifle.
Please see our photos and good luck!