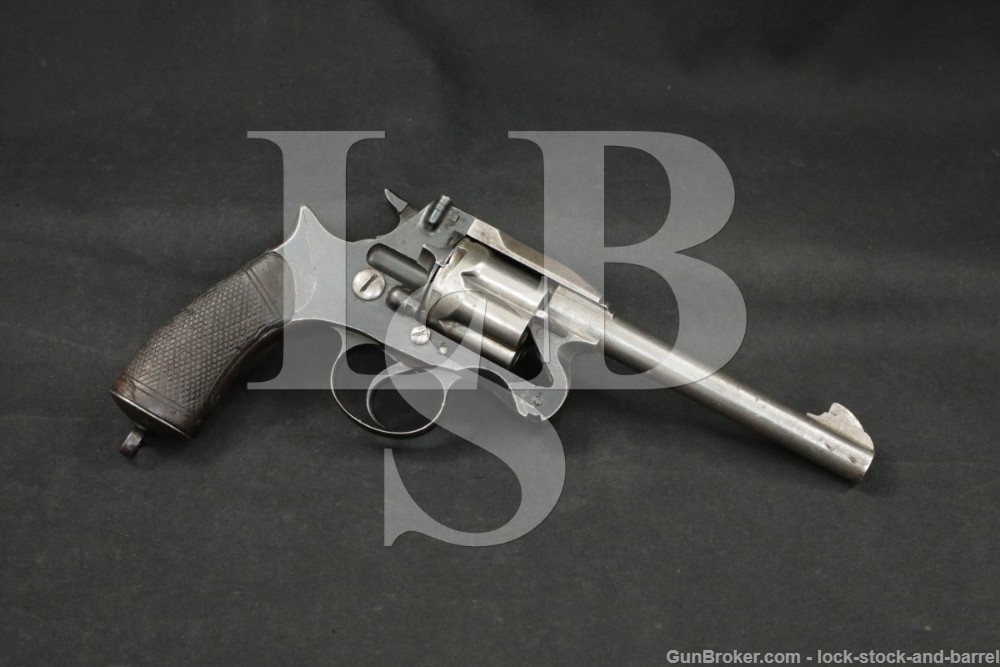 Stock Configuration & Condition: The grip is one-piece checkered walnut. The grip has scattered nicks, scuffs and scratches. There is a small loss at the front edge on the right side, toward the top. The checkering is generally well defined. There are no cracks. Overall, the grip is in Very Good-plus condition as Antique.

Finish Originality: Remaining finish is Original, much of the barrel and cylinder appear to have been intentionally polished bright.

Bore Condition: The bore is semi-bright with well defined Henry-style rifling. There is some scattered light erosion and minor pitting in the bore.

Overall Condition: This handgun retains about 40% of its metal finish. Most remaining finish is on the sides of the frame, on and around the trigger guard, and the bottom-rear portion of the barrel assembly where it meets the hinge. Most of the bore-portion of the barrel, the topstrap and the cylinder has been polished bright. The grip straps have wear and light erosion. There are many scattered nicks, scuffs and scratches. There is scattered minor oxidation, mostly in the nicks and scratches. There is some erosion in the polished areas, most notable at the muzzle. The action shows operational wear. The screw heads range from tool marked with strong slots to disfigured with useable slots. The markings are generally clear, some of the proof marks are worn, but visible. Overall, this revolver is in Very Good condition as Antique.

Mechanics: The action functions correctly. The barrel lockup has light-moderate play and the cylinder lockup has little play on each chamber when the trigger is depressed. The ejector/extractor works correctly. The double action trigger pull is fairly smooth, the single action trigger has some creep. We did not fire this handgun. As with all used firearms, a thorough cleaning may be necessary to meet your maintenance standards.

Our Assessment: The Enfield MkI revolver was developed by RSAF Enfield to supply the British Army with a new repeating cartridge sidearm. It uses an interesting extraction/ejection system in which the cylinder remains in-line when the barrel is opened, pulling the cylinder forward far enough to extract fired cases, but not far enough to allow loaded cartridges out the sides. Fresh cartridges can then be loaded singly through a side loading gate. The revolver was chambered for a cartridge, .476 Enfield, which fired a rather large bullet, though it moved particularly slowly. There were some safety updates made to the design in 1882, but this is an original MkI design, produced before these improvements were implemented. While the mechanism and cartridge were ultimately found wanting, these revolvers were issued during a very interesting time in British history and it certainly has a unique appearance. This is a very interesting Enfield revolver and will make a prized addition to a British sidearm or Enfield specific collection. Please see our photos and good luck!