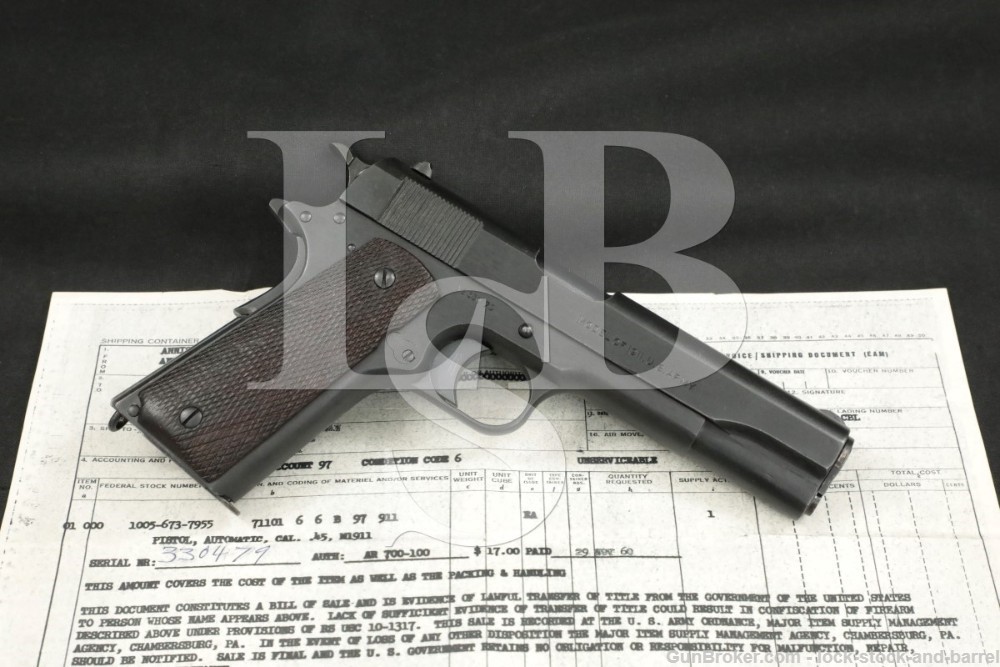 Stock Configuration & Condition: The grips are two-piece checkered walnut panels. The grips have scattered light wear. There are some compressed checkers and light tool marks around the screw heads. The checkering is generally well defined. There are no chips or cracks. Overall, the grips are in about Very Good condition as not original to the gun.

Overall Condition: This pistol retains about 95% of its current metal finish. The finish is generally strong throughout with only a few scattered minor marks through the finish. Most of the balance is in light operational wear. There are scattered nicks, scratches and infrequent minor erosion under the finish, mostly on the slide. There is some scattered minor surface oxidation. The action shows minor operational wear. The screw heads range from sharp to tool marked with strong slots. The markings are clear. Overall, this pistol is in about Very Good-Fine condition as Arsenal Refurbished.

Box, Paperwork & Accessories: This pistol comes with a single 7-round General Shaver magazine, marked “G” on top of the floorplate and with General Shaver’s distinctive spot-weld construction. The magazine shows light operational wear with intact feed lips and a strong spring, in about Fine condition. Also included is a form showing this pistol by serial number being sold out of service from Anniston Ordnance Depot to a Captain William D. Lehman in November, 1960.

Our Assessment: The 1911 and 1911-A1 pistols served the military of the United States from 1911 to 1985, through two World Wars and the Korean and Vietnam wars. They gained a reputation as a reliable handgun with plenty of stopping power, and are held in high regard by those who have used them. This is a U. S. Government marked Colt 1911 pistol made during WWI in 1918. The pistol has since been refurbished by Augusta Arsenal, though unlike many of the arsenal refurbished pistol we have seen, this one appears to have been re-worked before parkerizing became the standard finish for 1911/1911A1 pistols, having a military blued finish. The pistol appears to have stayed in inventory until 1960 based on the included form which lists it sold out of service from Anniston Ordnance Depot. The pistol is in about Very Good-Fine condition as refurbished, retaining about 95% of its new blued finish, a great bore and strong mechanics. The pistol has several WWI production features with the most notable features of its refurbishment being the new finish, its post-WWI barrel and its fully checkered grips. This is a great example of a 1911 that was in inventory for every major conflict while the model was standard issue, from WWI to the early years of the Vietnam War. It should make a nice addition for the 1911 collector and should still make for a good shooter. Please see our photos and good luck!