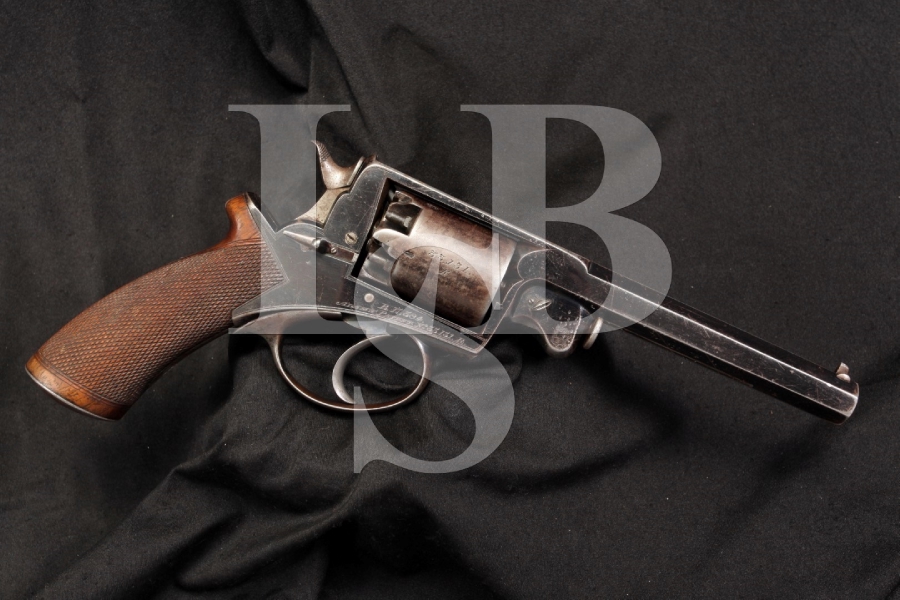 SOLD FOR: $2,350
Make: Beaumont – Adams
Model: Double Action Percussion
Serial Number: B. 17,384
Year of Manufacture: 1857 – 1866
Caliber: 54 Bore (.442 Caliber)
Action Type: Single and Double Action Cap and Ball Revolver
Markings: The top left barrel flat is marked “LAC” (London Armoury Co.), Crown Over “CP” (Final Black Powder Proof Mark – London) and Crown Over “V” (Inspector’s “View” mark after final proof.) The right side of the frame, under the cylinder window is marked “B. 17,384 / Adams’s Patent No. 33,131.R.” The right side of the frame, opposite the loading lever’s pivot screw, is marked “LAC” inside a Crest which has a Crown above, which was double stamped. The loading lever is marked “5544” which we believe to be an assembly number, as it is also found on the inside of the trigger guard and the rear face of the cylinder. The cylinder’s rear face has an additional “54”. The circumference of the cylinder has either a Crown over “CP” or a Crown Over “V” at each chamber and “33,131 / R.” marked once. We have not disassembled the revolver, further, nor have we removed the grips.
Barrel Length: about 6”
Sights / Optics: The front sight is a dovetail set blade. The rear sight is a “V” notch at the rear of the top strap.
Stock Configuration & Condition: The one piece grip is checkered walnut with an oval metal grip cap. Several of the checkering diamonds have been lightly damaged and the sharpness of the checkering as a whole shows some wear. These grips have survived amazing well for being about 150 years old. The grips rate in about Fine overall condition.
Type of Finish: Blue
Finish Originality: All Original
Bore Condition: The bore is gray and the rifling is a little worn, but clearly visible throughout the length of the barrel. There is some light erosion scattered evenly down the bore. There is none of the pitting so often seen in black powder bores from this era.
Overall Condition: This handgun overall retains about 75% of its metal finish. It appears that the frame/barrel, cylinder and trigger guard were all originally a dark blue, while the loading lever, cylinder pin, trigger and safety may have been a lighter, more fire-blued color. The pistol grip cap and hammer retain no currently visible finish and we are not sure what the original finish was. The frame/barrel might retain 90% of its finish, with the most notable scratch showing on the frame’s left side where a screwdriver wondered off the hammer pivot screw. The cylinder and trigger guard retain less than 50%. The fire-blued areas are all very faint, with the best remaining finish on the backside of the loading lever and the safety. There is light scattered pinprick erosion throughout, the sharp edges on the octagon barrel show minor dings and there is a series of small compression marks near the cylinder pin locking screw. The screw heads all show marks of a screwdriver, however they are all reasonably sharp and appear to be original. The markings are clear. Overall, this handgun rates in about Excellent condition for an antique.
Mechanics: The single and double actions function correctly, with the exception of what seems to be a weak trigger return spring. The right side of the frame has a sliding safety bar that locks the cylinder in place with the hammer positioned between chambers. There is a small screw acting as a stop for the cylinder pin locking screw, such that the locking screw cannot loosen and be lost. We did not fire this handgun.
Box, Paperwork & Accessories: None
Our Assessment: This is a very well preserved example of a Beaumont Adams Double Action Percussion Revolver. The gun is extremely well thought out, as evidenced by the cylinder locking bar and cylinder pin screw stop, mentioned in the Mechanics section above. It was approved for use by British officers, seeing action during the Crimean War, and used by both sides during the U.S. Civil War. The London Armoury Co. is said to have shipped 7,000 of these revolvers to the Confederacy, although it is unknown how many were received due to the Northern blockade. Wikipedia has an interesting history of this firm: http://en.wikipedia.org/wiki/London_Armoury_Company.

In John D. McAulay’s “Civil War Pistols of the Union” he states: “The 1st Virginia Cavalry was listed as carrying the Adams. Cased sets are known to have been presented to Jeb B. Magruder and: “Stonewall” Jackson.”

Due to the lack of U.S. markings and its existence in the United States, this handgun was not likely to have been issued to Northern troops, but was very likely used by a Southern soldier.

This is an important revolver, in Excellent antique condition, an early example of a double action revolver. It could be a great addition to collections as varied as British Martial Handguns, British Percussion Revolvers, U.S. &/or C.S.A. civil war handguns and early percussion revolvers.