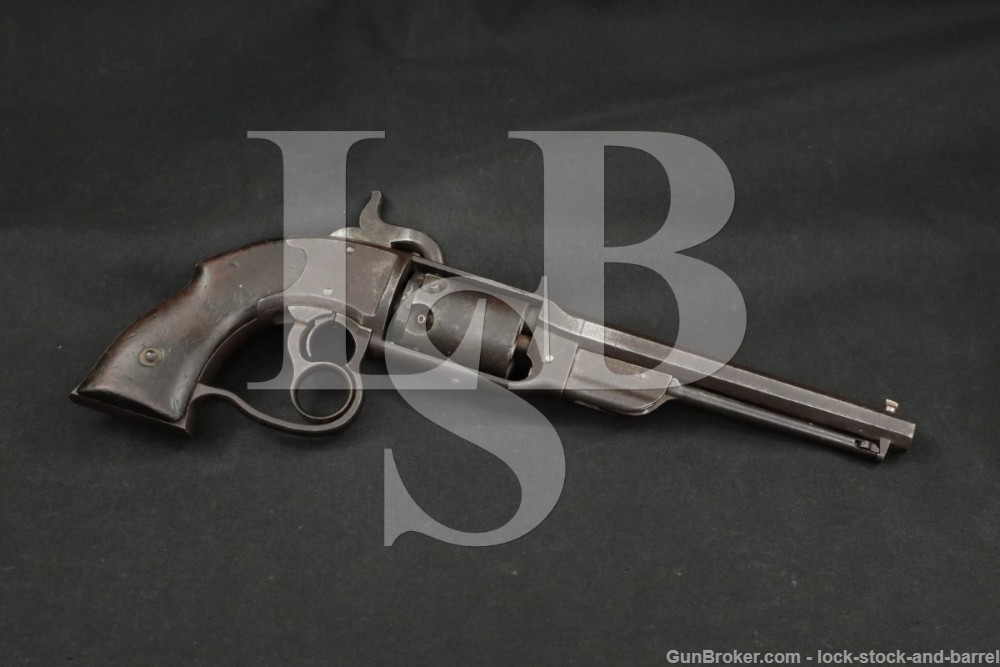 Sights / Optics: The front sight is a steel post, screwed into the barrel. The rear sight is a “V” notch mounted to the frame on the top strap.

Stock Configuration & Condition: The grips are two-piece smooth walnut panels. The grips have scattered light nicks, dings, scuffs and scratches. There are very small losses at the bottom corners of each grip. There are no cracks. The grips rate in about Very Good overall condition as Antique.

Bore Condition: The bore is semi-bright and the rifling is sharp where not interrupted by erosion. There is some scattered light erosion and infrequent pitting in the bore.

Overall Condition: This handgun retains about 3% of its metal finish, all in case color visible on protected areas of the trigger and hammer. Other surfaces have mostly gone to a moderate patina, the topstrap markings appear to have been polished at some point to make the markings more legible. There is scattered surface erosion with some nicks, scuffs and scratches. The screw heads are lightly tool marked with strong slots. The markings range from clear to worn and incomplete. Overall, this handgun rates in about Very Good condition as Antique.

Mechanics: The action functions correctly, though the mainspring feels a little weak at the end of travel. This revolver has a unique ring-lever in the ‘heart shaped trigger guard’, which operates a toggle which brings the cylinder back, while also operating the hand, advancing the cylinder to the next chamber. The smaller upper trigger releases the hammer. The cylinder produces moderate side to side play. The revolver has a loading lever, intriguing off-set components to provide balance, and an oddly comfortable rounded grip strap which forces the user to grab low on the straps. We did not fire this handgun. As with all used firearms, a thorough cleaning may be necessary to meet your maintenance requirements.

Our Assessment: According to Flayderman’s Guide, about 20,000 civilian and military Savage R.F.A. Navy Model pistols were produced from 1861 until the mid 1860’s, putting its production in the heart of American Civil War years; this pistol bears an inspector mark “M” on major components, likely martial inspection marks, but has no cartouches on the grips. The surfaces show their age but the gun is mechanically sound. Coming from one of the most contentious and studied eras of American history, it is sure to spawn decades of conversation on the potential role it played. We’ve seen some odd mechanisms on Civil War era firearms but this one takes the cake. Looking cumbersome at first, upon handling, one can see why members of the Cavalry would have liked this hefty, quick pointing and unique lever action pistol. Please see our pictures and good luck!