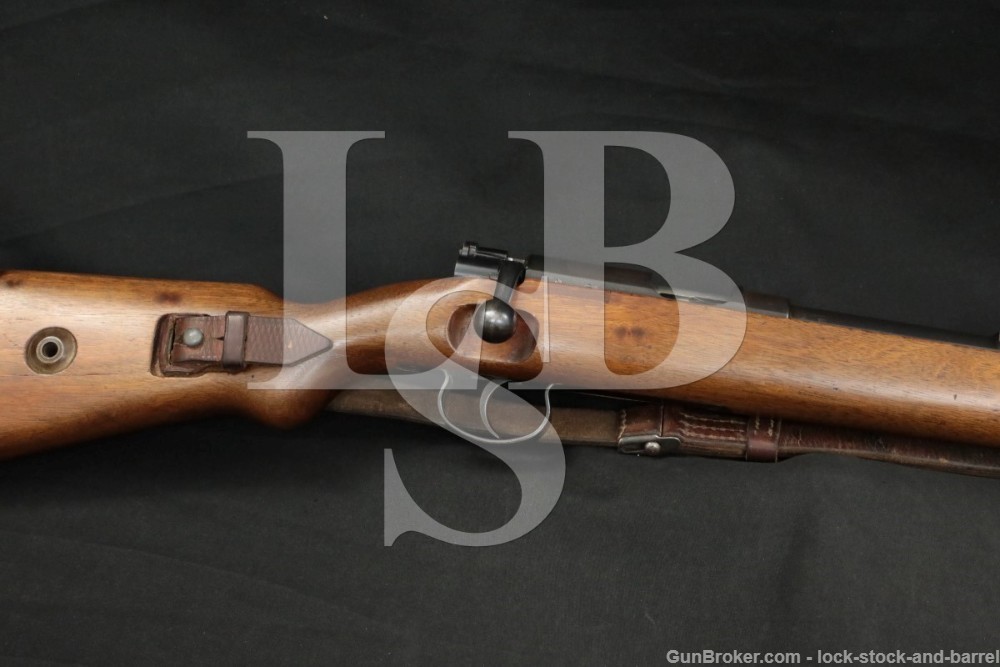 Sights / Optics: The front sight is a blade dovetailed into the top of a serrated, ramped, banded base on the front of the barrel. The rear sight is a “V” notched sliding elevator sight. The top of the elevator is marked in 25 meter increments from “25” to “200”. The right-rear of the receiver has two drilled, tapped and filled holes for mounting a receiver sight (none present).

Stock Configuration & Condition: The stocks are two-piece smooth walnut with a nosecap, barrel band holding the handguard in front of the rear sight, bolt disassembly discs on each side, and smooth steel buttplate. There is a pass-through sling cut with a post on the right of the buttstock and the barrel band has a sling ring on the left side. The stock has scattered nicks, dings, scuffs and scratches. There are repaired breaks in the buttstock, with a crack through the stock from the rear edge, under each bolt disk, and forward to the sling pass-through. There are cracks between the trigger guard and sling pass-through on each side. There is a crack extending forward from the top-front of the sling pass-through on each side, meeting in the top of the wrist. There is a crack at the rear edge of the receiver tang in the top of the wrist. There is a patch on the top-right below the receiver-sight screws where the stock was relieved for a previously installed sight. The LOP measures 13 1/8? from the front of the trigger to the back of the buttplate. The plate has scattered light wear and minor surface oxidation. Overall, the stocks are in about Good condition as refinished and repaired.

Overall Condition: This rifle retains about 95% of its metal finish. There is infrequent minor surface oxidation, mostly in the bottom metal. The bottom metal has some light wear on the edges of the trigger guard. There is minor wear at the muzzle. The action shows light operational wear. The screw heads range from sharp to lightly tool marked with strong slots. The markings are clear. Overall, this rifle is in about Very Good condition and would rate Fine but for the repaired damage to the stock.

Mechanics: The action functions correctly. It has a Mauser 3 position safety: up blocks the trigger and to the right blocks both the trigger and the bolt. We did not fire this rifle. As with all used firearms, a thorough cleaning may be necessary to meet your maintenance requirements.

Box, Paperwork & Accessories: This rifle comes with a leather sling which shows light wear and some minor discoloration, in about Very Good condition.

Our Assessment: This is a Kleinkaliber Wehrsportgewehr, roughly translated as a Small Caliber Military Sport Rifle, made by Walther between 1938 and 1944. The KKW was a .22 caliber training rifle made by several German companies during WWII as a development of a German program to encourage civilian marksmanship which started with the DSM-34. The KKW addressed concerns that the DSM-34 was not close enough in handling characteristics and appearance to the military issue K98. Improvements included a bayonet lug and dimensions much closer to the military issue rifle. The program was aimed at drilling of citizens with military training rifles under the guise of recreational marksmanship rather than explicit military training, starting before the war and continuing and expanding during the war. The KKW was made by a few different manufacturers, and the Walthers are the most scarce with fewer than 6,000 produced. This example is in about Very Good condition with about 95% of its metal finish, a great bore, and strong mechanics. The buttstock has been damaged, but since repaired. It’s nice that the stock was restored as it has a cartouche indicating it was purchased by the Sturmabteilung or “SA”, a paramilitary branch of the Nazi party. While the SA would continue operating through the end of WWII, it fell out of favor with Hitler in 1934, mostly being supplanted by the SS. This is a neat little piece of WWII history and ought to interest the collectors. For the shooters, this is a simple, reliable single-shot .22 that should make for a fun day at the range. Please see our photos and good luck!