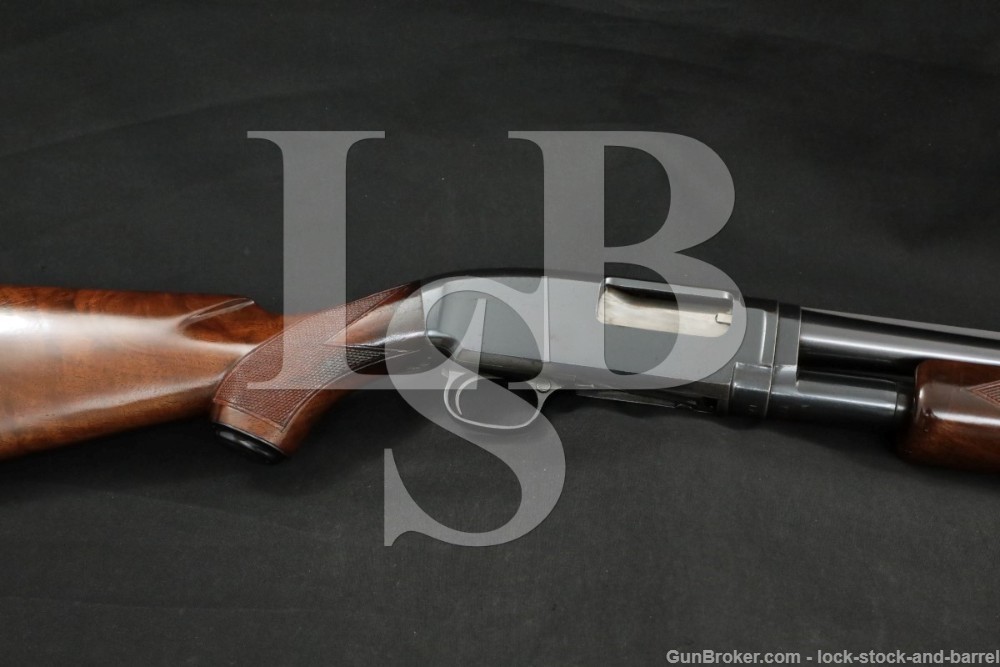 Markings: The left of the barrel is marked “WINCHESTER / TRADE MARK / MADE IN U.S.A. / -MODEL-12-20 GA.- 2 ¾ CHAM. – / -WINCHESTER PROOF STEEL- / FULL”, and with a “WP” in oval proof at the rear, found again on the top of the receiver. The bottom of the frame and the barrel extension are marked with the serial number. The bottom of the barrel extension and the magazine tube have indexing arrows pointing at each other. The butt plate is marked “WINCHESTER”. “KB” is stamped behind the trigger guard.

Sights / Optics: The front sight is a bead at the front of the rib, the tops of the rib and receiver are serrated to reduce glare. The bead is likely a replacement.

Stock Configuration & Condition: The stocks are a two-piece walnut set with factory checkering and a smooth pistol grip cap. The wood is a higher grade than normal. Both pieces have several scratches and marks, the heaviest being on the left side of the forearm and the toe of the stock. The wood has darkened from oil staining and handling, but this gives it a nice untouched appearance. The checkering is pronounced with some damage to the right side of the pistol grip. The LOP measures 14” from the front of the trigger to the rear of the plastic butt plate, which is scratched and dinged from use and storage but still Good. Overall, the stocks are in about Good – Very Good condition.

Bore Condition: The bore is bright. There is no erosion but there is some wad fouling and light marks from cleaning.

Overall Condition: This gun retains about 92% of its metal finish. The finish is just beginning to thin at some edges and there is very light freckling beginning to form on the flats. The barrel has a few scattered light marks and some scattered freckles. The magazine tube has light operational wear. The receiver has a few scattered light marks and scratches, and the wear is apparently more from storage and transportation than from use. There isn’t even the usually seen damage from reassembly. The screw heads are sharp. The markings are clear. Overall, this gun rates in about Very Good – Fine condition.

Our Assessment: The Model 1912 (shortened to Model 12 in 1919) was the next step from the Winchester Model 1897 hammer-fired shotgun, which in turn had evolved from the earlier Winchester Model 1893 shotgun. The Model 12 was designed by Winchester engineer T.C. Johnson, and was based in part on the M1893/97 design by John M. Browning, in that it used a sliding forearm or “pump action” to cycle the mechanism. It was initially available in 20 gauge only (12 and 16 gauge guns were not sold until late 1913).

The Model 12 was a very successful internal hammer pump-action shotgun. Its tubular magazine was loaded through the bottom of the gun. Empty shotgun shells ejected to the right. Depending on the particular wooden plug installed in the magazine, two, three, or four shells could be stored in the tubular magazine. The magazine holds six 2¾-inch 12 ga. shells, when no plug is installed, unlike most shotguns of today which hold four or five shells. With forged and machined steel parts, the ultimate reason for discontinuation in 1964 was that it was too expensive to produce at a competitive price. The primary competition at this time came from the much less expensive Remington Model 870, which had been introduced in 1950.

This is a desirable and attractive gun with a factory rib, factory checkered stocks and uncut butt. The only thing not original to the gun is the bead and we think the collectors and the shooters will be fighting over this one.