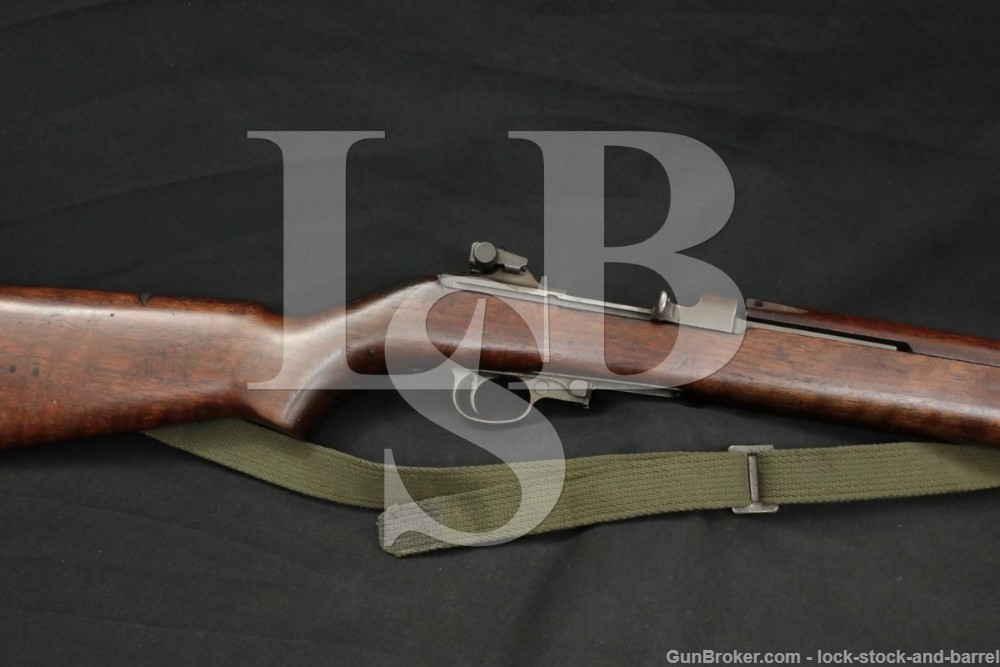 Stock Configuration & Condition: The two piece hardwood stock has a

pistol grip, barrel band with sling loop, sling well, sling pass through and metal buttplate. The wood shows several scrapes, scratches and compression marks. There is a loss at the rear of the top right side of the handguard. The grip shows a few condensed scratches and scrapes.  Many have damaged or removed small portions of the surface wood. Some of these marks have been oiled over. The LOP measures 13 inches from the front of the trigger to the back of the buttplate. The stock rates in about Very Good overall condition.

Bore Condition: The bore is mostly bright; The rifling is sharp & deep. There is some fouling on the lands and infrequent minor erosion at the muzzle.  The bore shows an M.E. of 2.

Overall Condition: This rifle retains about 92% of its metal finish. Light surface erosion shows through the finish on the barrel. There is some minor xidation on the bolt cam. The trigger group has some minor oxidation. The bolt shows some light erosion. The metal shows a few small scratches and light discoloration. The markings are well defined. Overall, this rifle rates in about Very Good Plus condition.

The rifle comes with a green canvas sling. It shows scratches & oxidation on the metal as well as light discoloration in the canvas. Overall it is in about Very Good Plus condition.

Our Assessment: The war effort in the United States during WWII took over huge portions of the economy. In many cases, companies who made purely peaceful products would turn their manufacturing capacity over to making war materiel. Underwood, a typewriter manufacturer, was one such company and made more than half a million of the rifles between 1942 and 1944. Almost all of the identified parts on this example are from Underwood with the same serial range.  Luckily the “UNDERWOOD” receiver marking is not crossed out as is the case for many Underwood subcontractor receivers. Underwood made about 8.9 percent of the M1 carbines produced in 1942-1944. This will make a nice addition to a military rifle collection, and could still be a fun shooter.