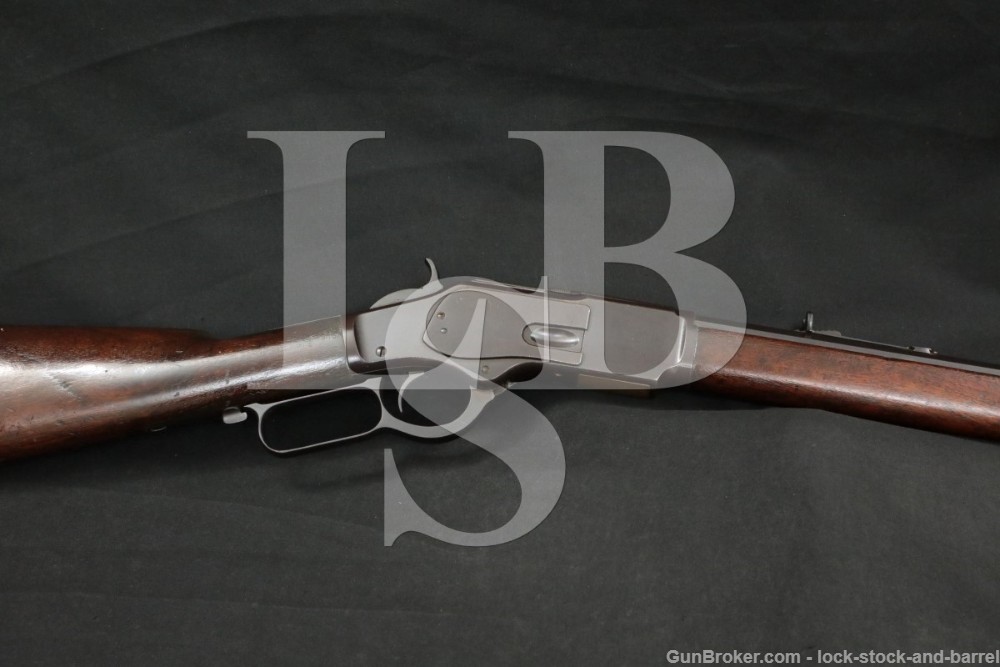 Sights / Optics: The front sight is dovetail set blade. The rear sight is a semi-buckhorn leaf and elevator sight, also set in a dovetail.

Stock Configuration & Condition: The stocks are two-piece smooth walnut with capped forend, straight grip, straight comb and steel crescent-style buttplate. The stocks have a few light nicks, dings, bruises, scuffs, and scratches but the wood is better than average. There is a newer coat of varnish to the wood but no evidence of sanding and still great wood-to-metal fit. There are no chips or cracks. The LOP measures 12 ¾” from the front of the trigger to the back of the crescent buttplate, which has turned brown with a moderate patina. Overall, the stocks are in about Good-Very Good condition as Antique.

Bore Condition: The bore is dark and the rifling is pronounced but worn. There is a lot of erosion in the bore.

Overall Condition: This rifle retains about 5% of its metal finish. The balance of the finish has turned to a medium dark brown and even patina.  This finish was apparently reapplied at one point in time as there are some dings under the finish and some evidence of metal prep, but the age is so natural that this was long ago and the metal was very good to begin with. Most would not notice this as a refinish. The screw heads are lightly worn. The markings are clear. Overall, this rifle rates in about Good – Very Good condition.

Our Assessment: “One of the most successful, and certainly one of the most famous Winchester rifles was the Winchester Model 1873, known as “The Gun that Won the West” for its predominant role in the hands of Western settlers. The Model 1873 had a steel frame that was much stronger than the brass framed Model 1866, allowing Winchester to develop a family of powerful new cartridges, with Colt usually producing Single Action Army revolvers in the same calibers shortly after they were developed…

The .32-20 Winchester, also known as the .32 WCF, was the first small-game lever-action cartridge that Winchester produced. It was initially introduced as a black-powder cartridge in 1882 for small game, varmint hunting, and deer. Colt produced a single-action revolver chambered for this cartridge a few years later. It has a good reputation for accuracy in rifles as well as the few handguns that have been chambered for it. Because of its low power, it destroys very little meat, making it a good hunting round for appropriately sized game.”

We know it is refinished, but it is not obvious and we still think this rifle deserves a place in your collection.