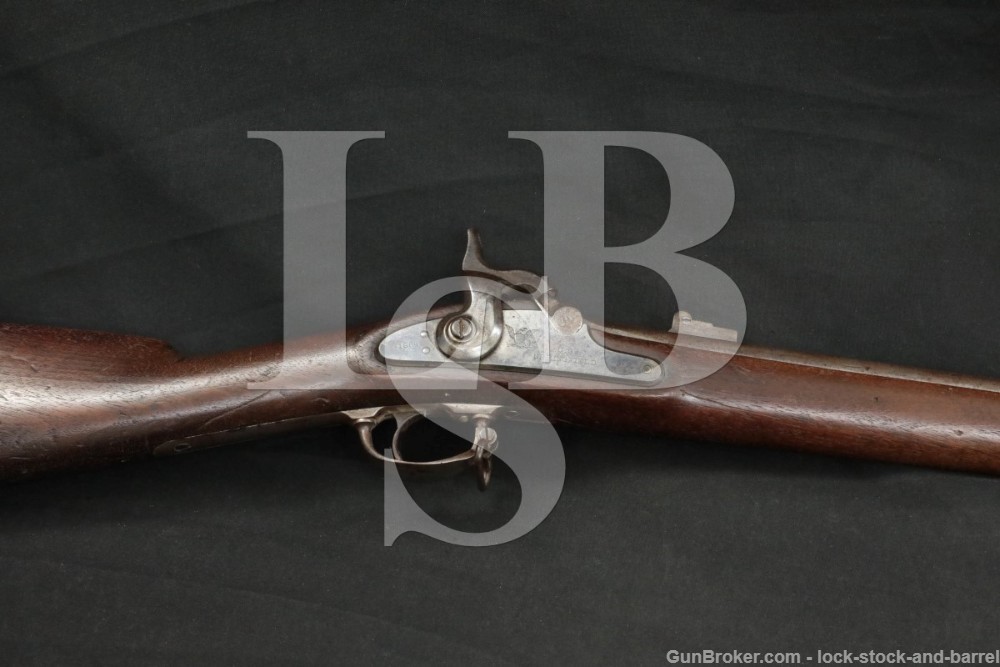 Sights/ optics:  The front site is blade fixed to the top of the barrel. The rear sight is a “U” notched battle sight which flips up to present two apertures and another notch at the top of the leaf.

Stock Configuration & Condition:  The stock is a smooth walnut with a long forend that runs to within about 3 1/8” of the muzzle, where it is capped with a steel nosecap. The underside of the nosecap and the forend are grooved for a ramrod, which is included. The forend is held with three barrel bands, and the center band and the front of the two-piece trigger guard are mounted with sling swivels. The buttstock has a straight grip and a carbine style curved steel buttplate. The  stock features a large number of light-moderate scrapes, scratches, nicks, drag lines and chips from service. More notably the belly of the stock has numerous deep compressions and some gouges. The LOP measures 13 ½” from the trigger to the buttplate. The buttplate shows scattered thick, dark patina and surface oxidation. The buttplate is in Good overall condition. The stocks rate Good-Very Good overall condition as an antique.

Bore Condition: The bore is dark. The rifling is light, but clearly visible. There is moderate erosion throughout the bore.

Overall Condition: This rifle retains about 25% of its metal finish. There is spotted light surface oxidation scattered throughout with surface erosion around the nipple. The barrel has a number of scratches and nicks, most notably near the nipple and on the left side of the barrel there is a deep scratch. The screw heads are tight and unmarred, although they are all weathered. The markings are clear except for the Great Seal of the United States on the  right side of the nipple. The ramrod is in Good condition and functions properly. Overall this rifle rates in about Good – Very Good considering its an antique.

Our Assessment: The Springfield Model 1863 Rifled Musket was a common site on American Civil War battlefields. The model 1861, which the model 1863 is considered a variant, was the most commonly used longarm of the Civil War, with both sides equipping their infantry with the battle proven firearm. This antique piece of Civil War History could be yours, good luck on your bid!