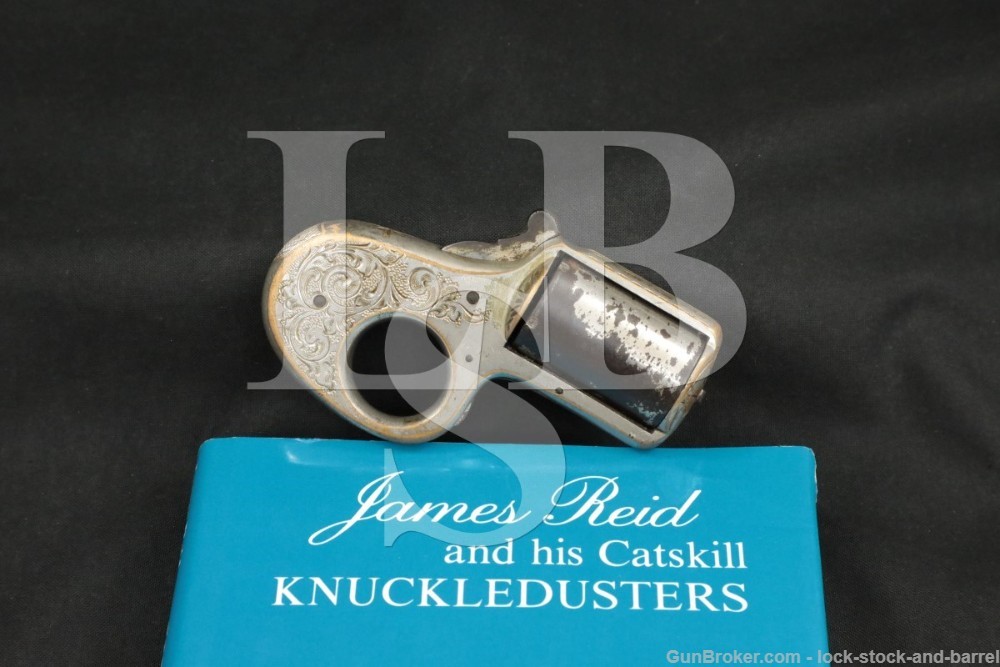 Markings: The left of the frame’s top strap is marked “MY FRIEND PATD. DEC. 26, 1865”, the frame and side plate have tasteful scroll engraving. The front of the frame at the grip has the serial number.

Sights / Optics: The top of the frame has a shallow “V” channel.

Stock Configuration & Condition: The frame acts as the grip with an arched backstrap and enclosed front strap with a finger hole.

Bore Condition: The cylinder chambers have a few spots of erosion and are dark.

Overall Condition: This handgun retains about 65% of its metal finish. The cylinder has finish loss and light scabbing. The frame has finsih loss that exposes areas of the brass frame, which has a nice natural patina. The finish loss is heaviest on the edges, front of the frame, and grip below the serial number. There are some little dings on the frame, most noticeable on the bottom of the grip and on the front. There are some swirl marks and little scratches. There is some discoloration behind the recoil shields. There are tool marks on the cylinder pin. The screw heads are lightly tooled. The markings are mostly clear though some of the patent date are faded. Overall, this handgun rates in about Good condition (mechanics).

Mechanics: The action does not function correctly, the hammer does not cock. We did not fire this handgun. As with all used firearms, a thorough cleaning may be necessary to meet your maintenance requirements.

Box, Paperwork & Accessories: Included with this firearm is the book “James Reid and his Catskill Knuckledusters” by Taylor G Bowen and information regarding its owner, Col. Carl Elliot Lundquist, including photos, partial resume, images of command patches, images of medals received, and a signed letter from family member Cynthia Lundquist.

Our Assessment: This firearm comes from the personal collection of Col. Carl Elliot Lundquist, whose distinguished military career spanned 30 years, starting with his 1927 graduation from West Point to his retirement as Colonel in 1957. In 1945, he commanded forces that would see to the ultimate destruction of the 6th SS Mountain Division—”Nord”—in the final months of World War II. He passed away in 1980. “Reid was no stranger to firearms. Immigrating to the states in 1857 at age 30, he worked mainly on small revolver designs. During the Civil War, he helped design and build guns for W.W. Marston and W. Irving Co. in New York City before striking out to the hills to form his own shop in Catskill. It was there on the day after Christmas in 1865 that he was granted a patent on his new device, he referred to in writing as ‘My Friend’.” Indeed, this would be a friendly carry for concealment and devastating effect. The frame doubles as a ring in which you could have knocked out a fellow poker player if insults were abound, it has a LOT of character, with a good amount of silver plating left. Everyone that walked by during the write up had to stop and take a gander. Less than 3,000 of this brass frame standard model .32 were made and this will be a great addition to your collection without taking up too much room. Please see our photos and good luck!