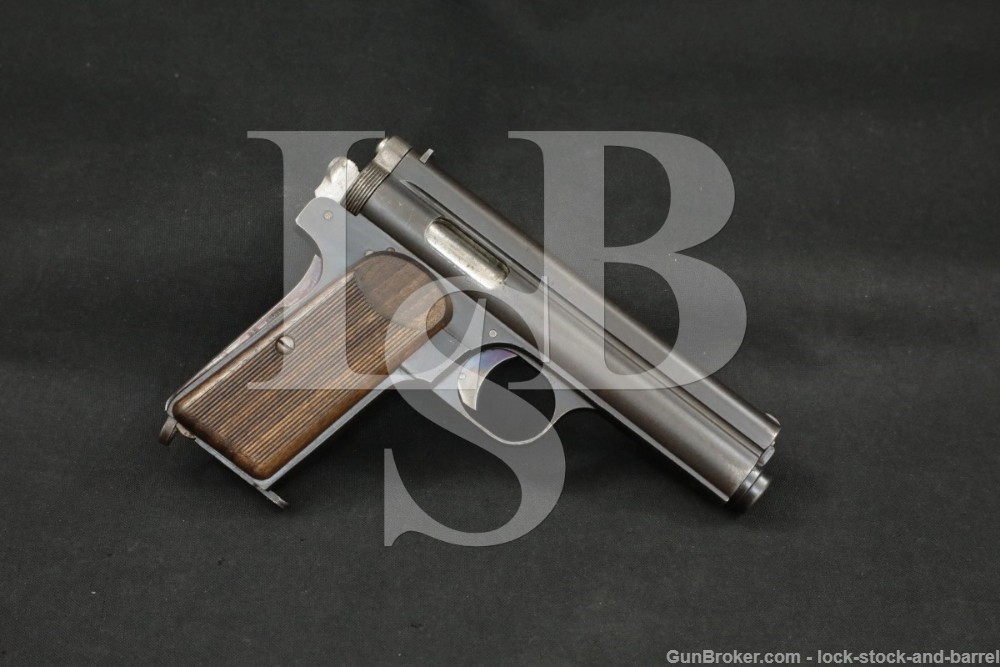 Sights / Optics: The front sight is a short rounded blade on the top of the frame. The rear sight is “V” notch dovetailed into the top rear of the frame.

Stock Configuration & Condition: The grips are serrated wood with “FS” in an oval at the tops of the grips. The grips have moderate light wear with some nicks, scuffs and scratches. The serrations are well defined. There are no chips or cracks. Overall, the grips are in Very Good condition.

Overall Condition: This handgun retains about 20% of its metal finish. Remaining finish is mottled with light wear and areas gone to a light patina. The sides of the trigger and grip safety retain some strong fire-blue. The bright finished hammer and bolt assembly has some scattered light surface oxidation. The frame has some scattered light nicks, scuffs, spots of light surface erosion and minor oxidation. The action shows operational wear. The screw head is tool marked with a strong slot. The pin heads range from unmarred to tool marked, but not peened. The markings are clear. Overall, this pistol is in about Good-plus condition.

Mechanics: The action functions correctly. This pistol has a grip safety but was not designed with a manual safety. We did not fire this handgun. As with all used firearms, a thorough cleaning may be necessary to meet your maintenance standards.

Box, Paperwork & Accessories: The pistol comes with a single 6-round magazine. The magazine shows operational wear, some minor surface oxidation, and some scratching and grind marks at the top. The feed lips show wear and damage, most notable at the left-rear. The spring is strong. Overall, the magazine is in Fair condition.

Our Assessment: The Frommer Stop pistol was designed by Rudolf Frommer and chambered in 7.65mm or 9mm Frommer, which are hotter versions of the .32 ACP and .380 ACP, respectively. The cartridges had the same dimensions, but were loaded just a little more stout. The pistol was first produced in 1912 and was adopted by the Hungarian element of the Austro-Hungarian Army. It had no model number, and the international word ‘Stop’ meant ‘to stop’ the target. During WW1, the Frommer Stop pistols were also sold to Germany, Bulgaria and Turkey. It was eventually given the designation ’19.M’ (Model 19) after it was adopted ‘again’ in 1919 by the new independent Hungarian Army. It subsequently became the official service pistol of the Hungarian army, police, gendarmerie and secret police. This pistol has an interesting design in that it uses two springs located over the barrel, one to control the barrel recoil and the other to control the movement of the bolt. This pistol was made in 1916, apparently for commercial. It is in about Good-plus overall condition, showing its age but also retaining a great bore and strong mechanics. Although this is a still a fairly common pistol in Europe, we don’t see that many in the United States. This fairly rare pistol should be of interest to collectors of Hungarian arms. It may cycle properly with standard .380 ACP loads, due to the hotter load of the 9mm Frommer, you may need to use heavier bullets or more stout cartridges for proper cycling. The pistol itself is in great mechanical shape, but there is some damage to the magazine’s left feed-lip, so you may need to keep an eye out for a replacement. Please see our photos and good luck!