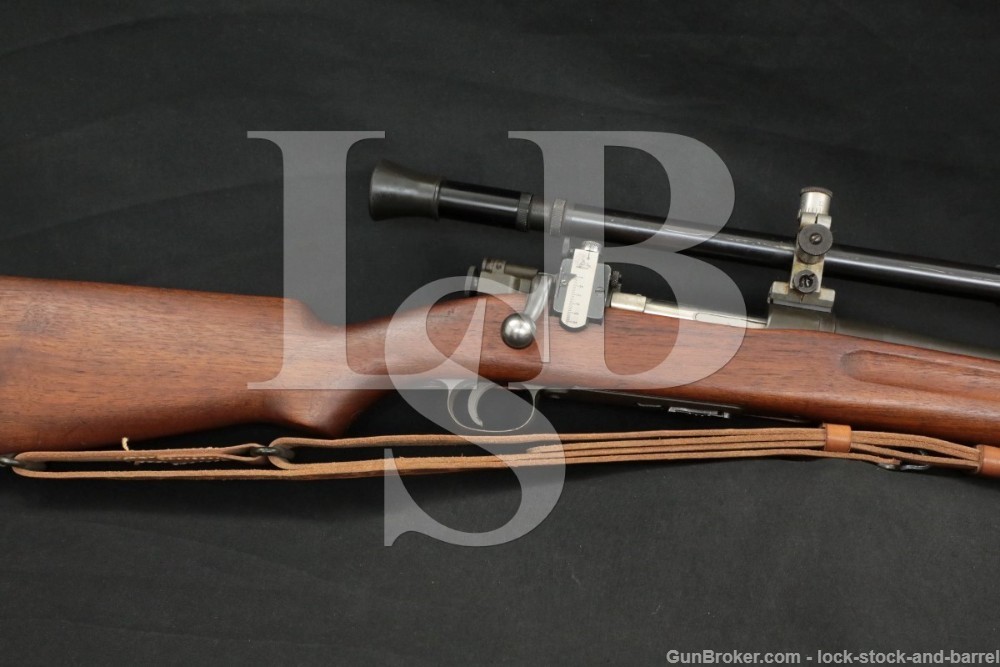 Sights / Optics: The front sight is a blade pinned in a serrated base dovetailed to a banded base at the muzzle. The right of the receiver bridge is drilled and tapped with a Lyman receiver sight installed, adjustable for windage and elevation. The rear of the barrel and the chamber ring are each drilled and tapped with male dovetail bases installed and rings holding an R.A. Litschert Spot-Shot 7/8″ 10x scope. The scope had a crosshair reticle, but the vertical hair has broken. The scope body has some scattered light wear and discoloration. The glass is fairly clear. Overall, the scope is in Fair condition.

Stock Configuration & Condition: The stock is one-piece walnut with semi-pistol grip, straight comb, checkered steel buttplate, finger-grooves, barrel band and sling swivels front and rear. The stock has some scattered nicks, dings, scuffs and scratches. There are no chips or cracks. The markings are clear and crisp. The LOP measures 13 1/8″ from the front of the trigger to the back of the buttplate. The plate has light wear around the edges, most notable at the heel, with well defined checkering. Overall, the stock is in about Fine condition.

Finish Originality: Original to the parts. The bolt appears to be a replacement, likely arsenal replaced.

Overall Condition: This rifle retains about 94% of its metal finish. The finish is thinning at some edges. The finish is generally strong throughout. There are a few light nicks and scuffs. The front sight base shows wear from the included cover. The action shows operational wear. The screw heads range from sharp to tool marked with strong slots. The markings are clear. Overall, this rifle is in Very Good-Fine condition.

Box, Paperwork& Accessories: The rifle comes with a single 5-round flush-fit magazine, a leather military-style sling and the installed scope as described. The magazine has operational wear and surface oxidation, intact feed lips and a strong spring, in about Good condition. The sling is marked on the inside “TOPGRAIN RIFLE SLING / FOR PROPER CARE USE NEATFOOT / OIL OR SADDLE SOAP. LEATHER / REQUIRES LUBRICATION!”. The sling shows minor wear, in Very Good-Fine condition.

Our Assessment: Starting in 1922, Springfield Armory was directed to work with the National Rifle Association (NRA) to develop a .22 caliber rifle that could be used by Office of the Director of Civilian Marksmanship (DCM) affiliated rifle clubs and by Reserve Officer Training Corps (ROTC) shooting teams. The result was the M1922 Rifle. There were a couple of different updates to the design, and each iteration also had some previous models converted to the new configuration. The final configuration & designation of the M1922 .22 caliber Rifle is the M2 and this is an example of the M2 configuration. This is an important and valuable U.S. rifle made by Springfield Armory. These rifles were designed to mimic the full size Springfield Model 1903’s, yet were chambered in .22 LR. The goal was to give soldiers and civilians trigger time on a Springfield 1903, without the expense of .30 Caliber ammo. Many M2s were used for competition shooting. The Springfield M2 has become a desired collector’s piece. This rare rifle will add nicely to your Military collection. For more information on the Model 1922 Trainers see pages 50 to 55 of Joe Poyer’s book, The M1903 Springfield Rifle and its Variations, 3rd Edition. Good luck!