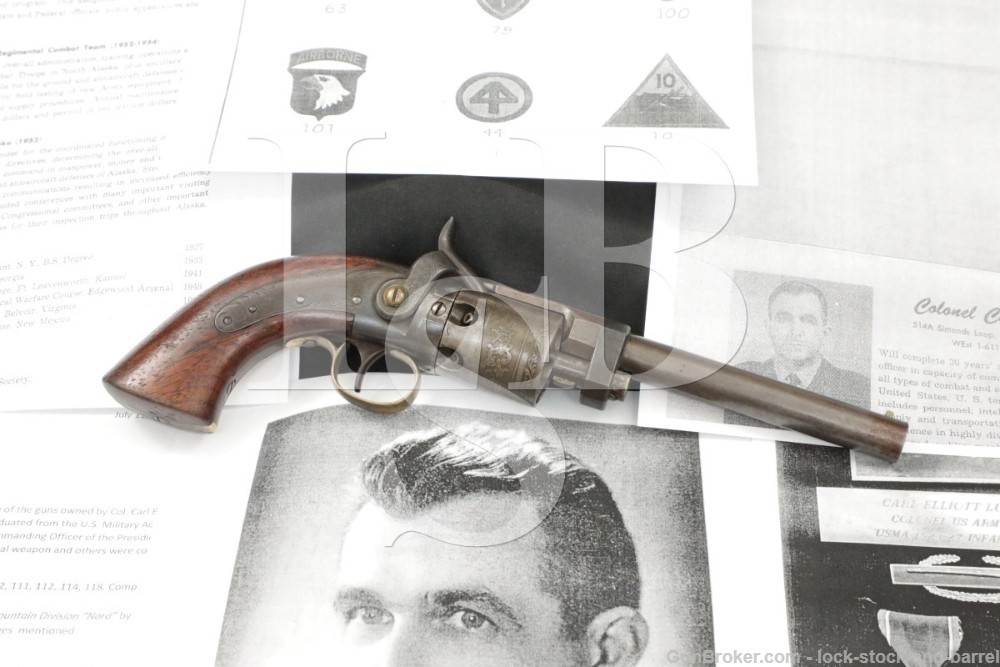 Markings: The front of the cylinder pin is marked with the serial number, “165”. The topstrap is marked “MASS. ARMS CO. / CHICOPEE FALLS”. The right side grip tang is marked “WESSON’S & LEVITT’S PATENT”. The cylinder features floriate pattern relief engraving along with various arms and weapons. The left side of the frame, hammer and grip tang all feature floriate engraving.

Sights/Optics: The front sight is a brass post fixed to the barrel. The rear sight is a v-notch that is integral to the topstrap.

Stock Configuration and Condition: The grips are two-piece smooth wood panels. There are scattered light nicks and dings throughout both panels with more notable dings at the top of the left panel and below the tang on the right panel. There is a brass colored reinforcement pin visible in the left grip panel. There are no chips or cracks. Overall, the grips rate in Very Good condition, as Antique.

Bore Condition: The bore is quite dark with well-defined rifling. There is light erosion near to the muzzle and light-to-moderate stubborn fouling throughout.

Overall Condition: This handgun retains about 10% of its original finish. The balance of the finish can be seen on the right side of the grip and grip tang, as well as the barrel lug. The barrel assembly has mostly gone to a light patina and there is a cluster of light nicks on the left side. The frame has mostly gone to a light patina and there are minor nicks scattered across its surfaces. There are intermittent spots of finish loss along the length of the grip frame and trigger assembly. Screws are heavily tool marked with unusable slots. Markings are generally clear. Overall, this revolver rates in Good-to-Very good condition, as Antique.

Mechanics: The action functions correctly. The nipples are not obstructed. The action is opened by pulling the hammer back slightly and turning the barrel and receiver assembly to the right. The assembly locks up with moderate play to the frame. We did not fire this pistol. As with all used firearms, thorough cleaning may be necessary to meet your maintenance requirements.

Box, Paperwork, and Accessories: This percussion revolver will ship with information regarding its prior owner, Col. Carl Elliot Lundquist, including photos, partial resume, images of command patches, images of medals received, and a signed letter from family member Cynthia Lundquist.

Our Assessment: This percussion pistol comes from the personal collection of Col. Carl Elliot Lundquist, whose distinguished military career spanned 30 years, starting with his 1927 graduation from West Point to his retirement as Colonel in 1957. In 1945, he commanded forces that would see to the ultimate destruction of the 6th SS Mountain Division—”Nord”—in the final months of World War II. He passed away in 1980. Designed by Daniel Leavitt and Edwin Wesson, this revolver was patented around 1839, and is a smaller version of their initial design that would see use in the Mexican-American War. Of note is the eventual shuttering of Leavitt and Wesson’s concern after a legal pummeling from Samuel Colt—these revolvers ceased manufacture just after the Civil War. This is a handsome piece that features relief engraving and a brass trigger assembly and grip frame. In overall Very Good condition as an Antique, this pistol is mechanically sound, but the bore will require some care and attention. Good luck and happy bidding!