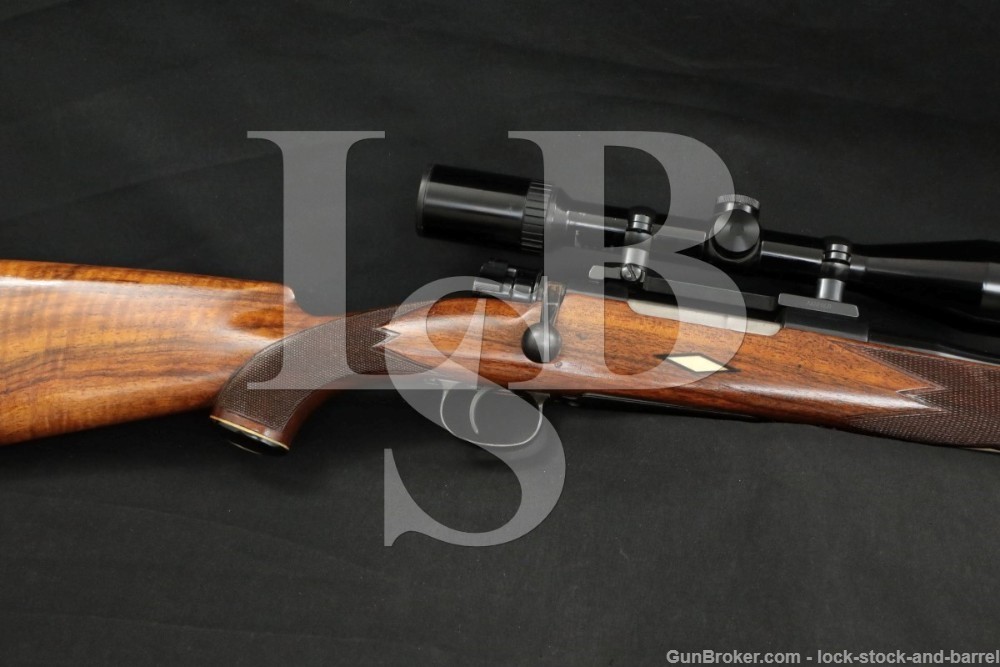 Sights / Optics: The front sight is a beaded blade in-line dovetailed to a serrated, ramped base fixed to the front of the barrel. The base is grooved for a hood, but none is present. The rear sight has one fixed and two folding “U”-notches dovetailed to a base fixed to the rear of the barrel. The receiver is drilled and tapped with a Leupold one-piece base and rings holding a Bausch & Lomb 4x scope with duplex reticle. The scope has light wear in the body with fairly clear glass, in Very Good-plus condition.

Stock Configuration & Condition: The stock is checkered walnut with a dark schnabel forend top with white spacer, inlaid white diamonds on each side below the receiver, on the bottom of the grip cap, and on the bottom of the forend, a straight comb, ventilated brown rubber Weisbaden Rod & Gun Club recoil pad and sling studs front and rear. The stock has two small filled holes on the right between the receiver and the trigger guard. There are a few scattered minor nicks and scuffs. The checkering is well defined. There are no chips or cracks. The LOP measures 14 1/8″ from the front of the trigger to the back of the recoil pad. The pad has light wear and discoloration, but is still fairly supple. Overall, the stock is in Very Good-plus condition.

Bore Condition: The bore is gray. The rifling is sharp where not interrupted by erosion. There is scattered light erosion and some minor pitting in the bore.

Overall Condition: This rifle retains about 90% of its metal finish. The balance is mostly in scattered minor surface oxidation. There are some scattered minor nicks and scuffs. The action shows operational wear and there is handling wear on the bolt handle. The floorplate has erosion under the finish. The screw heads range from sharp to tool marked with strong slots. The markings are clear. Overall, this rifle is in Very Good condition as customized.

Mechanics: The trigger releases the firing pin whether pulled back or when pushed forward. Otherwise, the action functions correctly. The two-stage trigger has a smooth, light takeup and a crisp break. We have not fired this rifle. As with all used firearms, a thorough cleaning may be necessary to meet your maintenance standards.

Our Assessment: This is a custom sporting rifle made from the receiver of a Mauser K98. It is still chambered for the 8mm Mauser cartridge but has been equipped with new sights, a new stock and a new finish. The work was performed by Kurt Jaeger, a German gunsmith who is himself interesting for his place in history. His father was a gunmaker who specialized in sporting guns, production of which nearly ceased during World War 2. Due to his mother’s Jewish heritage, Kurt’s other employment options were limited and he was eventually drafted into the German army. He was wounded, captured and spent some time in an American POW camp before being released. After the war he was finally allowed to marry and have a family, a right denied under the Nazi government, but the Jaegers soon found that communism was scarcely an improvement. Escaping from their home in Suhl, the Jaegers settled in Mainz where his nephew had earlier escaped. Working for the Weisbaden Rod and Gun Club for the American Air Force, Kurt was able to work engraving firearms and making custom sporting rifles for the local Air Force servicemen and, eventually, would be able to sell arms to German citizens, too. This example of his work is quite a beauty with its distinctive stock decorations. This will make an excellent display in a collection of custom sporting rifles and will make for an interesting conversation piece. Was it made for an American airman who brought it home after his tour in Germany was completed? Was it made for a German citizen who came to America? Please see our photos and good luck!