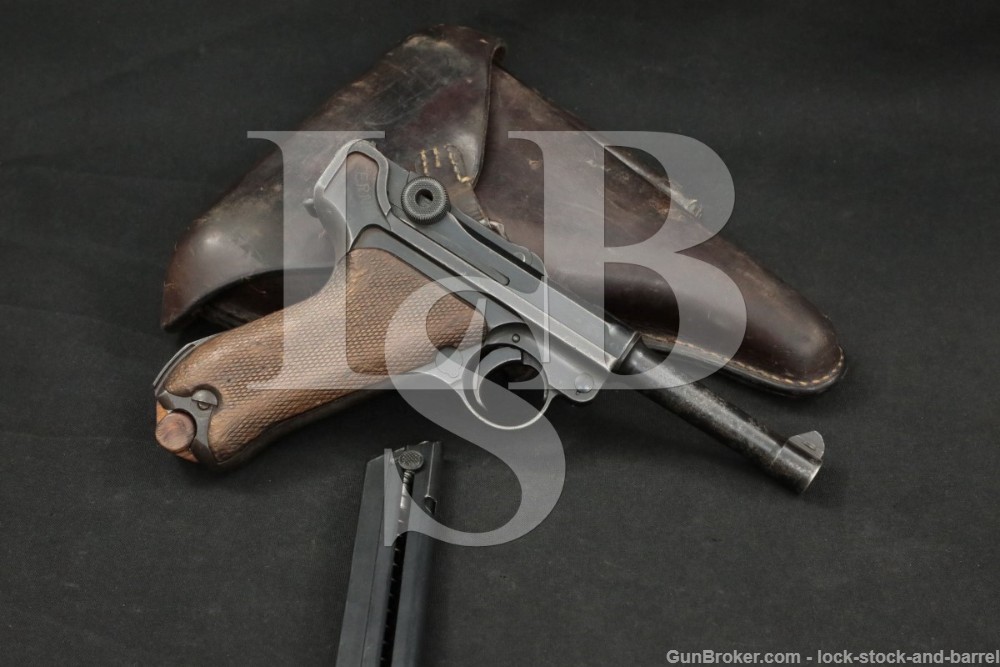 Stock Configuration & Condition: The grips are two-piece checkered walnut panels. The grips show moderate handling wear with scattered nicks, scuffs and scratches. The checkering is ranges from well defined to smoothed. There is a small chip-loss at the top-rear of the left panel at the safety lever. There are no cracks. Overall, the grips are in about Good condition.

Overall Condition: This pistol retains about 60% of its current metal finish. The finish is thinning at all edges. There is scattered finish loss, most appears to be from surface oxidation which has been scrubbed out. There is some other scattered surface oxidation and minor erosion. There are scattered nicks, scuffs and scratches. The action shows operational wear. The left grip screw is tool marked with a strong slot. The right grip screw has had half of its head break off, but the shank is still intact with strong threads. The markings are clear. Overall, this pistol is in about Good condition as refinished.

Box, Paperwork & Accessories: This pistol comes with a brown leather flap-holster and a total of two 8-round magazines. The holster is marked on the back “N. BURG / 15”, this marking is incomplete and appears to have been a 1915 N. Burghard marking. The holster shows scattered wear and discoloration with intact stitching, in Good-plus condition. One magazine has a wood floorplate. It is marked on the left with “6424” in electro-pencil, on the right with “19” in circle and “KK / 31”, and on the spine with “2798” in electro-pencil. This magazine shows light operational wear, some light surface oxidation, intact feed lips and a strong spring, in Good-Very Good condition. The other magazine has a black plastic floorplate. This magazine shows little in the way of wear, with intact feed lips and a strong spring, in Fine-Excellent condition.

Our Assessment: The Luger was adopted by the German Army in 1908 and was so reliable and well liked that it was still being made and issued to German troops well after the P38 was adopted by the army in 1938. The largest percentage of Lugers were made by DWM, which became Mauser in 1930. This is a DWM Luger pistol manufactured in 1917 which made it to Britain at some point. It is entirely possible that this pistol was picked up by a Tommy during the Great War and brought back home, it’s not clear if an American soldier would have to have a pistol proofed to take it home via England. It has survived the last century fairly well, in about Good condition, with about 60% of its new blued finish remaining. For fans of the Luger or WWI small arms, this DWM Luger will make a neat addition to a collection. Please see our photos and good luck!