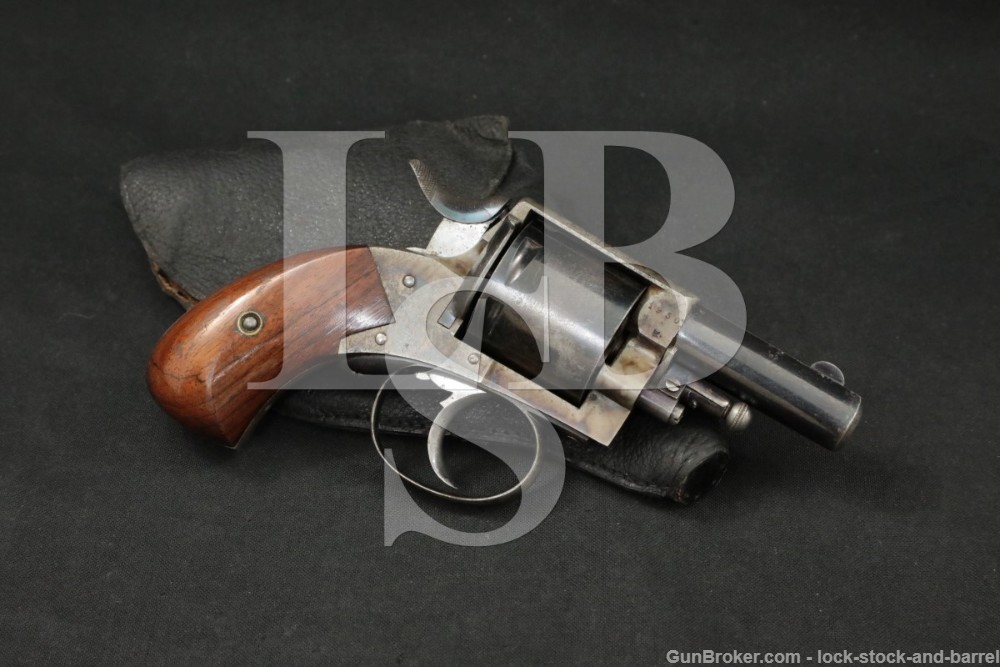 Sights / Optics: The front sight is a rounded blade fixed to the barrel. The rear sight is a groove in the topstrap.

Stock Configuration & Condition: The grips are two-piece smooth wood. The grips have light to moderate handling wear with scattered nicks and scratches. The lacquered finish is thinning to loss in some places. There are no major chips or cracks noticed. The grips fit tight to the frame. Overall, the grips are in about Very Good condition.

Overall Condition: This handgun retains about 90% of its current metal finish. There is some thinning to the blue on the barrel and cylinder from holster carry to the leading edges along with some freckling. Some of the case coloring is starting to turn grey. Most of the case color has been retained. The screw heads range from sharp to lightly tool marked with strong slots. Overall, this pistol is in about Fine condition for it’s age.

Box, Paperwork & Accessories: This revolver comes with a black leather period holster. The belt loop on the back is missing. About an inch of stitching has pulled where the trigger of the gun would be retained. Otherwise the stitching is tight. The leather is still pliable with no major rips. The pistol fits in the holster well. Overall the holster is in fair – good shape for the age
Our Assessment: The Bulldog revolver has connections both famous and infamous in American history, as detailed George Layman’s book “The British Bulldog Revolver: The Forgotten Gun that Really Won the West!” Probably the most infamous connection places it in the hands of Charles Guiteau, the man who shot President James Garfield in 1881.  Though the wounded President lived for several months under the rudimentary medical care of the time, he succumbed to the pair of bullet wounds almost three-months later. Even Gen. George Custer is rumored to have wielded a matched pair of ivory handled British Bulldog revolvers. With a rich history and multiple different models, collecting these revolvers has been growing in popularity. Overall complete and functioning in high condition, this would make a great addition in any arms collection.