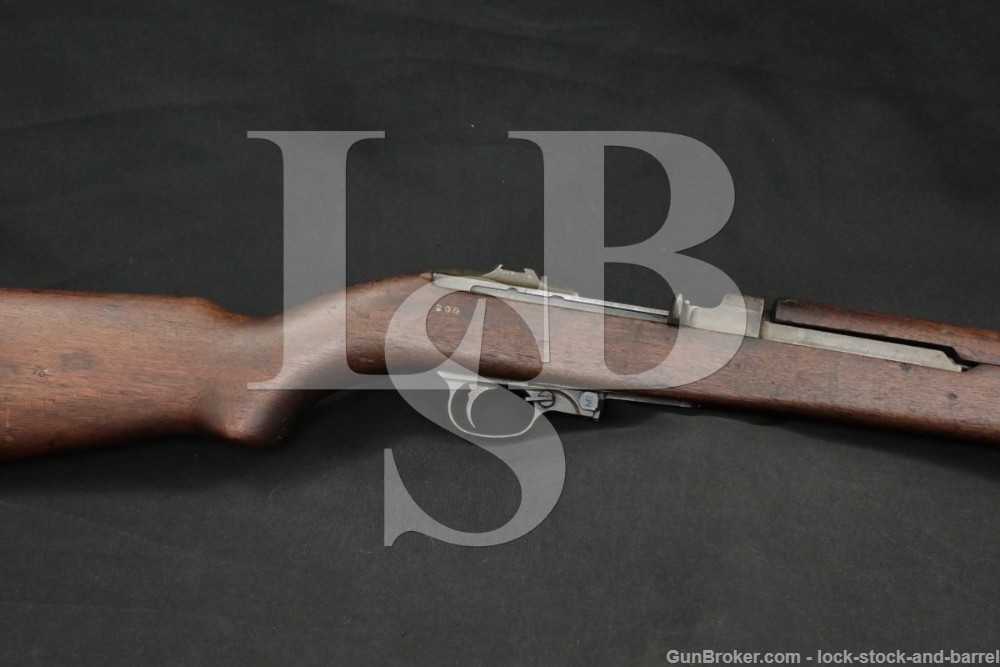 There are 2 Saginaw Gear manufacturers of M1 Carbines. Both were Divisions of General Motors. They were located in different cities. Saginaw Carbines made in the original Saginaw, Michigan factory are marked “S.G.” or “SG”. Saginaw Carbines made in the Grand Rapids, Michigan factory are marked “ S’G’ ”. Saginaw S’G’ guns were produced from the remnants of the failed Irwin-Pedersen factory in Grand Rapids. Saginaw took over production in Grand Rapids and marked the facilities M1 Carbines S’G’ to differentiate them from the ones produced at the original Saginaw plant.

Year of Manufacture: 1942 to 1944. No specific manufacture dates are listed due to a number of reasons explained on pages 24 to 26 of Scott Duff’s book, The M1 Carbine Owner’s Guide. Barrel Date: July 1943

Trigger group: Right side is marked with “INLAND”-(Inland).

The face of the grip is marked “P”.

Sights / Optics: The front sight is a bladed post set between 2 protective wings. There is no rear sight.

Stock Configuration & Condition: The two piece hardwood stock has a pistol grip, Type III barrel band with sling loop & bayonet lug, sling well, sling pass through, and metal buttplate. The buttplate shows scattered erosion. Where the recoil plate rests there is a small crack. The wood shows numerous scrapes, scratches. There is a scrape by the recoil plate. The LOP measures 13 inches from the front of the trigger to the back of the buttplate. The stock rates in about Good overall condition.

Bore Condition: The bore is semi bright. The rifling in the bore is sharp. There is light erosion, and infrequent minor pitting. The bore shows an M.E. of 2.

Overall Condition: This rifle retains about 75% of its metal finish. The metal shows light scrapes and small scratches. The right side of the receiver shows thinning from cycling. The rear sight dovetail is mostly bright with some light erosion. The markings on the barrel are faded. Overall, this rifle rates in about Very Good condition as refinished.

Our Assessment: This M1 Carbine has a Saginaw S.G. receiver. Saginaws are known for being made in the same plant as irwin-Pedersen receivers. Iriwn Pedersen was using two blocks of serial numbers at the same time. That confusion was compounded when Saginaw took over the plant. Whatever receivers Saginaw found acceptable were used, and scrapped the remainder. The gaps left by the scrapped Irwin receivers were being filled by Saginaw at some point. In doing so making it practically impossible to date the receivers. Overall a very interesting piece of history to add to a gun owner’s collection. Good luck!