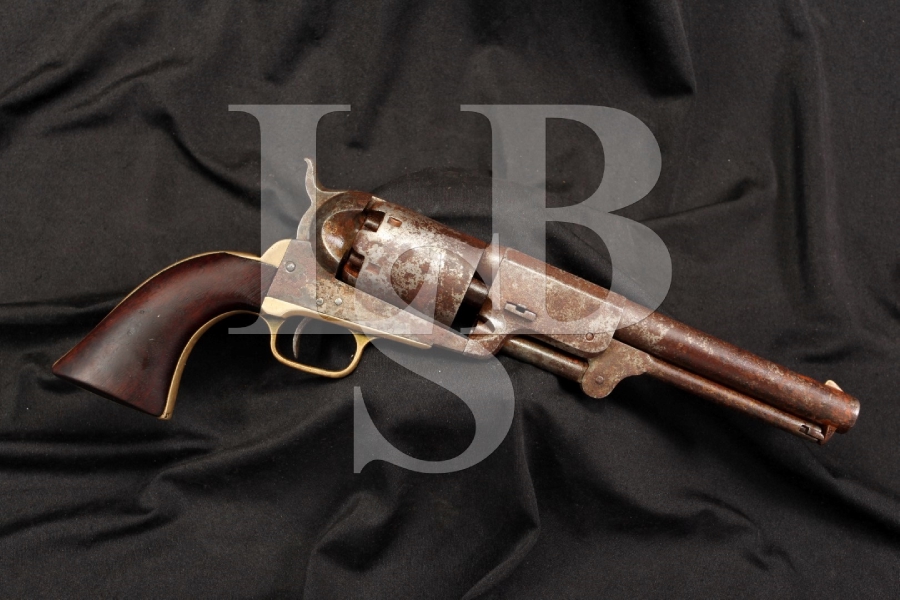 SOLD FOR: $3,500
Make: Colt
Model: Third Model Dragoon
Serial Number: 11455
Year of Manufacture: circa 1852
Caliber: .44 Caliber, Cap and Ball
Action Type: Single Action Percussion Revolver
Markings: The top of the barrel is marked “Address Sam’l Colt New York City”. The left side of the frame is marked “Colt’s / Patent / U.S.” (Note: Commercial pistols were not marked US). The serial number “11455” is found on the cylinder, grip frame, trigger guard and frame. The underside of the wedge shows a “1”. The cylinder scene is completely gone, which is not uncommon. The inspectors’ marks are as follows: “P” in front of the trigger guard, “C” on the left side of the trigger guard, “B” on the backstrap, “B” on the left side of the hammer and a “2” on the left side of the barrel assembly at the junction. The barrel assembly and ramrod assembly are not numbered.
Barrel Length: 7 ½”
Sights / Optics: The gun is mounted with notched hammer rear sight and a brass blade front sight.
Stock Configuration & Condition: The grips are original and nicely aged. They are slightly undersized, though this is likely from age and they have not recently been sanded. There are no cracks or large losses.
Type of Finish: Brass grip frame, blue/case colored frame and barrel, now gray & rust.
Finish Originality: The finish is completely gone and there is evidence of a cleaning under the existing rust.
Bore Condition: The rifling is visible the entire length, and acceptable. There is pitting and visible erosion.
Overall Condition: This gun retains about 0% of its metal finish. The balance of the finish shows old cleaned metal, under a somewhat mottled layer of surface rust. The cylinder looks a bit more “white” and has likely been cleaned a bit heavier than the remainder of the pistol and a bit more recently. There is scattered pitting, primarily on the frame sides and the cylinder. Our belief is that this gun was returned and everything forward of the cylinder was replaced. The cleaning was very likely accomplished at this time and this was long enough ago for natural and matching rust to form on both halves of the gun. Evidence of the cleaning can be seen as faint tooling marks under the patina, most noticeable on the loading mechanism. The brass is almost bright from handling (not polishing) at areas of high contact, and shows a nice darker patina elsewhere with crystalline checking. The screw heads are serviceable and not terribly deformed. The markings are clear and visible. As is seen with most Dragoons, the cylinder scene is now gone and the only visible mark on the cylinder are the serial numbers, which were struck much deeper than the scene. Overall, this gun rates in about Very Good condition. Again, everything behind the cylinder and including the cylinder is original and the barrel assembly & rod have likely been replaced.

Mechanics: The action functions as designed, the springs are strong and the lock-up is good. This is a mechanically sound pistol.

Our Assessment: The Colt Model 1848 Percussion Army Revolver is a .44 caliber revolver designed by Samuel Colt for the U.S. Army’s Mounted Rifles, also known as “Dragoons”. This revolver followed the Colt Walker and addressed numerous problems encountered with the Walker (namely the ram rod retainer.) Although it was introduced after the Mexican-American War, it became popular among civilians during the 1850s and ’60s, and was also used during the American Civil War. Few revolvers or handguns in general have the cache of such a legendary and imposing firearm, and no Colt collection, Civil War collection or American Handgun collection is complete without a REAL Colt Dragoon. We firmly believe that this is a real Dragoon, with all Colt produced parts that was returned for a rebuild (replaced front end) at the Colt factory some time before the turn of the century. Some of the metal was cleaned, but there is a lot of natural rust and age now on the gun.

Famous users included Joaquin Murietta, the California bandit, Charley Parkhurst, California teamster, Union general George B McClellan, probably Harriet Tubman of the Underground Railroad, and fictionally Mattie Ross in the 1969 version of “True Grit”. Parkhurst, while driving freight, was confronted by two bandits whom she dispatched with the Colt Holster Pistol. According to Harper’s Weekly, James Butler (Wild Bill) Hickock arrived in Springfield, Missouri carrying a Dragoon. In addition to the inherent interest, value and collectability in a true Colt Dragoon, this one is US marked… Bid accordingly.