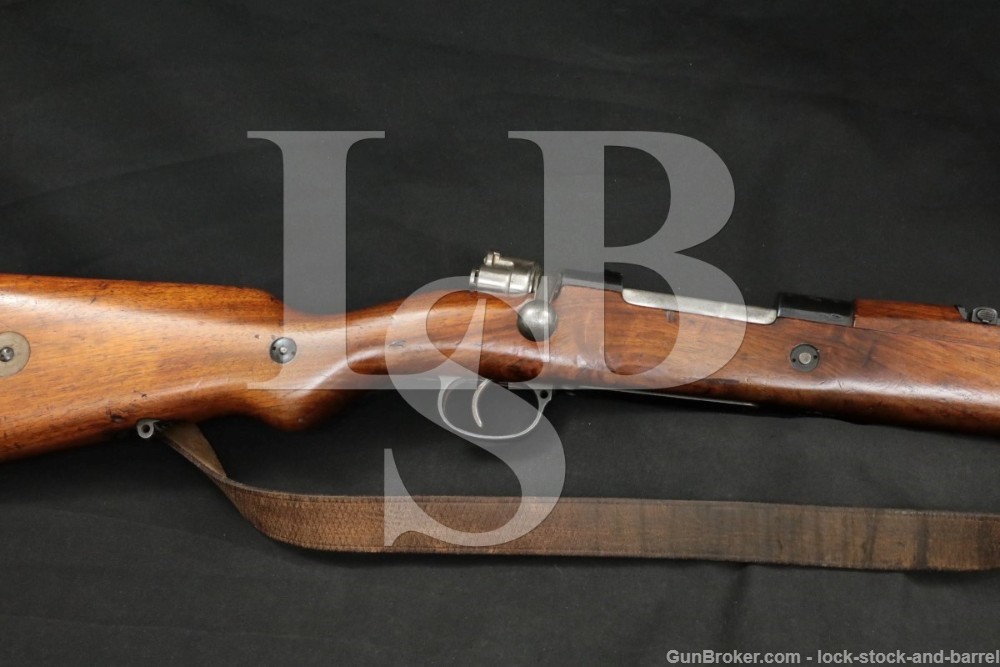 Sights / Optics: The front sight is an inverted “V” post set between 2 protective ears. The rear sight is a “V” notched blade attached to a sliding escalator that is marked from “1-14”.

Stock Configuration & Condition: The buttplate shows scrapes, small scratches and oxidation. The wood shows numerous scrapes, scratches and compression marks. The LOP measures 13 inches from the front of the trigger to the back of the buttplate. The stock rates in about Very Good overall condition.

Overall Condition: This rifle retains about 92% of its metal finish. The metal shows scrapes, small scratches and areas of thinning. The thinned portions of the metal show discoloration from oxidation. The bottom metal shows a small amount of light surface erosion. The screw heads show light use. The markings are deep. Overall, this rifle rates in about Very Good condition.

Box, Paperwork & Accessories: The rifle comes with an unmarked leather sling. It shows scrapes, discoloration and surface creasing. Overall it is in about Very Good condition.

Our Assessment: This Chilean 1935 “Carabineros” Carbine was purchased from Mauser Oberndorf during the mid 1930’s. It was intended for use by the elite corps of “Carabineros”. The rifle looks good and has great markings on the metal which include matching numbers, “crossed rifles” and the “MAUSER” banner logo. The rifle even has deep markings on the stock which include the Chilean crest. This Model 1935 Carbine is ideal for the Mauser collector.
For more info see pages 79-80 of Robert Ball’s book, Mauser Military Rifles of the World- Fifth Edition.