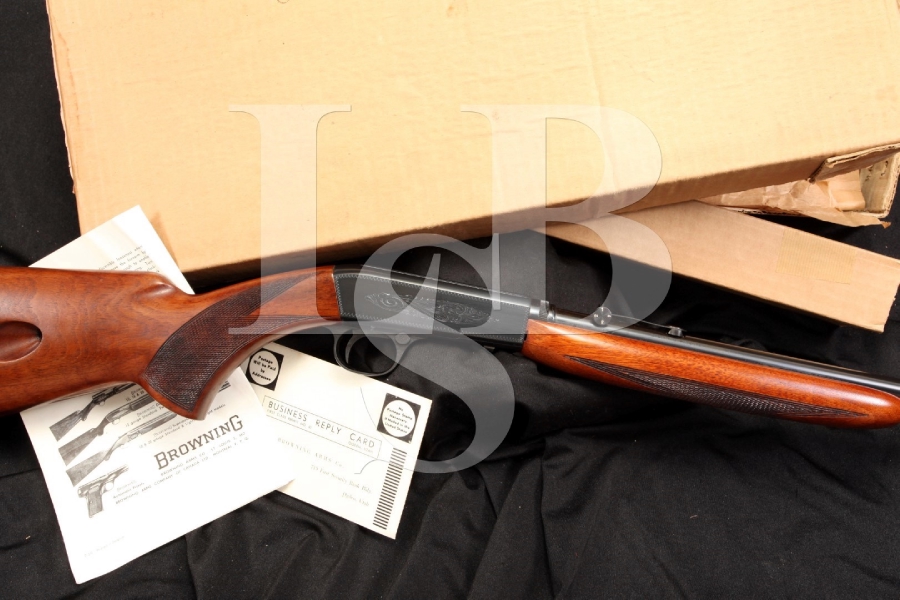 SOLD FOR: $1,605
Make: Browning
Model: .22 Takedown Auto Rifle
Serial Number: T59150
Year of Manufacture: 1959
Caliber: .22 Long Rifle
Action Type: Semi-Automatic Takedown Rifle with Tubular Magazine
Markings: The top of the barrel is marked “Browning Arms Company St. Louis Mo & Montreal P.Q. / Made In Belgium” The left side of the barrel reads. “.22 Long Rifle” The right side of the barrel reads Browning Patents. The face of the receiver is marked “T59150 / T9150. The ring around the magazine tube on the butt of the stock Is marked “T60795”. The receiver is scroll and border engraved. The underside of the receiver is marked with three proofs.
Barrel Length: about 19 ¼”
Sights / Optics: The front sight is a dovetailed Patridge style blade and the rear sight is a wheel sight adjustable for elevation. There are grooves on top of the receiver for adding a scope.
Stock Configuration & Condition: The stocks are checkered walnut with a gloss finish, pistol grip and slightly curved metal buttplate. The magazine tube rod is mounted in the center of the buttplate, with a dished-out hole on the right side of the buttstock to allow partial filling of the magazine tube. The forend is a semi-beavertail that is slimmed at the rear to mate with the receiver. The buttstock shows faint storage markings from being wrapped in wax paper in the box. It appears that these buff out with a soft cloth and a bit of pressure. There are only the faintest handling marks. The forend looks like new. The LOP measures 13 7/8” from the front of the trigger to the back of the steel buttplate. The stocks rate in about Excellent overall condition.
Type of Finish: Blue
Finish Originality: All Original
Bore Condition: The bore is Bright and the rifling is Sharp. There is No erosion.
Overall Condition: This rifle retains about 98% of its metal finish. The balance of the finish shows two very tiny spots of pinprick surface erosion in the bottom left corner and top left corner of the border engraving of the receiver. We had to use a magnifying loupe to spot them. The screw heads are sharp. The markings are clear. Overall, this rifle rates in about Excellent condition.
Mechanics: The action functions correctly. We have not fired this rifle.
Box, Paperwork & Accessories: This rifle comes in what we believe to be its original box with end label that correctly describes the serial number of the ring on the back of the buttplate. The tag is reddish in color and reads “ONE BROWNING SEMI AUTOMATIC RIFLE MADE IN BELGIUM 22 LONG RIFLE. No. T60795 GRADE I”. Inside the box are a box for the barrel and a box for the stock as well as the original wax paper. The owner’s manual and registration card are also included. The manual has a few creases from bending. The bottom of the box has a puncture and the edges of the box have wear and some fraying.
Our Assessment: We were a bit confused by this particular rifle because it is in impeccable condition however, the serial number on the receiver denotes that it was from 1959 but the ring on the butt of the stock has a different serial number from 1960. The number on the ring matches that of the box. We believe that this may have been a factory error because there is no apparent reason for that small part to be changed on such a nice rifle. Since these are consecutive years, the factory may have been using up the remaining 1959 receivers in the early part of 1960. We are not sure. This is a beautiful rifle with practically no marks on any of the metal or wood. The bore is great. This would be a fine addition to your collection and they are exceptionally fun to shoot.