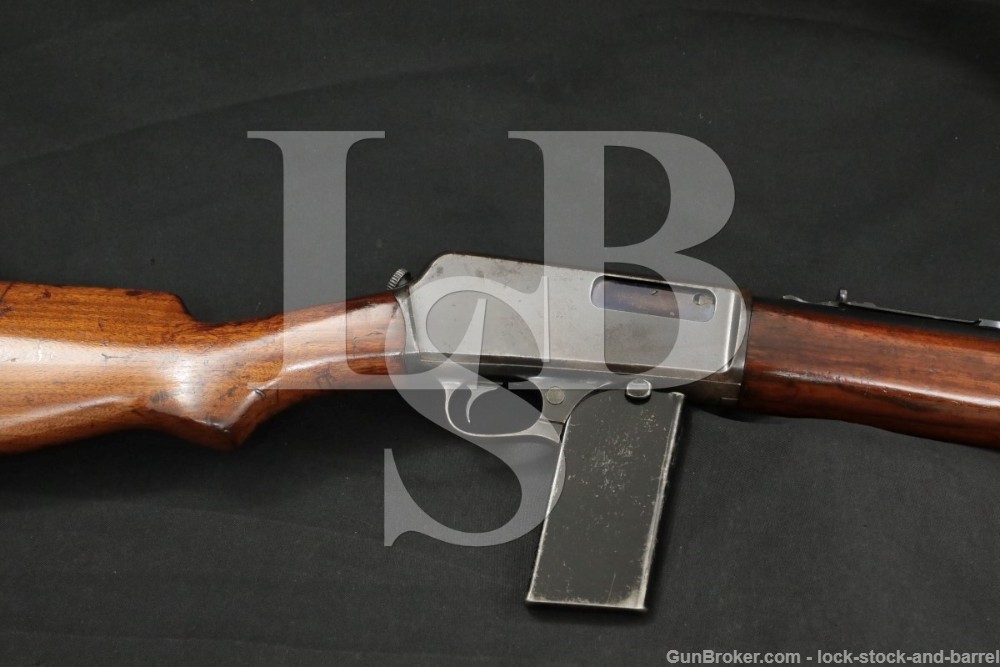 Sights / Optics: The front sight is a dovetail set blade. The rear sight is a flat top, notched leaf, on a slide-step elevator.

Stock Configuration & Condition: The stocks are smooth walnut, with a pistol grip, shotgun style hard rubber plate and a steel forend cap/band that is integral with the bolt handle. The wood is free of cracks and still shows about 50% original finish. There are many bruises and dings, areas of oil darkening and finish loss, but the wood is still attractive. The wood-to-metal fit is great. The LOP measures 13 7/8” from the front of the trigger to the back of the black hard rubber butt plate; the plate has moderate rub wear through much of the details along with small surfaces losses, in Good condition. The stocks rate in about Very Good overall condition.

Bore Condition: The bore is almost bright and the rifling is barely worn. There is only a couple tiny patches of etching in the bore. The bore is an 8 out of 10.

Overall Condition: This rifle retains about 60% of its metal finish. The surfaces have handling rub wear and scattered scratches. There is thinning at the edges, tangs and flats. The frame’s finish is beginning to turn a light brown patina, with scattered erosion. The barrel shows more finish than the frame, which is expected as a result of the finish fragility and metal hardness. There is even bright finish remaining on the bolt. This rifle was definitely used, but it is still better than most we see of this model. The screw heads are only lightly worn. The markings are clear. Overall, this rifle rates in about Very Good condition.

Box, Paperwork & Accessories: One 10-Round magazine in Poor condition is provided. This magazine is marked “.351 CAL.-” and is functional though pitted and painted over.

Our Assessment: “Though 1907 and its cartridge may not have set the hunting world on fire, both rifle and cartridge gained a following among police and even a few militaries. Some were converted to fire full auto. The rifle saw service in World War I as an auxiliary arm for British and French pilots. Russia bought a small quantity during World War I as well. In the U.S., early recon pilots looking for Pancho Villa kept a 1907 handy in their cockpits. The rifle enjoyed considerable popularity among law enforcement in the 1930s but was eventually overtaken by the Thompson Submachine Gun. It also was quite popular for prison guard use, eventually coming from the factory with a threaded muzzle to accept a flash suppressor.”

The 1905, 1907, 1910 series of guns are interesting and historically important as they tell the Browning/Remington/Winchester breakup story. It was because Winchester had to circumvent the Browning Patented Remington Model 8 (that their lawyers had patented) that make this rifle a bit awkward… There should be a bolt handle and there should be a much better bolt lock, but those were patented by Browning…

We often sell these as fun guns to shoot, that takedown and still pack a .357 Magnum sized punch… But we think this one will find its way to you collectors before it finds its way to the range. The finish is definitely better than average and this gun has the rarely seen threaded barrel and muzzle protector. We bet this one was in a PD or Jail rack for years, now it should be in yours.