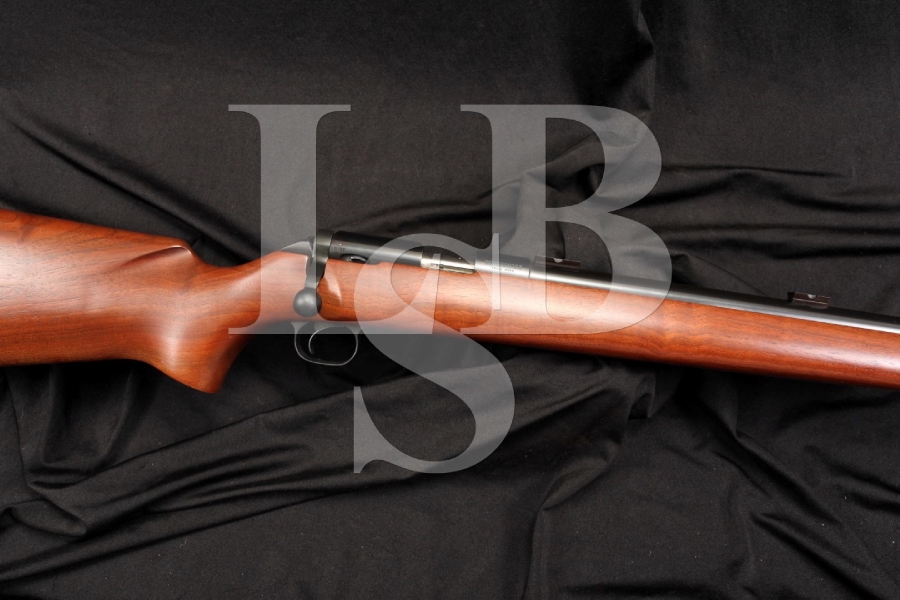 SOLD FOR: $2,425
Make: Winchester
Model: 52-E Target
Serial Number: E125359
Year of Manufacture: 1978
Caliber: .22 Long Rifle (.22 Short and Long Rifle will chamber and shoot but you won’t yield the same accuracy.)
Action Type: Single Shot Bolt Action
Markings: The left side of the barrel is marked “Winchester MODEL 52 -22 L. Rifle / Made In New Haven, Conn. U.S.A. Winchester Proof Steel”. The top of the barrel and the chamber ring are marked with a circled “WP” proof. The left side of the receiver is marked “E125359”. The right side of the receiver is marked “Winchester / Trademark”.
Barrel Length: The round barrel is 28” in length and 0.881” in diameter at the muzzle. It has a deeply recessed crown.
Sights / Optics: The front of the barrel and the receiver are drilled, tapped and filled for iron sights. The rear of the barrel has scope blocks mounted.
Stock Configuration & Condition: The stock is one piece oiled walnut with a full pistol grip and flat shotgun style black plastic serrated buttplate with white and black spacers. The forend is a wide beavertail with a long (about 13 ½”) accessory rail inlet into its underside. The left side of the buttstock shows spots of finish loss and scuff marks in the finish and one or two small compression marks. The right side of the stock shows only very light handling marks. The underside of the stock at the toe shows a compression mark and light scratches in the finish. Besides light handling marks, the forend shows a compression mark on the left bottom edge just above the front of the trigger guard. The wood to metal fit is good, and there are no notable cracks or chips. This appears to be the Model D Marksman stock. The heel of the buttstock is actually about ¼” taller than the front of the comb, and about ¼” below the line formed by the top edge of the forend. The butt measures about 5 ½” from heel to toe. The LOP measures 13 7/16” from the front of the trigger to the back of the buttplate, which shows minor marks and is in Excellent condition. The stock rates in about Fine to Excellent overall condition.
Type of Finish: Blue
Finish Originality: All Original
Bore Condition: The bore is bright and the rifling is sharp. There is no erosion.
Overall Condition: This rifle retains about 99% of its metal finish. The barrel and receiver show a very few very light handling marks. The bolt handle shows thinning on its edges. The trigger guard shows tiny compression marks on its left edge and the flat section at the front of the trigger guard shows tiny marks around the rear screw. The front screw of the trigger guard shows thinning. The sight hole filling screws are all sharp except the front screw, and it is sharp but shows light marks from a screwdriver. The markings are clear. Overall, this rifle rates in about Excellent condition.
Mechanics: The action functions correctly. We have not fired this rifle.
Box, Paperwork & Accessories: None
Our Assessment: From Wikipedia: “The Winchester Model 52 was a bolt-action .22-caliber target rifle introduced by the Winchester Repeating Arms Company in 1920. For many years it was the premier small-bore match rifle in the United States, if not the world. Known as the “King of the .22’s,” the Model 52 has been called by Winchester historian Herbert Houze “perfection in design” . . . The Model 52E was a D-model with the receiver milled to accept an aluminum bedding block/recoil lug (only installed on the International Match, 3-Position and Prone versions), and which had, for the first time on a 52 target model, telescope mounting holes drilled and tapped in the forward receiver. The loading feed geometry was also slightly tweaked from that of the Style D. Winchester catalogs of the time listed all Model 52s as either 52Ds or as “International” models; arguably the “52E” never existed as a separate Style, but arose from the E-prefixed serial numbers mandated by the Gun Control Act of 1968 . . . The Model 52 was finally discontinued in the 1980 because it was costly to manufacture and its popularity had lost way to expensive European rifles.” This is a Winchester Model 52-E rimfire bolt action single shot target rifle that was made in 1978. It appears to have a Model D Marksman stock which free-floated the barrel. The stock shows a few marks, but the rest of the gun is pristine. There were only about 652 of these rifles manufactured over a 10 year period and as a result, they have great collector value. The great condition of this one is sure to catch the eye of the Winchester collectors out there.