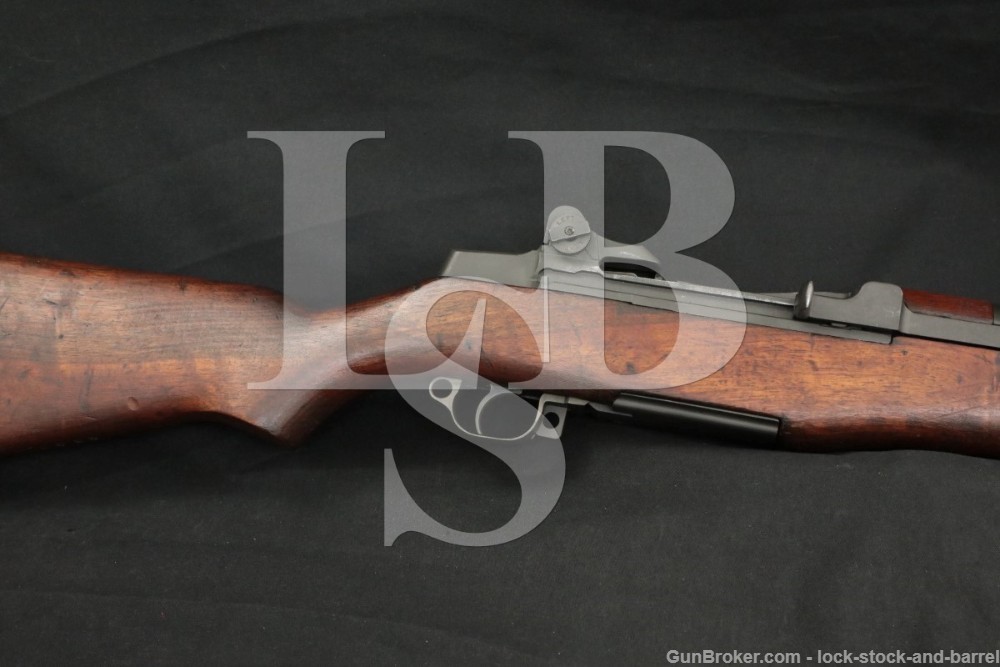 Rear Sight: “LEFT” and arrow twice on the windage knob. The elevation knob is marked “UP” and “DOWN” each with arrow, “BATTLE” and “RANGE” with a triangle.

Stock Configuration & Condition: The belly of the stock is marked “4340”, the left is marked “PB” and there is a Danish sticker in the barrel channel with serial “PB 4340” marked on it.

The three piece hardwood stock has a pistol grip, metal nose caps, two sling loops, stacking loop and a metal buttplate with hinged metal door for storage in the buttstock (there is nothing in the storage compartment). The stocks have several scattered nicks, scuffs and scratches. There are some dings at the front sling swivel. There is scattered discoloration from age and oil. There are no chips or cracks. The LOP measures 13 inches from the front of the trigger to the back of the buttplate. The plate shows wear in the checkering, but most wear has been finished over. The stock rates in about Very Good overall condition.

Finish Originality: Original Receiver & Barrel. Many of the small parts were refinished when the rifle was built.

Bore Condition: The bore is mostly bright with sharp rifling. There is infrequent minor erosion in the bore, mostly at the muzzle-end. Our gauges show an ME of 2.25 and a TE of 2.5.

Overall Condition: This rifle retains about 96% of its metal finish. There are some scattered light nicks and scuffs. The action shows minor operational wear. The gas cylinder appears to be commercial manufacture, it has a notably lighter color than other components. Most markings are clear, the serial marking on the receiver is a little shallow and small. Overall, this rifle is in about Very Good-Fine condition, and would easily rate Fine but for the wear in the stock.

Our Assessment: As Patton stated his views on the M1 Garand he said, “In my opinion, the M1 Rifle is the greatest battle implement ever devised”. Every gun owner in America should own a M1 Garand and this one is no exception. If you’re in the market to go to the range to shoot .30-06 this is your rifle, if you’re looking for a nice centerpiece for the fireplace this can be your gun.  This rifle also has parts from Breda, Beretta, Winchester, Springfield, and a Danish stock, making it great for those wanting certain parts or who are trying to finish a historical set. Overall, this is a good rifle for any proud gun owner to have in their collection. Good luck and happy bidding!