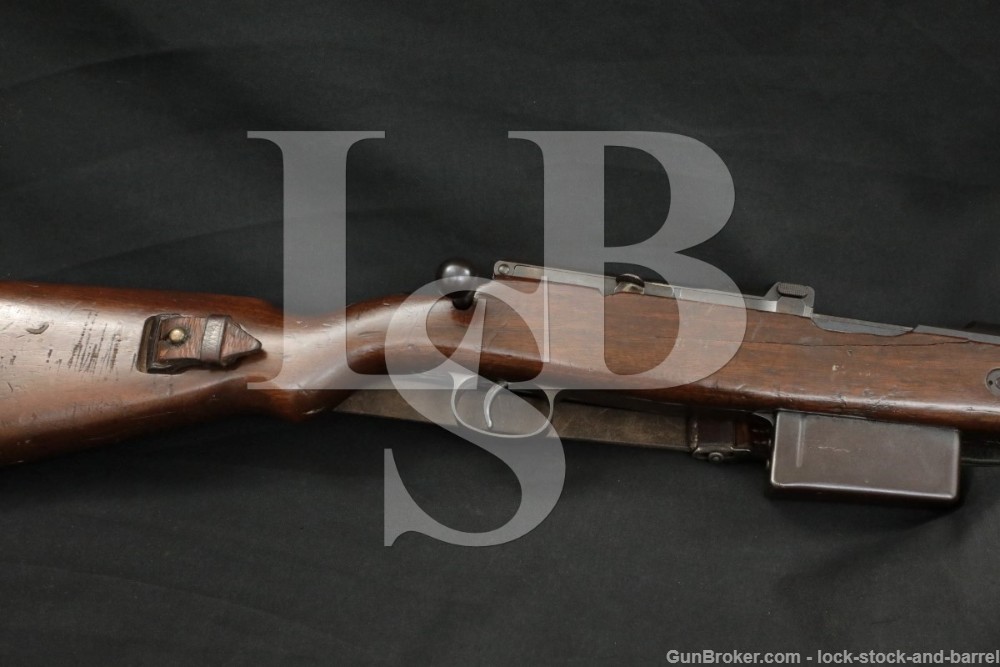 Markings: The top of the chamber ring is marked with an eagle over “135” waffenamt (Mauser) and “G.41(M) / 1942”. The nosepiece of the gas trap system, the chamber portion of the gas trap on the front sight base, the left of each barrel band, the top-left of the barrel extension, the rear sight base, arm and slider, the top-rear of the receiver cover, the trigger guard assembly, the magazine body, the inside of the handguard, and the belly of the stock are each marked “10678”. The bolt handle and the cap on the rear of the bolt handle assembly are each marked “10984”. The bar piston is marked “10154”. The bolt and bolt carrier are each marked “10510”. Most of these serial-marked parts are also marked with eagle over “135” waffenamts. The safety switch is marked “S” and “F”. The grip has an eagle over “WaA135” waffenamt. The buttplate is marked “brg”.

Sights / Optics: The front sight is a blade dovetailed to a serrated, ramped base integral to the chamber portion of the gas trap assembly. The rear sight is a “U” notched sliding escalator marked from “1 – 12” mounted to the barrel extension behind the handguard.

Stock Configuration & Condition: The stocks are two-piece smooth walnut with bayonet lug, cleaning rod, two barrel bands with a sling ring on the rear band, handguard, semi-pistol grip, straight comb, steel cup-style buttplate and a sling pass-through in the buttstock. The stock has some scattered nicks, dings, scuffs and scratches. Some of these marks have disturbed portions of the surface wood, most are oiled over. There is a notable compression at the right-rear of the bolt channel behind the receiver from the bolt handle. There is a small chip-loss at the barrel band spring on the right. There is a long crack in the right of the stock, extending down and back from the top edge by the front of the receiver. The LOP measures 13 1/4″ from the front of the trigger to the back of the buttplate. The buttplate has mostly gone to a light patina with some scattered spots of light surface oxidation, light nicks and scratches, and wear at the heel. Overall, the stocks are in about Very Good condition.

Overall Condition: This rifle retains about 50% of its metal finish. Strongest finish is in the receiver and bolt assembly. The front half of the receiver cover has strong finish, but there is a fairly well-defined line behind which the cover has gone to a light patina. There are dents in the top of the receiver cover, but they do not interfere with the cycling of the bolt. Other surfaces show some wear and areas going to a light patina. There are scattered tool marks on the gas trap assembly and there is a piece missing from the rear of the gas trap assembly. The action shows operational wear. There are a few other scattered light nicks, scuffs and scratches. The screw heads show tool use with strong slots. The markings are generally clear, some of the inspection marks are poorly struck. Overall, this rifle is in about Good condition (see Mechanics).

Mechanics: The action functions correctly when operated manually, but there is a piece missing from the rear of the gas trap assembly which may affect function for semi-automatic firing. We did not fire this rifle. As with all used firearms, a thorough cleaning may be necessary to meet your maintenance requirements.

Box, Paperwork & Accessories: The rifle comes with a brown leather sling, showing light-moderate wear and some discoloration, in about Good condition.

Our Assessment: In 1939, Nazi Germany began the process of developing a semi-automatic infantry rifle for the Wehrmacht. The only companies to develop prototypes which came to production were Walther and Mauser, with their rifles designated the G41(W) and G41(M), respectively. The requirements that the German government included a similar size and weight to the K98, no moving parts on the top, the rifle must have a supplemental bolt-action system in the case of the semi-automatic action failing, and there was a proscription of holes drilled in the barrels (precluding most gas-operated systems). Mauser faithfully fulfilled all of the government’s requests in their rifle, while Walther basically ignored any requirements they felt were unnecessary or inconvenient. Consequently, Mauser’s rifle was exactly what the government had asked for, and Walther’s rifle was the better gun. It is for this reason that production of the G41(M) was quite limited, while Walther’s design would become the G43 and would go on to see widespread production in the latter half of WWII. While orders were placed and production plans made for 70,000 of the G41(M) rifles, it appears that fewer than 20,000 were produced in total before the project was scrapped. Surviving examples are quite rare, it is presumed that most of the production was destroyed or otherwise lost during the fighting retreat against the Red Army. This example will make a fine addition to a WWII small arms collection, and isn’t a rifle you’ll see too often. Please see our photos and good luck!