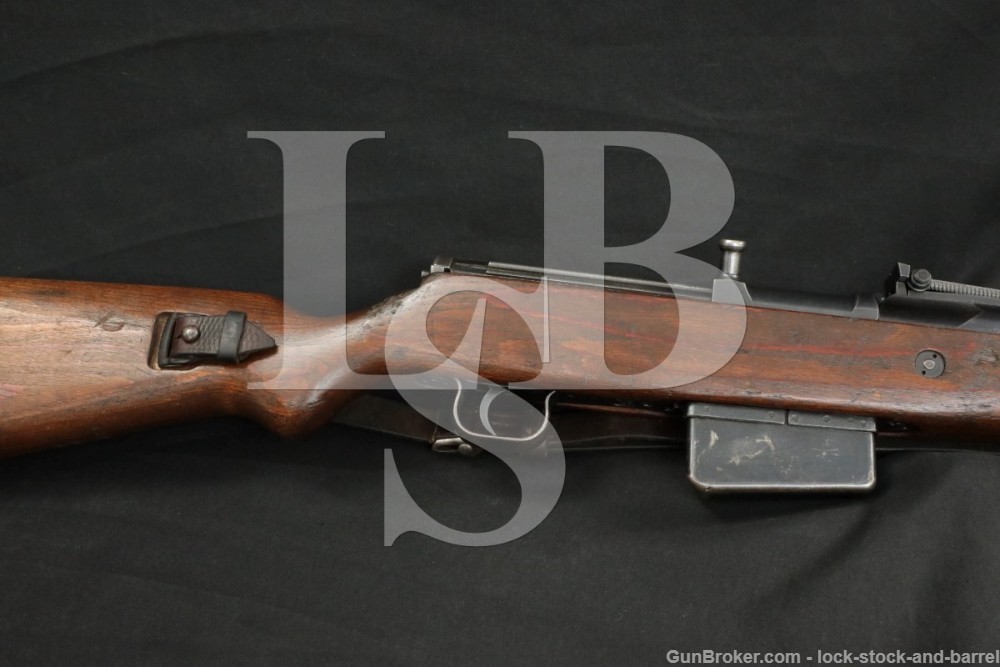 Sights / Optics: The front sight is a hooded post set atop a raised base. The rear sight is a “U” notched sliding elevator marked from “1-12”.

Stock Configuration & Condition: The stock is laminate wood with a synthetic upper handguard, pistol grip, sling well with pass through, metal through bolt, nose cap, barrel band with sling loop, cleaning rod and a metal buttplate. The stock has some scattered nicks, dings, scuffs and scratches. Some of these have disturbed portions of the surface wood and many are oiled over. There is some minor loss on the edges of the cleaning rod slot. There are no cracks. The LOP measures 13 3/8” from the front of the trigger to the back of the buttplate. The buttplate has scattered wear and light erosion. The stock rates in about Very Good-Fine overall condition.

Bore Condition: The bore is gray with well defined rifling. There is scattered light erosion in the bore, most in the grooves, with infrequent minor pitting.

Overall Condition: This rifle retains about 60% of its metal finish. There is thinning at all edges. The gas trap assembly shows scattered wear and minor surface oxidation. The barrel underneath the gas trap and handguard has strong finish. The receiver and bolt carrier have generally strong finish. The receiver cover has mostly worn to white from operation. The bottom metal has generally strong finish with some wear on the trigger guard. There are scattered nicks, scratches and scuffs. The action shows operational wear. The screw heads show use. The markings are deep. Overall, this rifle rates in about Very God condition.

Box, Paperwork& Accessories: The rifle comes with a brown leather sling that shows wear. It is in about Very Good condition.

Our Assessment: This Gewehr 41 by Berliner-Luebecker Maschinenfabrik is a great looking piece of history. It has great markings, nearly all matching with just the gas-trap body being replaced, and a good looking stock. Even as they were starting the Second World War, Germany knew that autoloading infantry rifles were the future of modern war. The Wehrmacht issued a specification to various manufacturers, and Mauser and Walther submitted prototypes that were very similar. However, some restrictions were placed upon the design. There were to be no holes for tapping gas for the loading mechanism bored into the barrel, the rifles were not to have any moving parts on the surface, and in case the auto-loading mechanism failed, a bolt action was to be included. While Mauser was careful to follow all of these restrictions to the letter, Walther chose instead to only follow the restriction on the gas system, but their submission proved superior to Mauser’s. G41(W) rifles were produced at two factories, namely Walther at Zella Mehlis, and Berlin Luebecker. Walther guns bear the ac code, and WaA359 inspection proofs, while BLM guns bear the duv code with WaA214 inspection proofs. This BLM example is in Very Good condition, showing fairly light wear for a service rifle on the losing end of the war. It will make a great addition to a WWII rifle collection. Please see our photos and good luck!