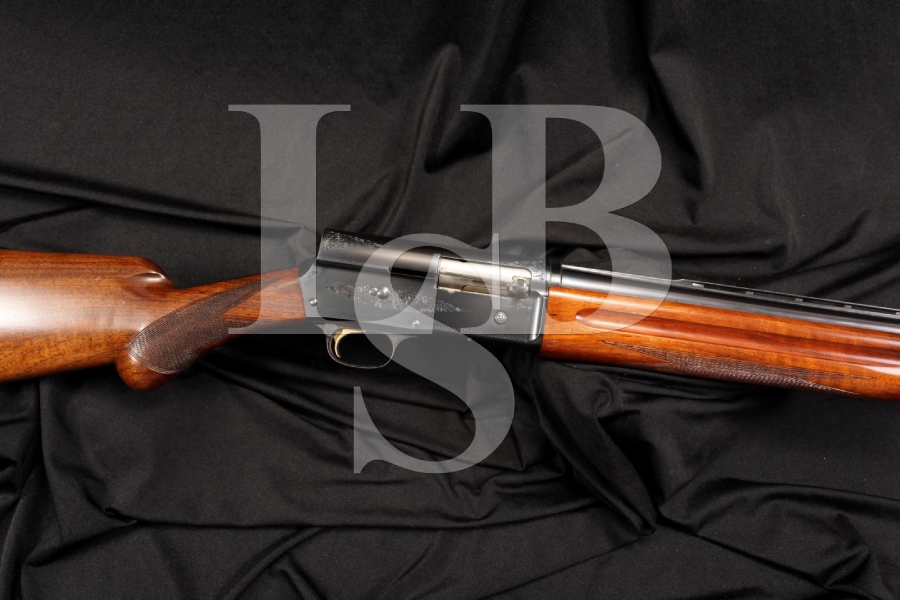 SOLD FOR: $1,275
Make: Browning
Model: Sweet Sixteen
Serial Number: S49563
Year of Manufacture: 1958-1969
Gauge: 16 Gauge, 2 ¾” Shells
Action Type: Semi-Automatic with Tubular Magazine
Markings: The left side of the receiver is marked “SWEET SIXTEEN / BROWNING” with a small portrait of John Browning and some scroll and border engraving. The underside of the receiver is marked S49563. The left side of the barrel is marked “*** SPECIAL STEEL 16 GAUGE-SHELLS 2 ¾ 1KG030” followed by many proof markings. The right side of the barrel is marked “MADE IN BELGIUM”. The entire receiver is scroll and border engraved.
Barrel Length: about 25 ½”
Choke: Cylinder
Sights / Optics: This shotgun is mounted with a white bead front sight on a serrated ventilated rib.
Stock Configuration & Condition: The stocks are glossy checkered hardwood. The LOP measures 14” from the front of the trigger to the back of the original “Automatic Browning” buttplate. There are a few marks which seem to have removed the lacquer from the buttstock and forend. There are various compression marks throughout. There are no cracks or losses. The stocks rate in about Very Good overall condition.
Type of Finish: Blue
Finish Originality: All Original
Bore Condition: The bore is Bright with some plastic fouling. There is no erosion.
Overall Condition: This shotgun retains about 93% of its metal finish. The balance of the finish shows light patches of pinprick surface erosion. There is a spot where the finish has worn off on the top left side of the receiver. There are light handling marks on the barrel. The screw heads are. The markings are Clear. Overall, this shotgun rates in about Fine condition.
Mechanics: The action functions correctly. We have not fired this shotgun.
Box, Paperwork & Accessories: None
Our Assessment: The Browning Auto-5 was the first mass-produced semi-automatic shotgun. Designed by John Browning in 1898 and patented in 1900, it was produced continually for almost 100 years by several makers with production ending in 1998. It features a distinctive high rear end, earning it the nickname “Humpback”. The top of the action goes straight back on a level with the barrel before cutting down sharply towards the buttstock. This distinctive feature makes it easy to identify A-5s from a distance. A-5s were produced in a variety of gauges, with 12 and 20 predominating; 16 gauge such as this one (not produced between 1976 and 1987) models were also available. The gun saw military service worldwide between World War I and the Vietnam War. This is a unique looking shotgun that would be a blast at the range. These guns were durable enough for service during the toughest wars and should be a reliable and trusty shotgun that can be passed down to the next generation.