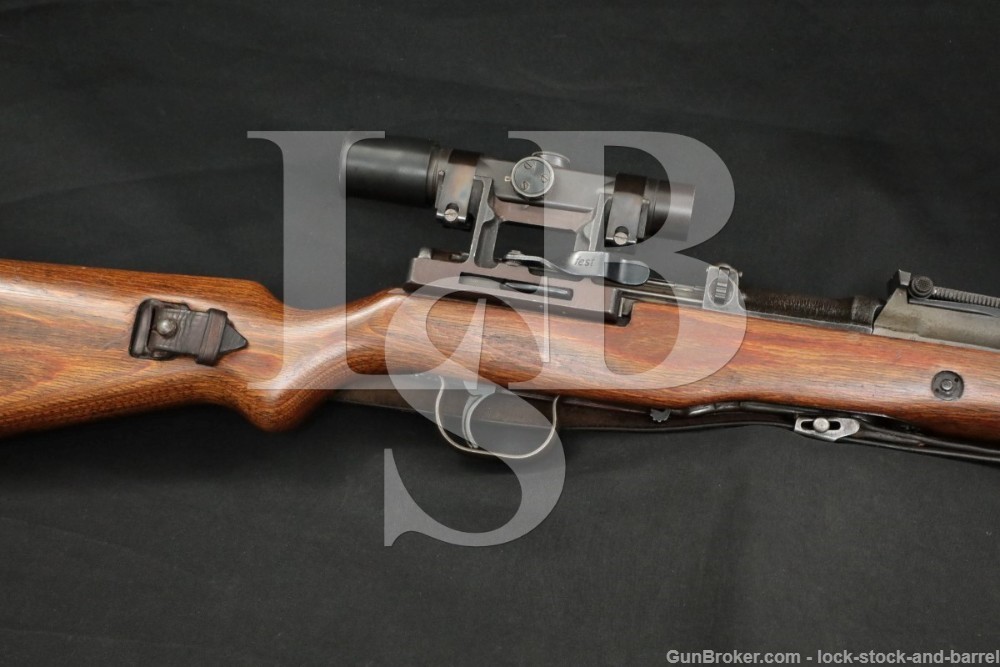 Sights / Optics: The front sight is a bladed post set atop a raised base and under a removable protective hood. The rear sight is a “U” notched sliding escalator marked from “1 – 12”. There is an integral rail on the right of the receiver for a scope mount. The installed mount is marked “fest” and “lose” on the locking bar and at the bottom-right with an eagle over “214” waffenamt. Mounted is a ZF4 scope with post reticle. The left of the scope is marked “Gw ZF 4”, “dow”, with a blue triangle and “15376”. The scope’s lenses are a little cloudy and the body shows light wear and discoloration, in about Very Good condition.

Stock Configuration & Condition: The stocks are two-piece laminate wood with a pistol grip, sling well, sling pass through, metal nosecap with sling loop, through bolt, metal cleaning rod and a metal buttplate with a hinged metal door for storage in the butt. The buttplate shows scratches and discoloration from oxidation. The top mounting screw has stripped the hole in the wood, but the screw still has strong threads. The wood shows some scattered light scrapes, scratches & compression marks. There is some minor cracking at the handguard vents on the left of the stock. The LOP measures 13 1/2 inches from the front of the trigger to the back of the buttplate. The stock rates in about Very Good-plus overall condition.

Bore Condition: The lands are mostly bright, the grooves are gray. The rifling is well defined. There is scattered light erosion in the bore, mostly in the grooves.

Overall Condition: This rifle retains about 85% of its metal finish. The finish is thinning at most edges. The exposed portion of the barrel has a few spots of light surface oxidation and a couple of nicks at the outside edge of the muzzle. The front sight base shows scattered scrapes and tool marks at its mounting pin. The receiver and bolt show the rough finish of late-war production. There is infrequent minor surface oxidation. The receiver, bolt and bottom metal have some light nicks, scratches and scuffs. The action shows operational wear. The markings range from clear to poorly struck or worn. The screw heads are tool marked with strong slots. Overall, this rifle is in about Very Good condition.

Box, Paperwork & Accessories: The rifle comes with the installed scope as described and a brown leather sling. The sling shows scattered wear and discoloration, in about Good condition. Please note, no magazine is included with this rifle.

Our Assessment: This G43 was made by Walther in 1944. It has been equipped with a field-replacement scope mount (not serial-marked) as well as a Czech produced ZF-4 scope. While it is unlikely that these are original to the rifle, they are of wartime production and this makes for a nice sniper-configuration example of the G43. This Nazi marked G43 has nice markings on the metal, though the receiver and bolt carrier show the rough finish of late-war production. The G43 has a much-improved gas system (borrowed from the Russians) and is much more reliable than its predecessor the G41. This is a rifle that will add to any collection, especially a WWII collection. Please see our photos and good luck!