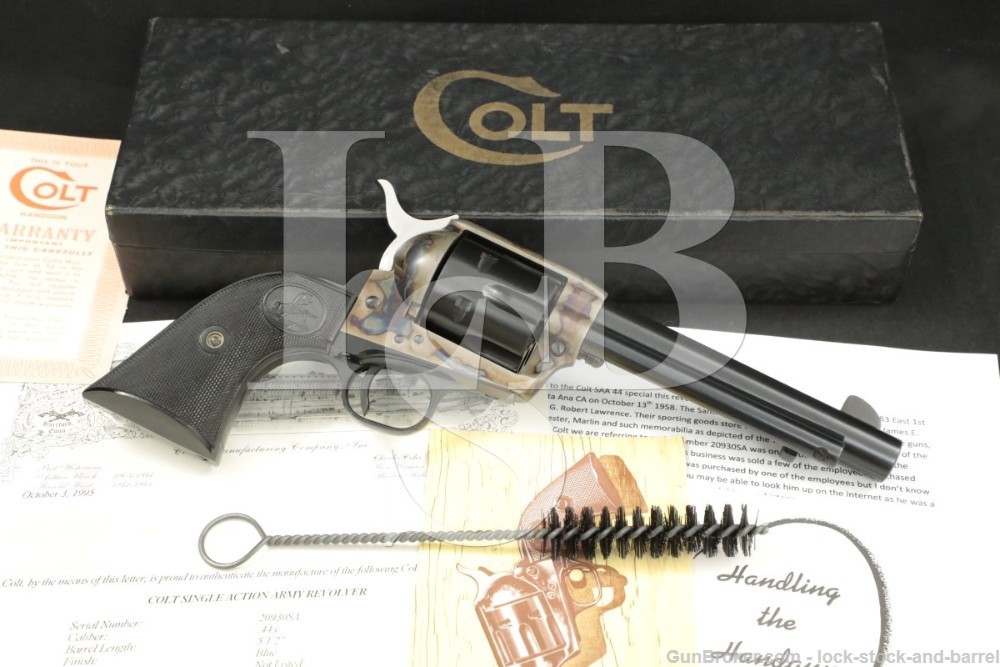 Stock Configuration & Condition: The grips are two-piece checkered black hard rubber panels with rampant colt in oval at the top of each panel. The right panel has some minor scuffing along the bottom edge. Otherwise, there are only light handling marks. The checkering is sharp. There is good detail in the colts. There are no chips or cracks. Overall, the grips are in Excellent condition.

Overall Condition: This revolver retains about 98% of its metal finish. There are a few tiny marks in front of the trigger guard and a light scratch on the bottom of the trigger guard. The side faces of the hammer show minor operational wear and there is just a hint of wear in the cylinder’s stop-notches and their lead-in grooves. The screw heads are sharp, a couple of the grip frame screws have evidence of tool use, but the slots remain sharp. The markings are clear. Overall, this revolver is in Excellent condition.

Box, Paperwork & Accessories: This revolver comes in a Colt black cardboard hinged-lid box with green interior, model-matching label, and “20930” hand-written on the bottom. Inside the box is tissue paper, wax paper, nylon-bristle bore brush and an assortment of factory paperwork including manual. The box has minor storage wear, in about Fine-plus condition. A Colt Historian letter is included, stating that this revolver shipped in its current configuration on October 13, 1958 to the Santa Ana Gunroom in Santa Ana, California as the only gun of its type in the shipment. A letter is also included from the consignor asserting that this revolver was on display at the Santa Ana Gunroom’s museum, and was purchased by an employee when the store closed.

Our Assessment: The Colt Single Action Army is perhaps the quintessential old west handgun, produced for more than a century, serving the U.S. Army as its sidearm from 1873 into the first world war and captivating audiences on the silver screen. The SAA was discontinued by Colt as it tooled up to provide for the WWII war effort, and it was thought by Colt that the design was obsolete, swing-out cylinder revolvers had been around for half a century and autoloaders were gaining in popularity. Then, with the advent of television and western programs such as Hopalong Cassidy, The Lone Ranger, The Cisco Kid, and The Gene Autry Show, American interest in the guns that won the west was reborn. In 1956, Colt reintroduced the Single Action Army, this new production run now referred to as the 2nd Generation SAA’s. In 1958, the .44 Special cartridge would be introduced for the 2nd Gen SAA, though it was not a particularly common chambering. Just over 2,000 SAAs would be chambered for the cartridge between 1958 and 1966, after which it was available only for special-order. Interestingly, the very earliest .44 Special cylinders were marked the same as other cartridges, starting with the frame’s assembly number and then with the last three digits of the serial number. Soon, however, the .44 Special cylinders would be marked with all five digits of the revolver’s serial number, a practice which would not be used on other models until the 3rd Generation. This revolver is in fantastic condition, appearing to have spent more time in its included original box than out. That, or, it was on display! This revolver comes with a Colt Archives letter detailing the original configuration and shipping date to the Santa Ana Gunroom in California. Founded by noted firearms collector and author James Serven as well as G. Robert Lawrence, the Santa Ana Gunroom featured a small Western firearms museum. According to the consignor, this revolver was displayed in that museum until the Santa Ana Gunroom closed down, then being purchased by one of their employees. This would certainly comport with both the documented history of this revolver as well as its extraordinary condition. This would make a great addition to a Colt collection as one of the earliest of the second generation .44 Specials, and would be especially nice for a Southern California collector who remembers the old Gunroom. Please see our photos and good luck!