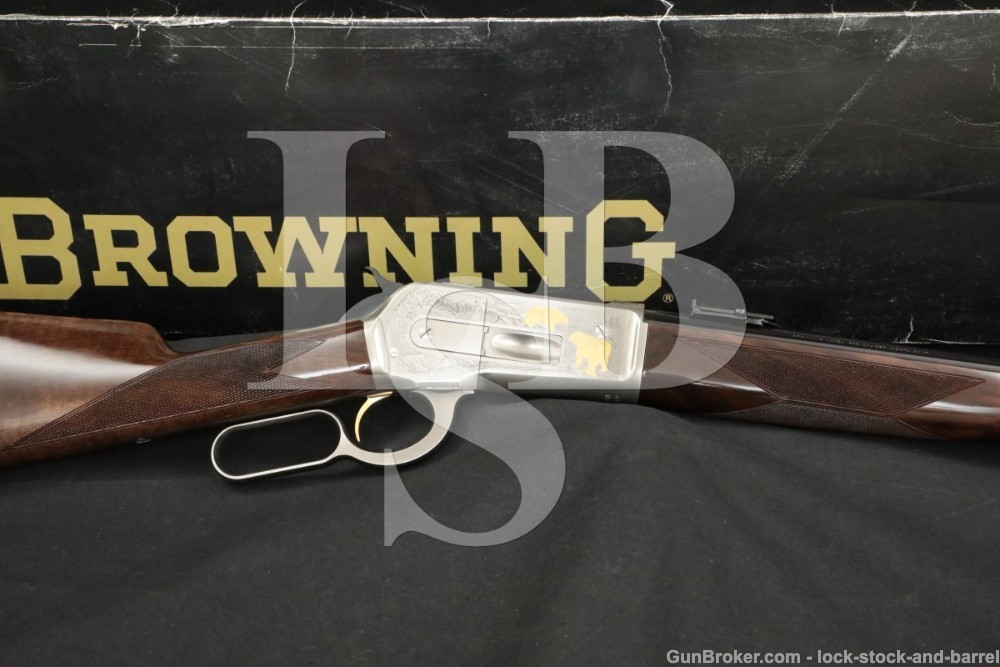 Stock Configuration & Condition: The stocks are two-piece high grade walnut with checkered banded forend, checkered straight grip, sling ring on the receiver, and carbine-style steel buttplate. There are only light handling marks, but otherwise the stocks are free of any notable wear or damage. The checkering is sharp. There are no chips or cracks. The LOP measures 13 1/4? from the front of the trigger to the back of the buttplate. The plate has no evident wear. Overall, the stocks rate in Excellent condition.

Overall Condition: This rifle retains about 96% of its metal finish. The magazine tube has a few minor nicks on the underside and a pair of more notable nicks on the left side. The receiver and barrel are free of any notable wear or damage. The screw heads are sharp. The markings are clear. Overall, this rifle is in about Fine condition.

Box, Paperwork & Accessories: This rifle includes its original serial matching box. The box shows extensive rub wear and there are light-to-moderate creases throughout. The internal foam is intact. The box rates in Good overall condition.

Our Assessment: This is a Browning model 1886 Carbine, a reproduction of the original Winchester which was, ironically, designed by John Browning. The 1886 followed up the 1876, providing a much stronger action which was able to withstand larger and more powerful cartridges such as the .45-70, the issue rifle cartridge of the U.S. Army at the time. The design would later be shrunk for the model 1892. This modern reproduction has the same action and was produced as a limited edition between 1992-1993 with only 3,000 made. This one doesn’t appear to have seen much use, in Fine condition. It retains 96% of its metal finish with a great bore, strong mechanics, and absolutely gorgeous engraving on the receiver and would make a great addition to any collection. This would make a nice hunting rifle that could take just about any game in North America, though in such high condition, it will likely see interest from both Browning and Winchester collectors. If you’re looking for a .45-70 lever gun, you can’t do much better than this. Good luck and happy bidding!